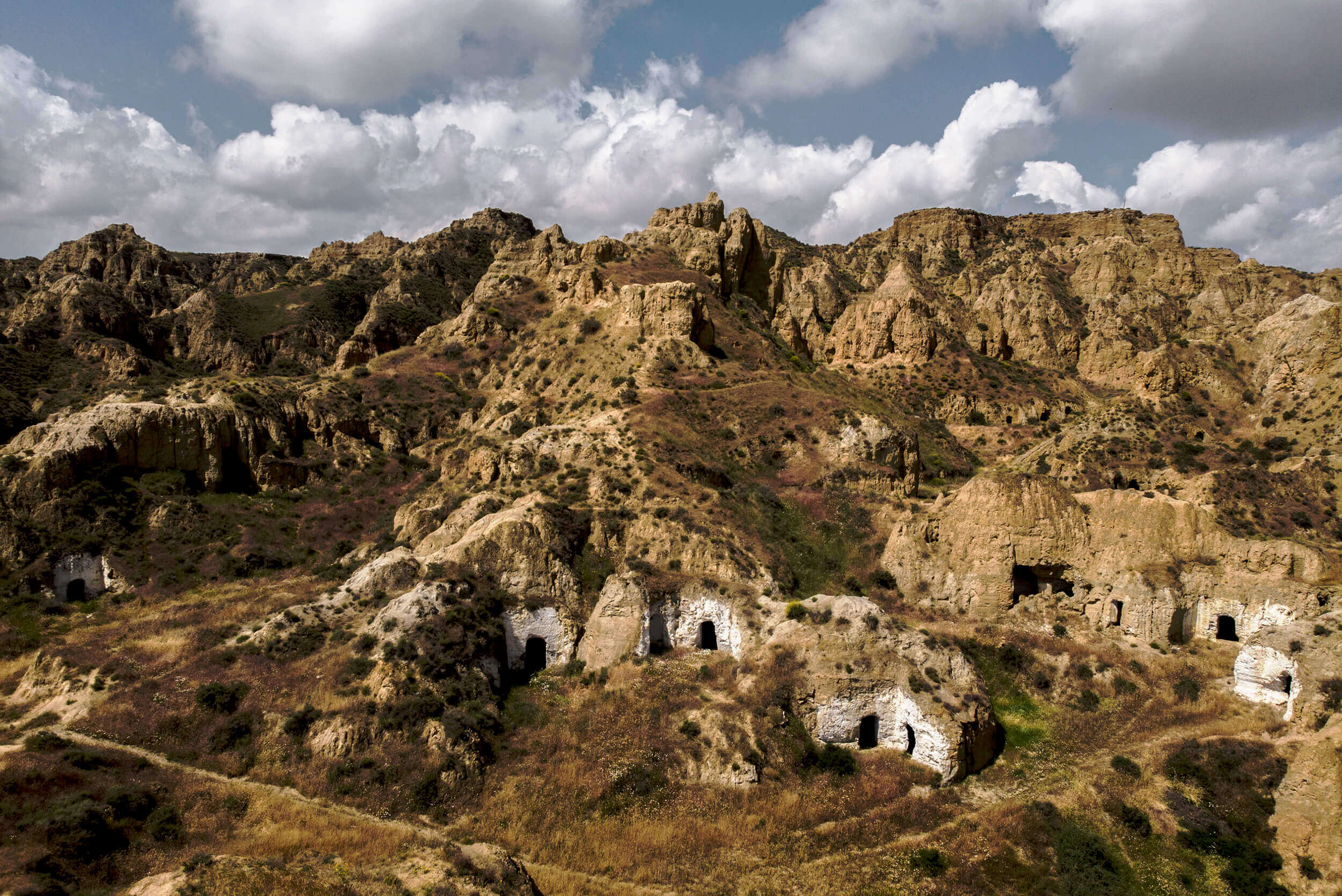 Caves cover the hills of Guadix, a southern Spanish region that hosts around 2,000 caves. For generations, these caves have been used as homes.

‍For thousands of years, caves were the most popular choice for humans to make their homes. The security and isolation that prehistoric populations found in these primitive natural shelters would later be sought by modern cultures. This is the case in southern Spain. Cave-building in Spain began when Arab settlers brought the tradition with them from the troglodyte communities of North Africa. Nowadays, the south of Spain is home to the biggest cave settlement in Europe.

‍
Lying in the foothills of southern Spain’s Sierra Nevada mountains is the city of Granada, where a cave-dwelling community lives in Sacromonte, the "sacred mountain." The caves first served as a shelter from storms and wild animals. Later, after the 1492 conquest of Granada by the Catholic kings, the area’s Muslim and Jewish populations were ordered to convert to Christianity or face expulsion. Instead, these residents moved into the caves of the Sacromonte hill together with the nomadic Gypsy community. Because the area was considered a marginal frontier, the population was safe from administrative control and the ecclesiastical order. Most of the Muslim, Jewish and Gypsy families escaped to Guadix and nearby towns, making their cave houses as a way of protection and survival. Nowadays, the caves are home to a unique and quietly proud community that prefers the peaceful solitude of the mountains, over a busy modern life.

‍
Today, the Sacromonte hill is divided in two. The highest and most rugged part of the hill is occupied by squatters, who live in a kind of no-man's land created by legal vacuums. This makes it easier for people to occupy the caves illegally. On the lower part of the Sacromonte hill, Gypsies and their descendants make up the bulk of the population, especially those with deeper roots and family ties who have returned to recover their ancestral homes. The traditional Spanish flamenco was born in the caves of Sacromonte more than 500 years ago, and to this day these families retain their traditional cave lifestyle with more strength than ever.


Guadix and its neighboring towns, also inhabited by cave-dwelling communities, have grown into a more traditional way of life. Today, Guadix is considered to be the "European Capital of Caves." All inhabitants have legal permission to live in their caves, and about 4,500 people are believed to do so. A quiet mood surrounds the area’s impressive geological rock formations, which host approximately 2,000 underground houses over an area of 200 hectares. 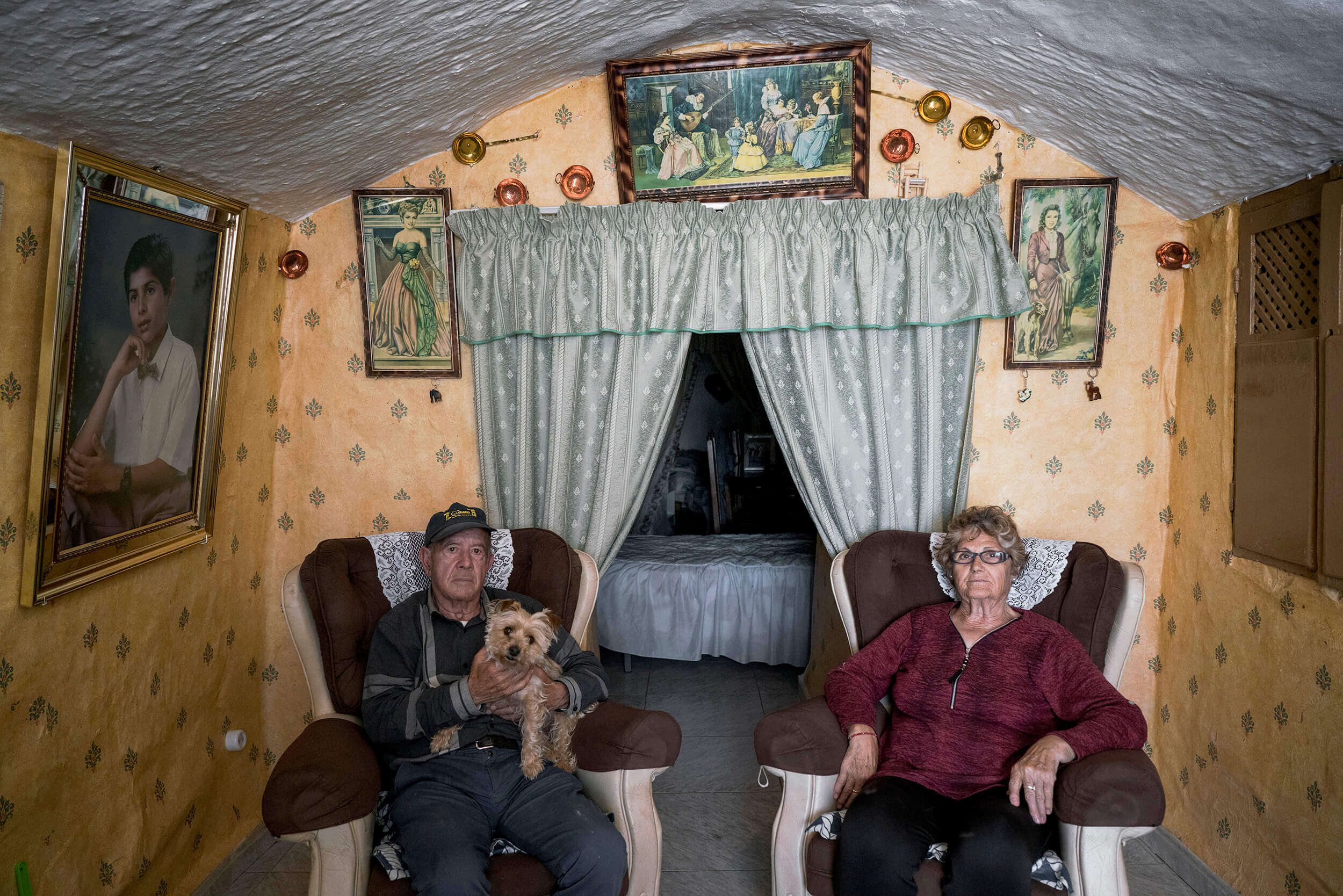 Manuel Gonzales and Encarna Sanchez pose for a portrait in their living room. Their cave is Encarna’s family home; she was born and raised here. Manuel, who also grew up in the caves of Guadix, now lives with her and their dog. 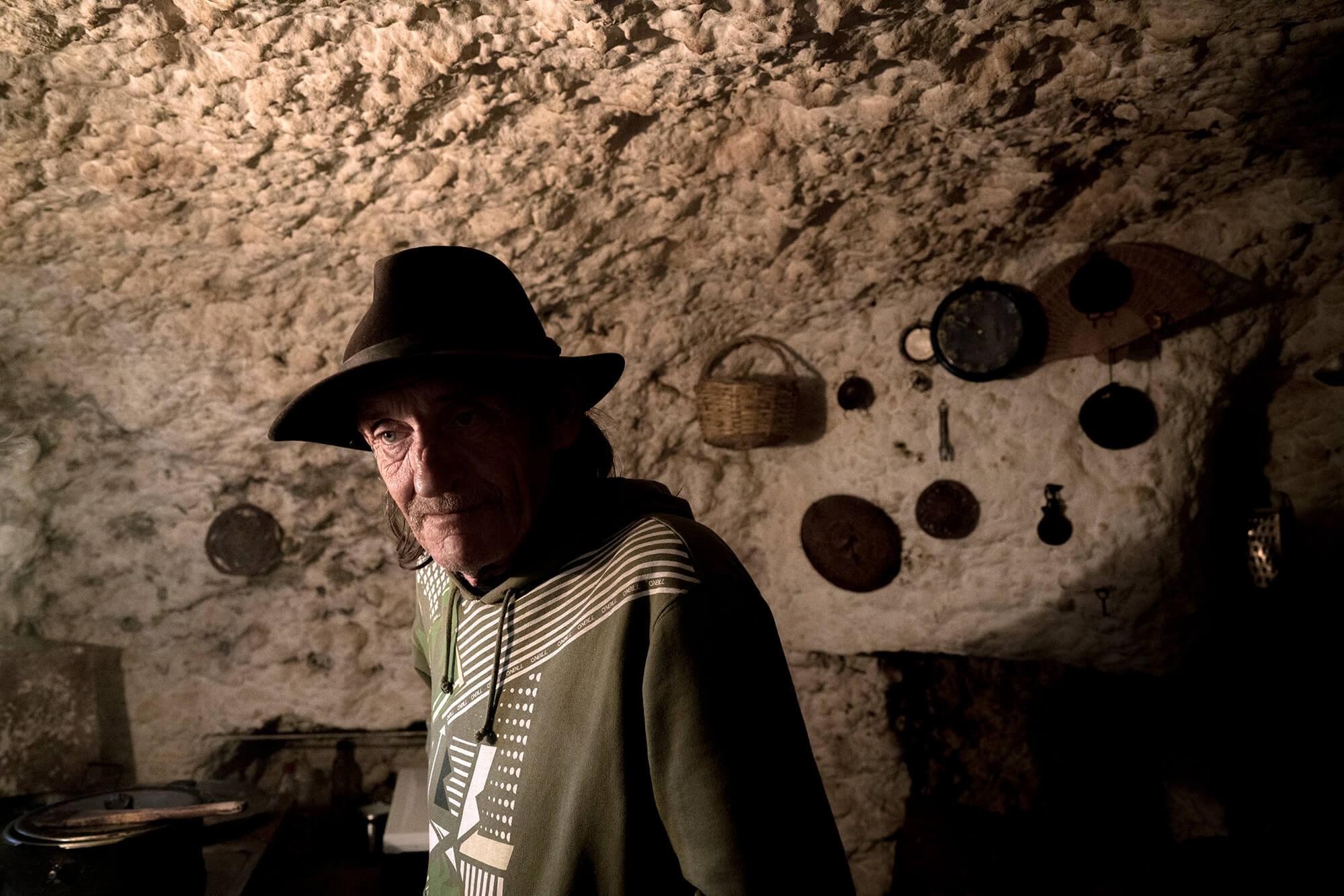 Eric, a German immigrant, has lived in the caves of Sacromonte since 1998. To make a living, he performs classic rock songs in the streets of Granada. 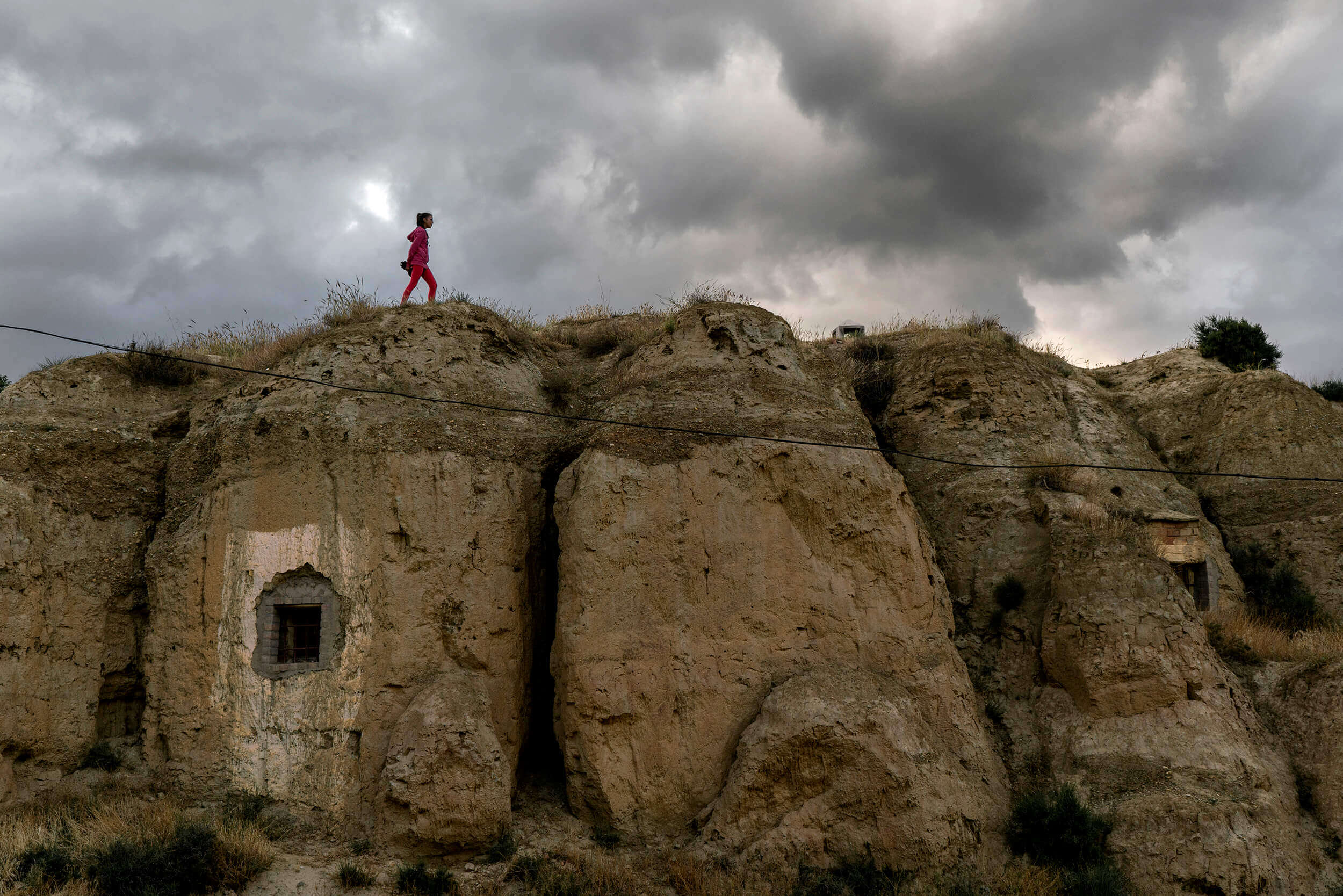 Judith, a 12-year-old girl who lives in Guadix, walks over the roof of a cave dwelling. The region has been home to underground residents for hundreds of years. 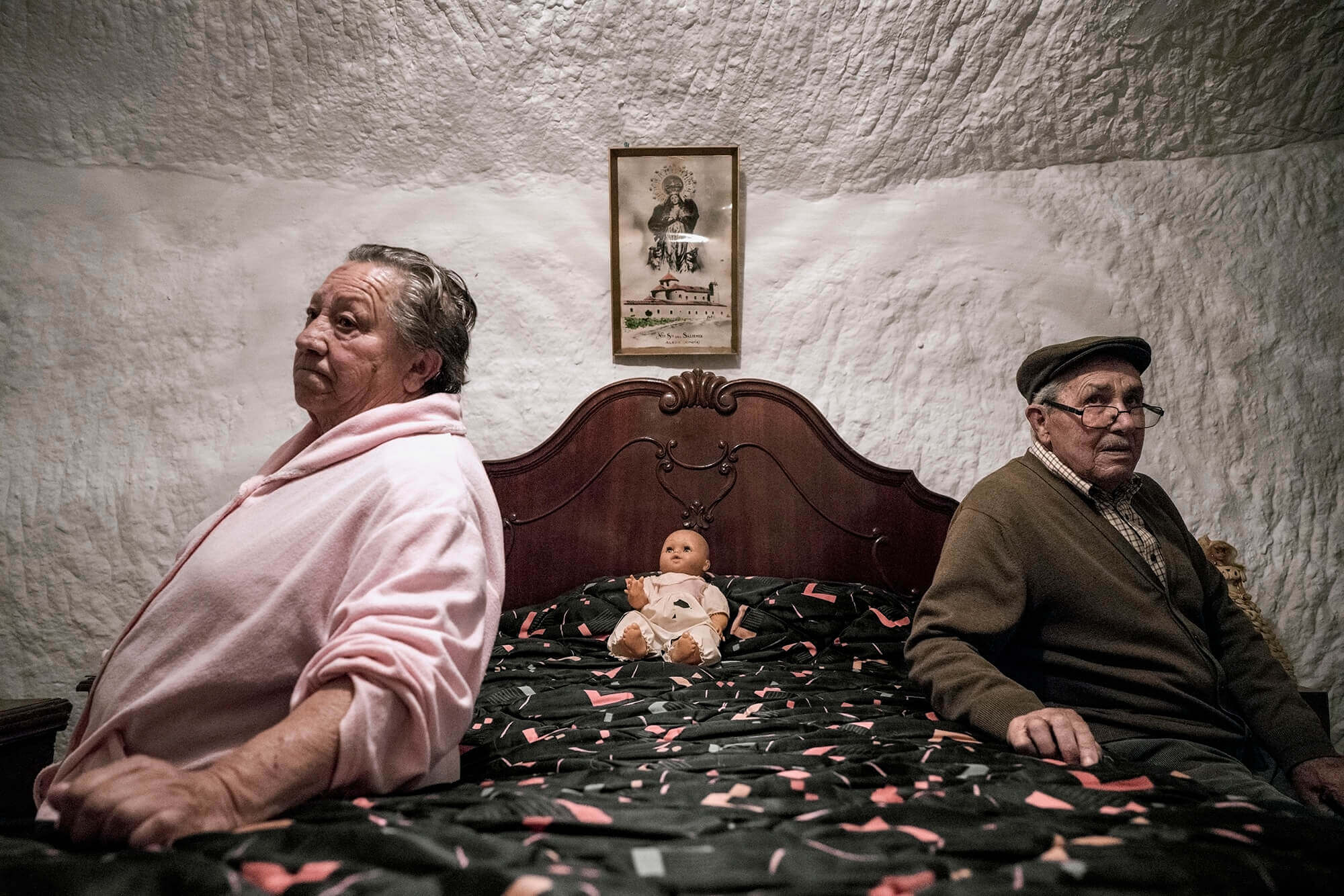 Piedad Mezco and Antonio Ortiz have lived their whole lives in the caves of Guadix. They were both born inside a cave and raised in the hills. In the past, Antonio worked on a farm and Piedad made wooden chairs. 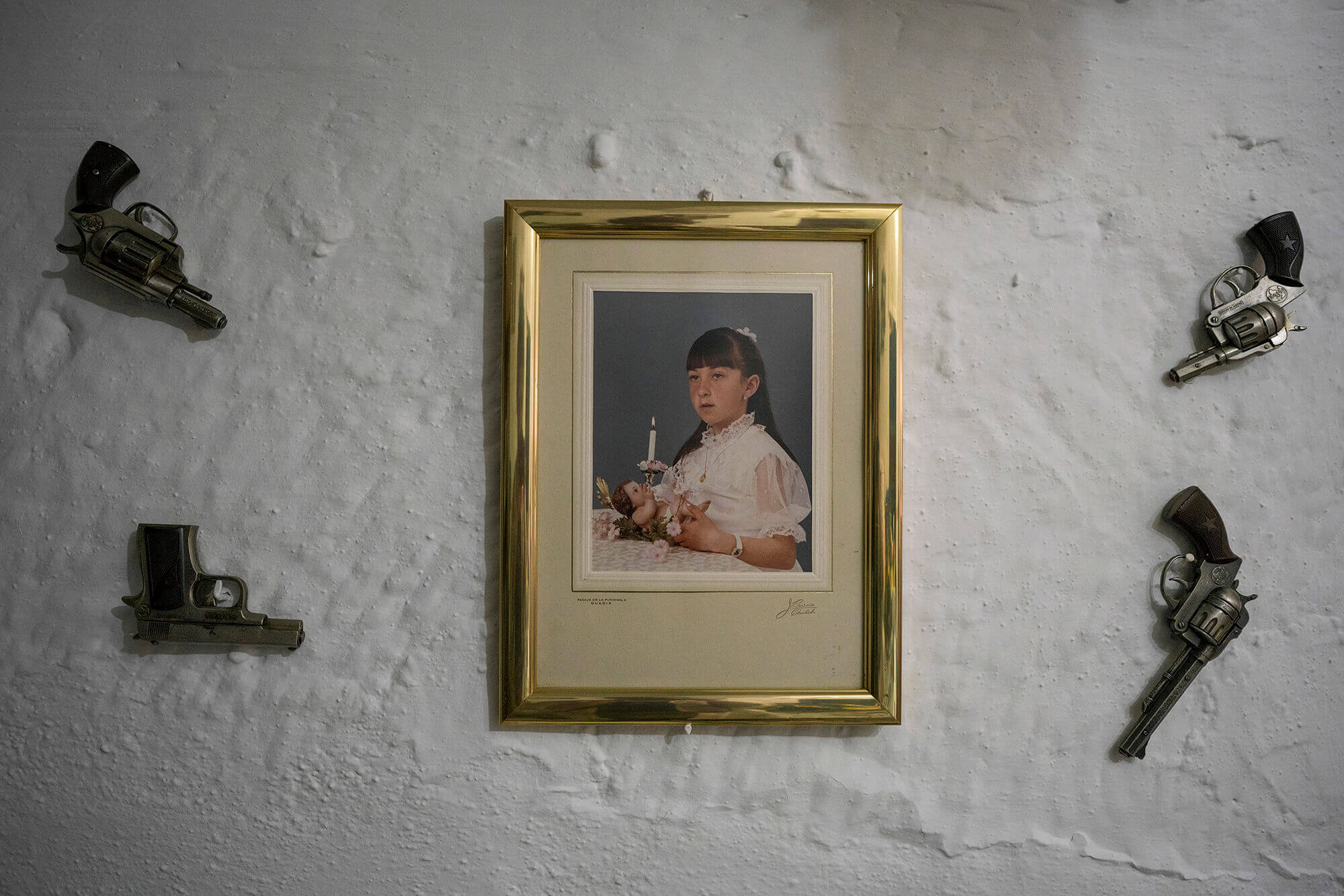 Unique decor is common in the caves of Guadix. Here, a resident hangs four pistols around an image of his niece at her first communion. 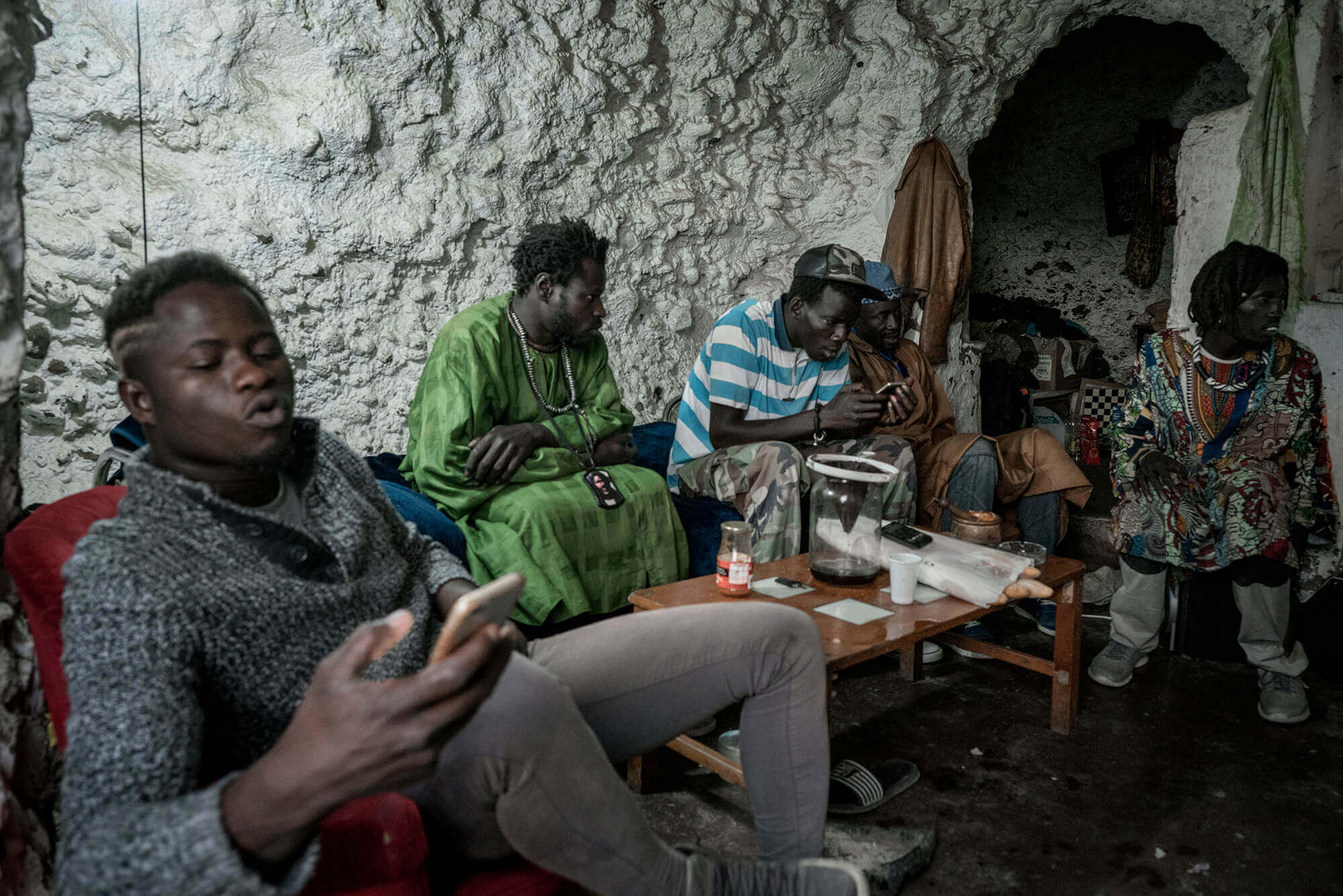 Senegalese immigrants sit inside a cave in the upper portion of the hills. Though the Sacromonte caves are known for being home to a large community of Spanish Gypsies, residents of the caves come from all over the globe. 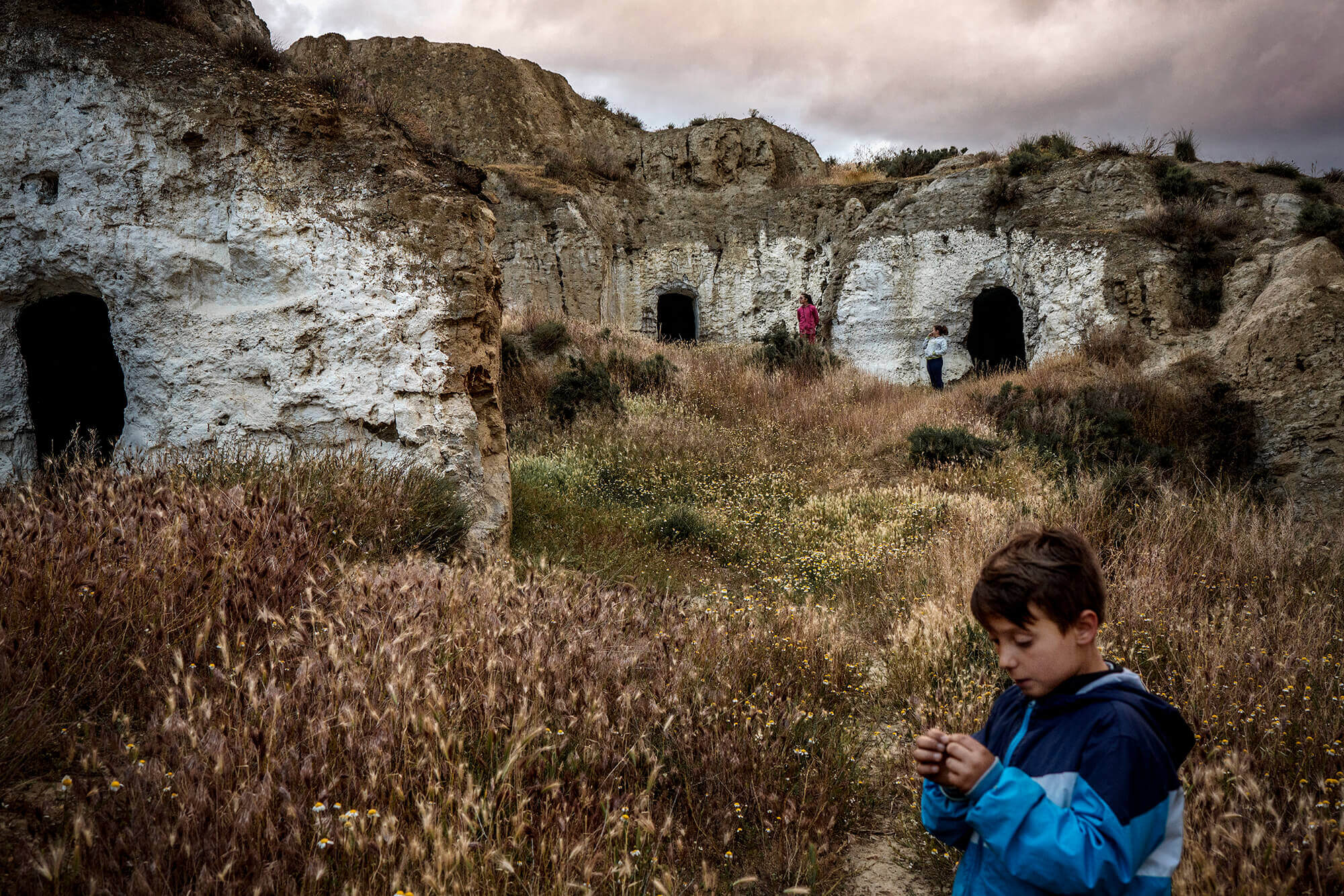 Children play in abandoned caves next to their homes. While every cave was occupied in the past, there are now multiple empty residences in Guadix. 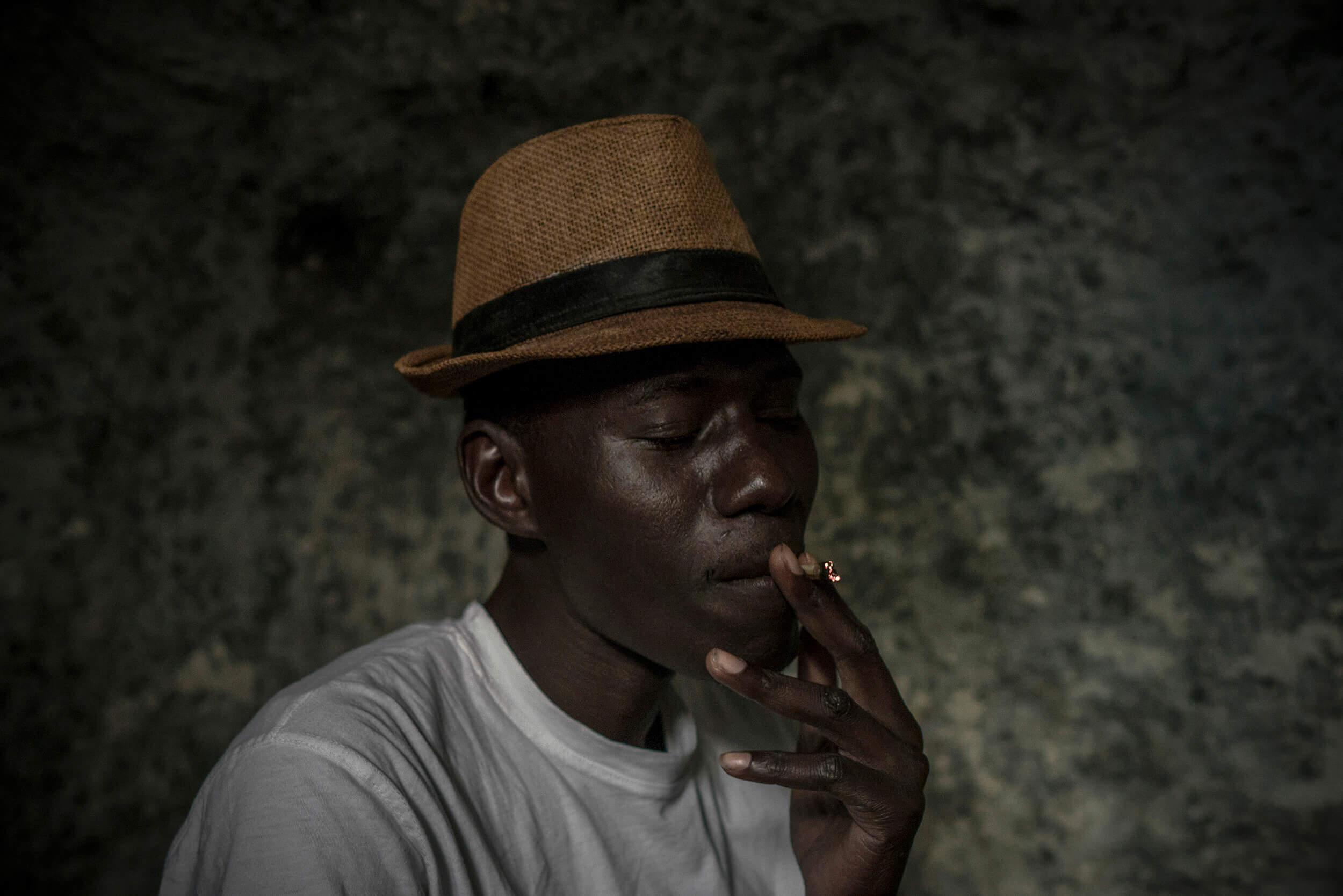 Mbacke, who says he lives in the caves for economic reasons, smokes tobacco inside his home. 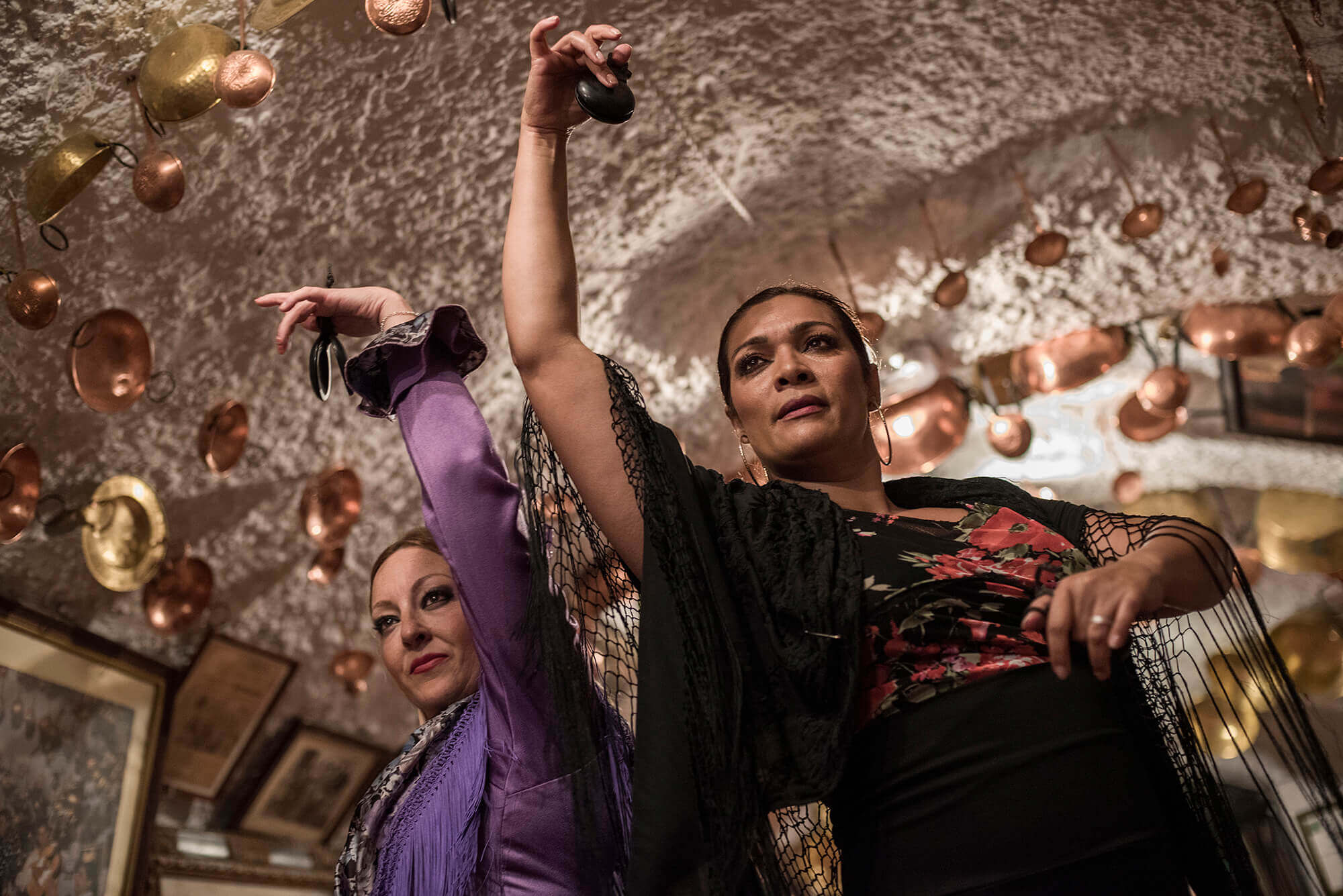 Two women dance flamenco in the caves of Sacromonte. The traditional Spanish dance was born in the region more than 500 years ago, and community members continue to perform nightly in the caves. 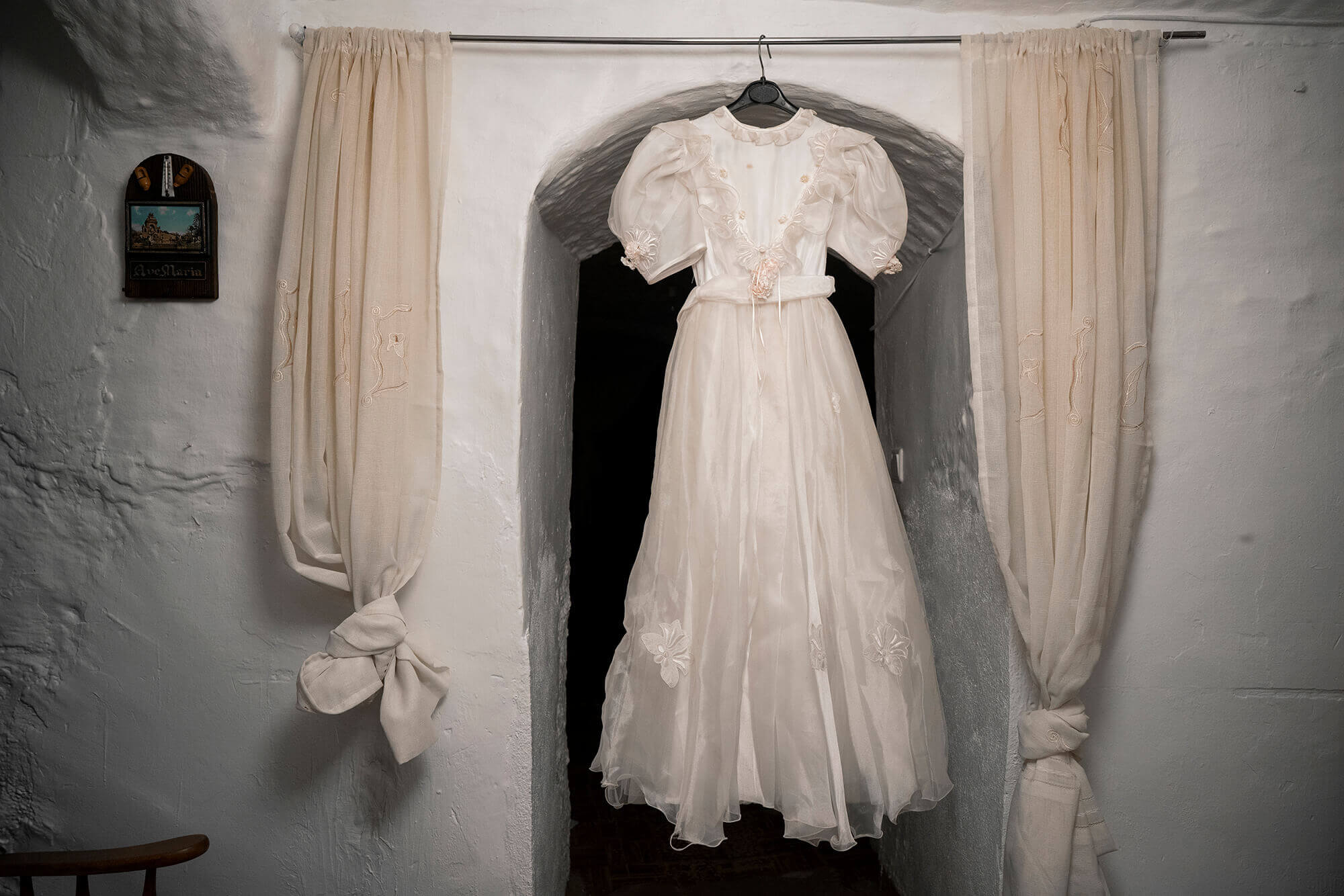 Nerea's white dress hangs in the hallway of the cave where she lives. Every year, girls dress in long, white dresses and boys dress up like sailors to celebrate the Lord's Day at the cathedral in Guadix. 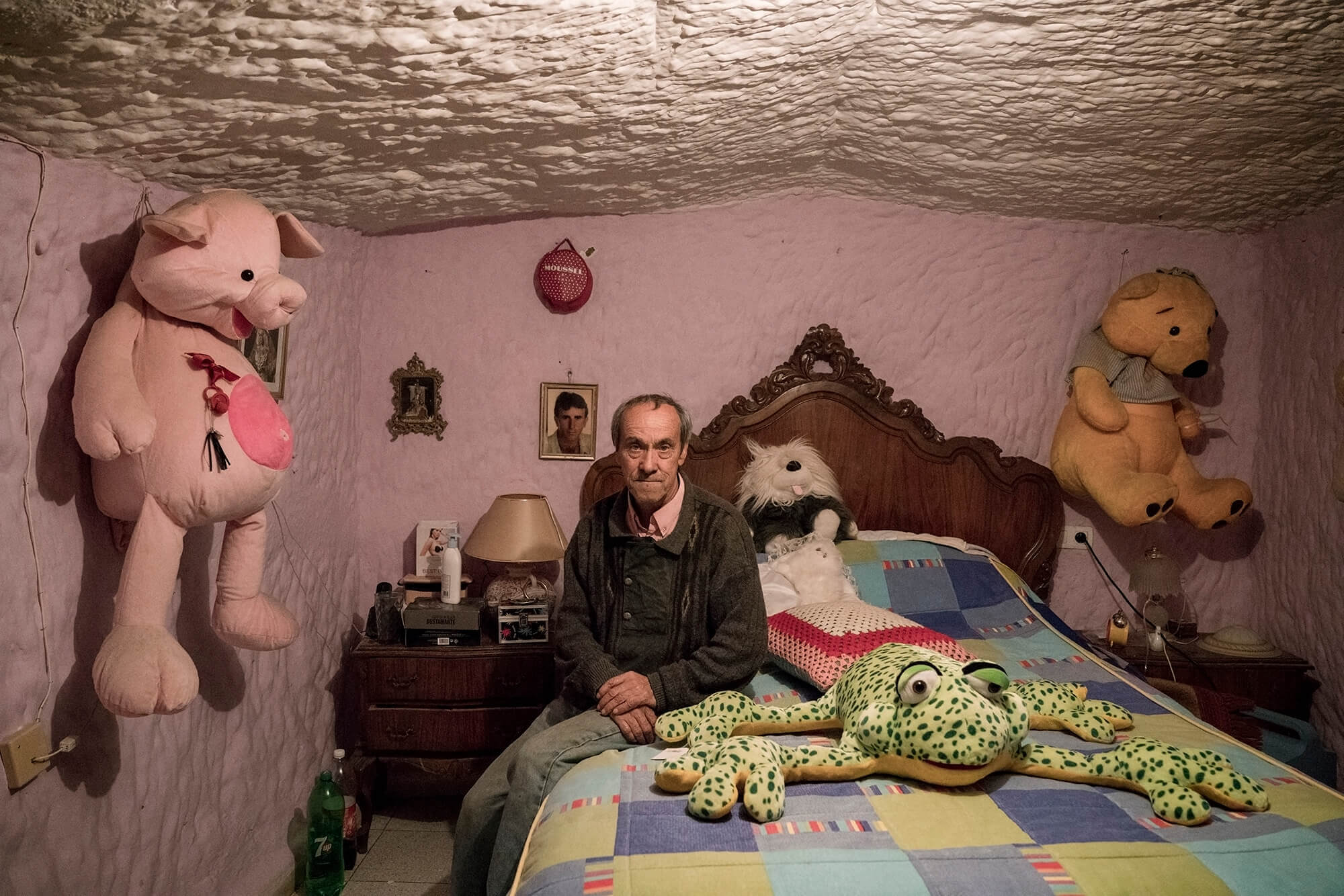 Tocuato Lopez was born in the caves of Guadix and has lived here all his life. When he married for the second time, he bought a new cave for his wife and their two children. His room is located deep in the formation, and does not have any windows or natural light. 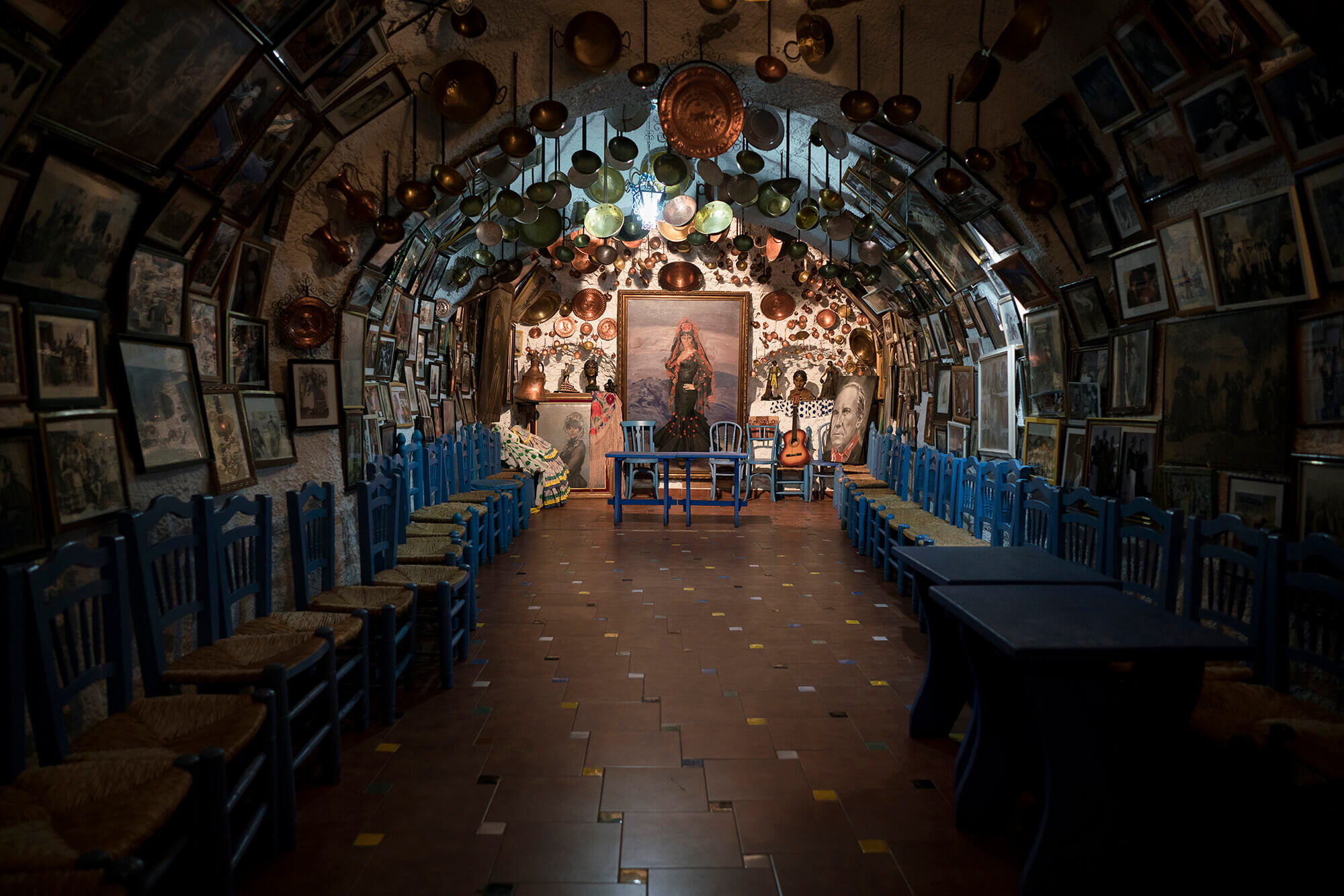 Lights shine inside the cave where flamenco dancers perform every evening. A similar dance was a wedding tradition for the “gitano” community, but was banned in the 16th century. The dancers of the Sacromonte continued performing in secret, shaping the dance into the flamenco that is performed today. 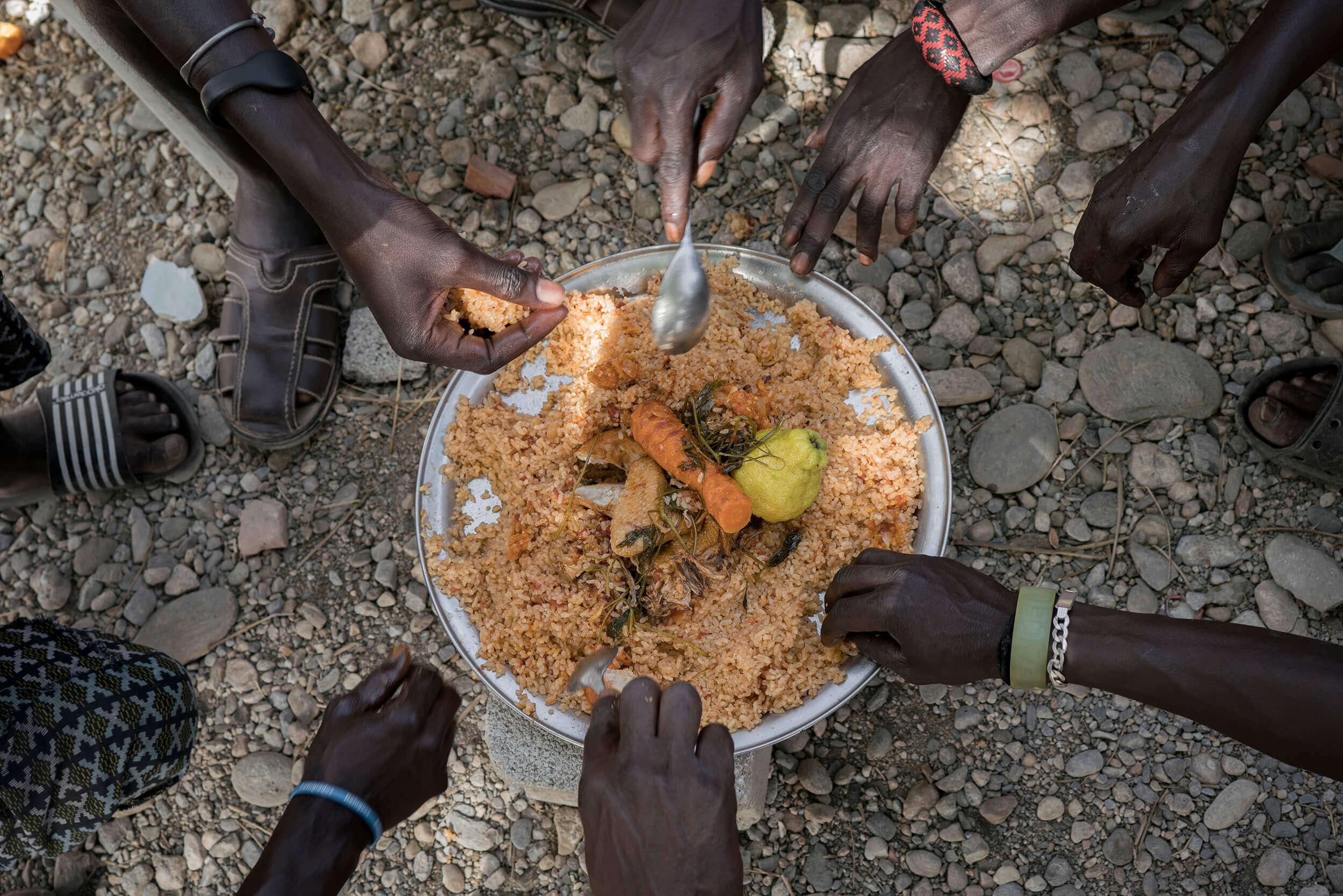 Members of the Sacromonte Senegalese community share a daily meal. Every day, a member of the community cooks a big portion of food and shares it with their neighbors. 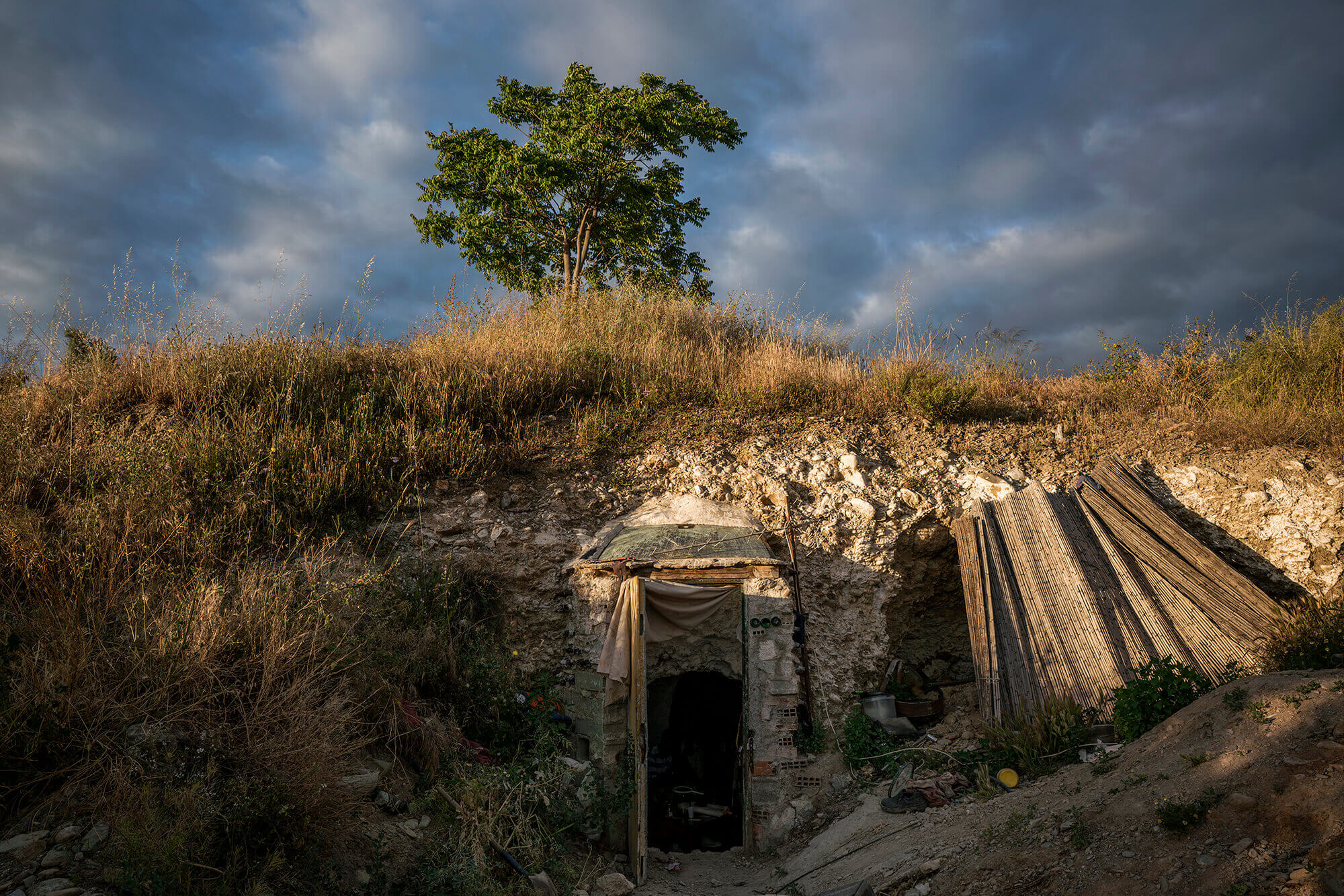 The front door of a cave protrudes slightly out of a rocky wall in Sacromonte. Many of these caves exist in a legal gray area, allowing for easy, and occasionally illegal, occupation.