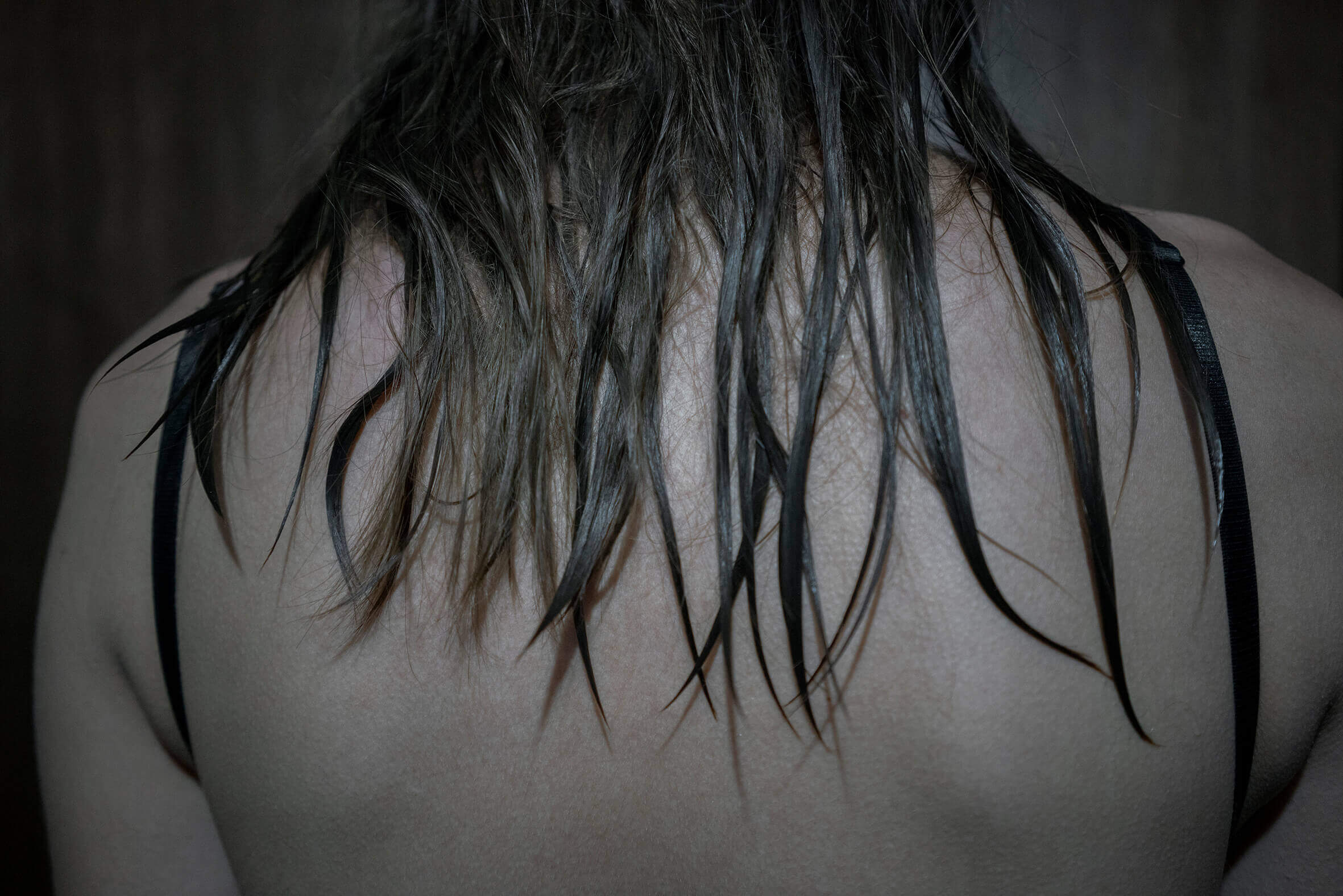 Maria Fernanda gets dressed after getting out of the shower, and prepares to go to an appointment with a psychologist at Condesa Clinic. She spent a year receiving psychological and psychiatric treatment, after suffering sexual harassment and an assault.

Mexico has the second-highest rate of murder and violence against the transgender community in the world. The discrimination, violence and exclusion perpetuated by Mexico’s “macho” society as a drastic effect on the lives of transgender people. The security and human rights of these people are vulnerable, and constantly violated. Nevertheless, Mexico offers some of the most progressive laws for transgender people, including hormonal treatment at no cost as well as legal options for people to change their name and gender identity.

‍
Since July 2009, La Condesa Clinic in Mexico City has offered a free gender change service that includes hormonal, physical and psychiatric treatment. Although the program requires clients to meet certain parameters around 1,700 trans women and men from different parts of the country have already approached the clinic to begin treatment. On March 13, 2004, amendments to the Mexico City Civil Code allowed transgender people to change their gender identity and the name recorded on their birth certificates, so they can legally transition into their new gender.

‍
Maria Fernanda, a 25-year-old transwoman from Mexico City, has received free hormonal treatments at La Condesa Clinic since 2015. She is an example of the successful results that are possible for transgender people when governments offer progressive solutions. On May 31, 2015, Maria Fernanda changed her given name, “Mario Eduardo” to “Maria Fernanda,” and changed her assigned sex to female on her new birth certificate. Nowadays, Maria Fernanda is pursuing a degree in informatics and creating her own fashion brand, breaking stereotypes commonly associated with transgender people.

‍
The birth certificate law, coupled with free hormonal and psychological treatment, has become an engine of social change among the trans community in Mexico. Thanks to this, transgender people have access to the health care system, suffer less discrimination, and have better job opportunities. All of this has given the trans community a better quality of life, avoiding the sex or entertainment industry work that was once their only option. While the United States and other countries move towards more discriminatory policies against transgender people, Maria Fernanda's life in Mexico challenges misconceptions over the lack of human rights in “developing” countries. 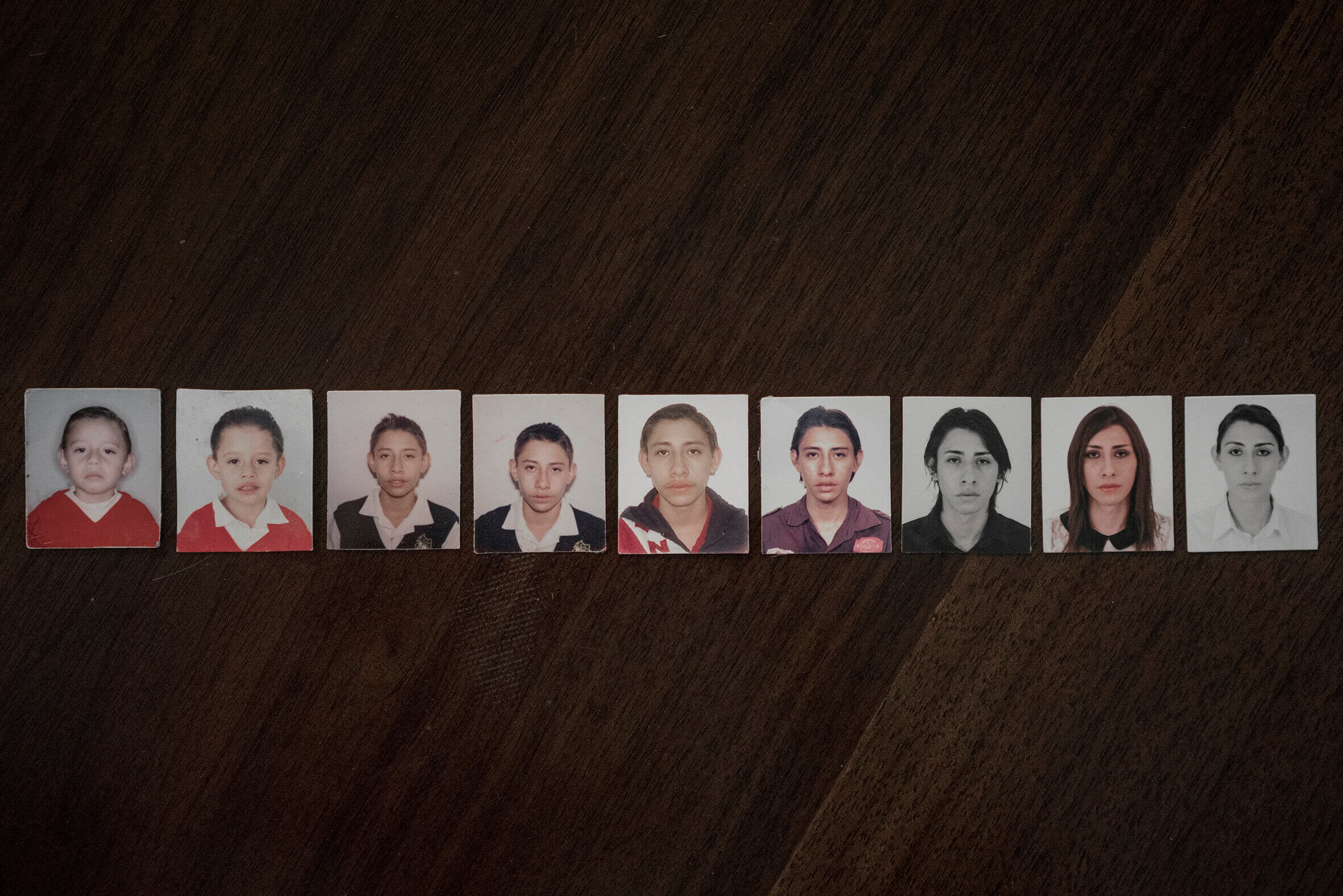 A timeline is made with ID photos of Maria Fernanda. The first picture was taken when Maria Fernanda was around 3 years old, and the last was taken to enroll her new name and gender on her university certificate. This photograph was intentionally arranged in chronological order to show the physical changes that Maria Fernanda has gone through in the process of transitioning from a man to a woman. 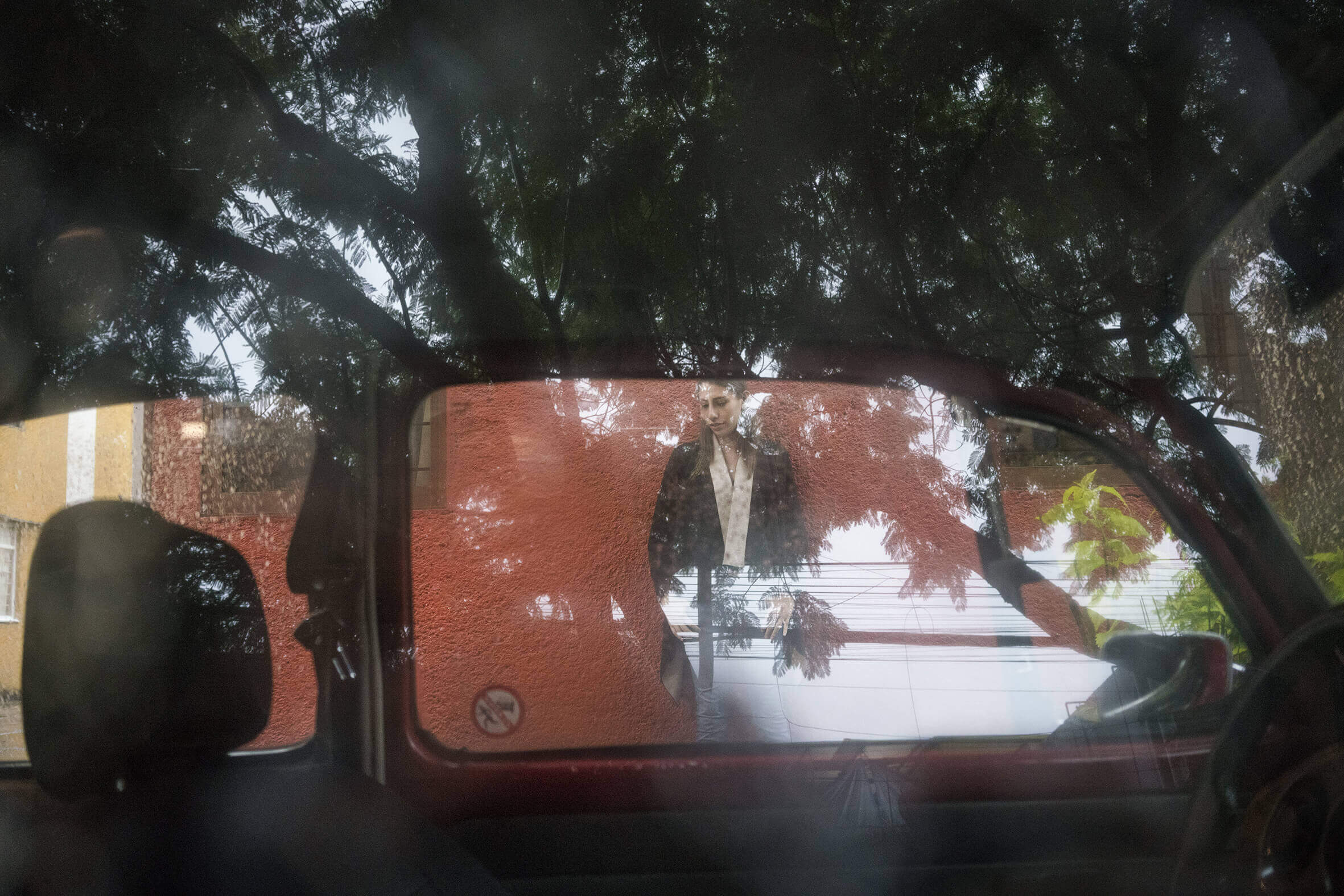 Maria Fernanda waits for the bus outside her house to go to a psychological appointment at Condesa Clinic. 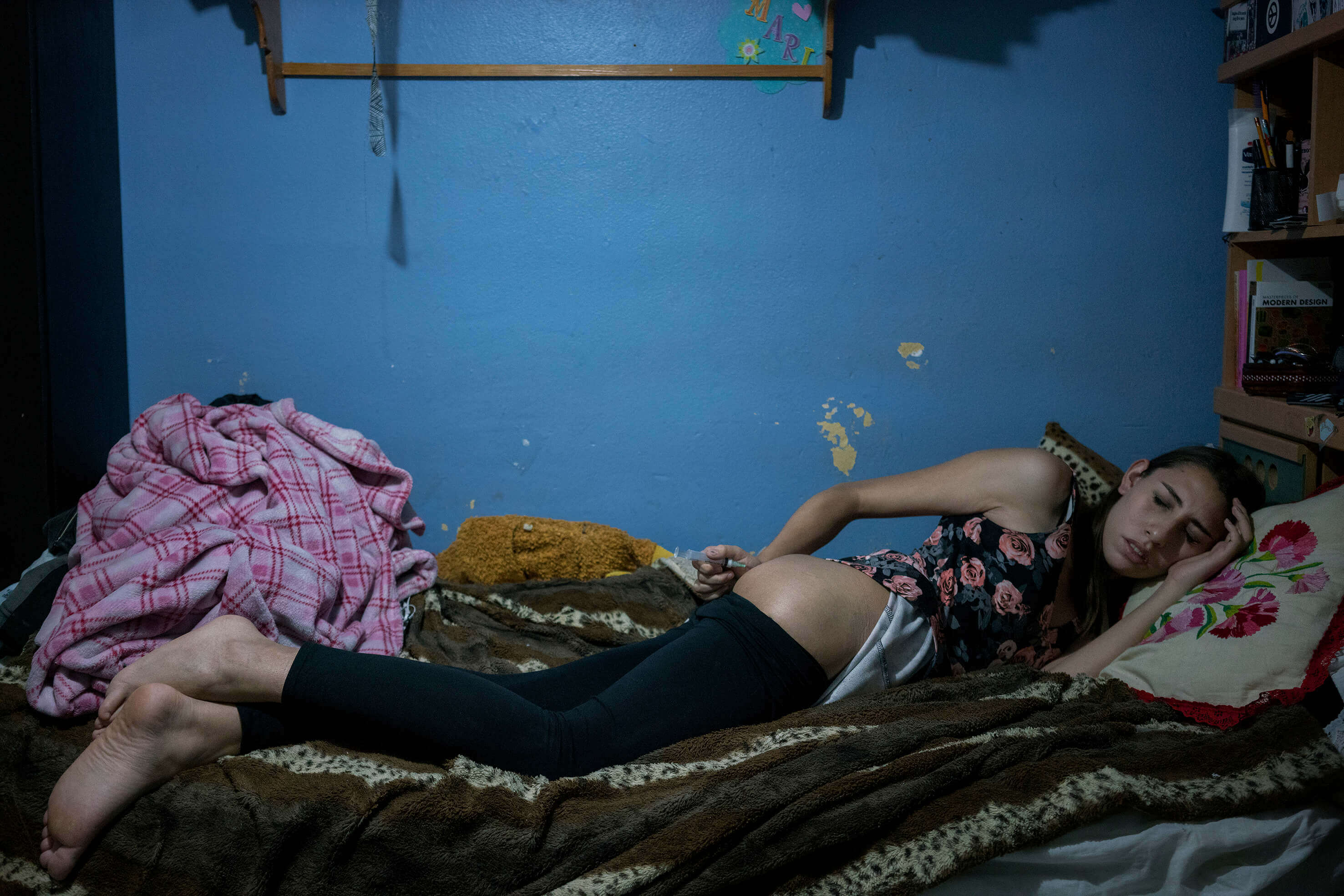 Maria Fernanda lies on her bed as she gives herself a monthly injection of estrogen as part of her gender change treatment. Hormone injections are used to change the secondary sexual characteristics of transgender people, such as breasts and a feminine pattern of hair, fat, and muscle distribution. This injection is part of a free treatment offered by La Condesa Clinic, where Maria Fernanda has undergone a gender change treatment since 2015. Before starting her treatment at La Condesa Clinic, Maria Fernanda used to self-medicate with hormone pills. She stopped taking the pills after three years, due to a possible thrombosis on her leg. 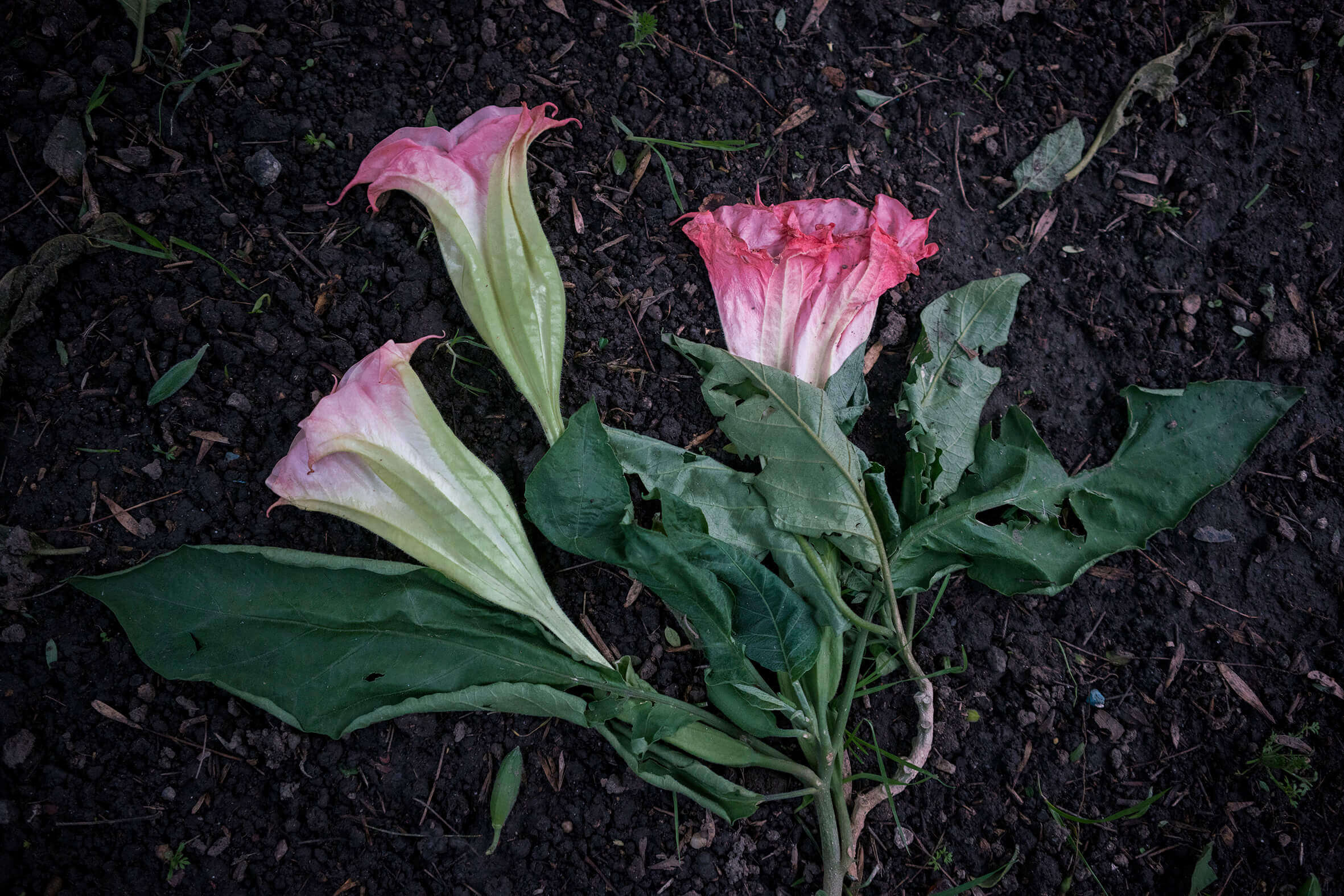 Three floripondio flowers lie dead on the ground. Mexicans use the word “floripondio” as a slur for a person who is gay. The floripondio flower is also a hallucinogenic drug, if ingested. It’s occasionally used by thieves and rapists, but it also has an important role in shamanistic, magic and religious rituals. 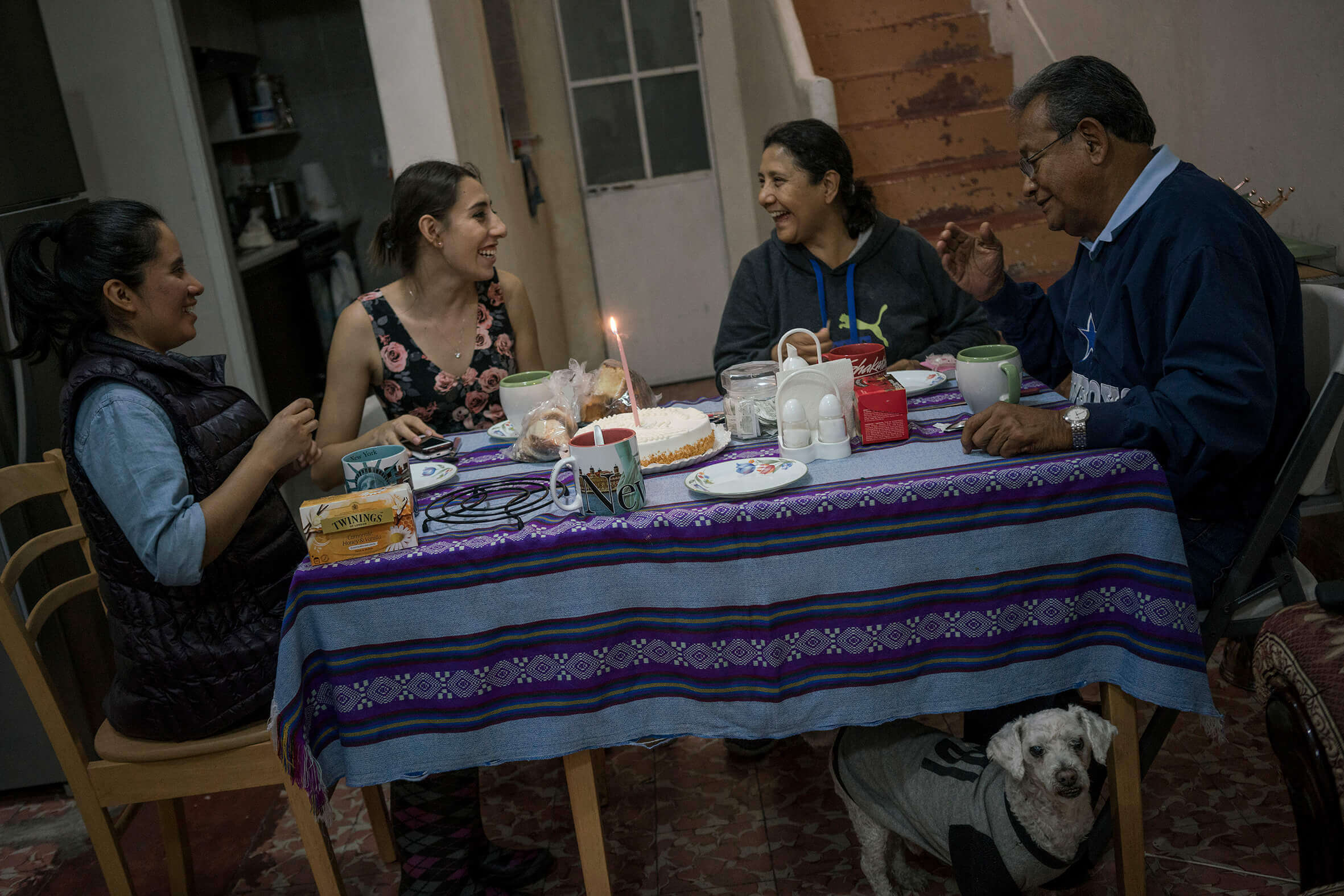 With her mother and stepfather, Maria Fernanda celebrates the birthday of her girlfriend Ana, left, a 26-year-old Mexican woman. Maria Fernanda and Ana have had a serious relationship for a year and a half. 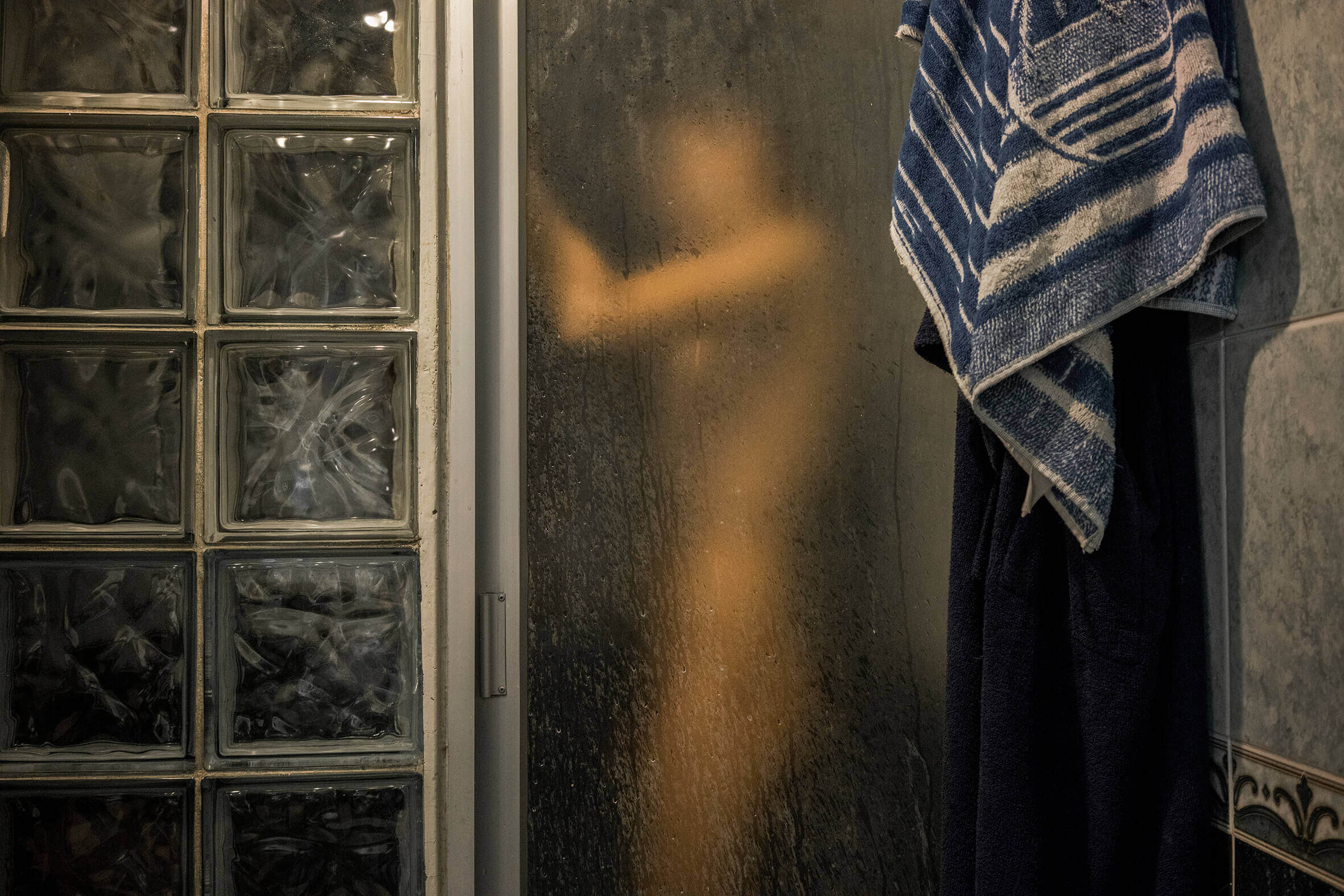 Maria Fernanda takes a shower at her apartment in Mexico City. She says she feels like a woman, feeling no need to have a gender reassignment surgery to remove her masculine sexual organs or have breast implants. The reassignment surgery usually consists of removing the testicles and the head of the penis to create a clitoris. The shaft and the scrotum are then used to create the labia and vaginal canal, which allows many patients to have a perfectly healthy sex life. It also carries serious medical risks. 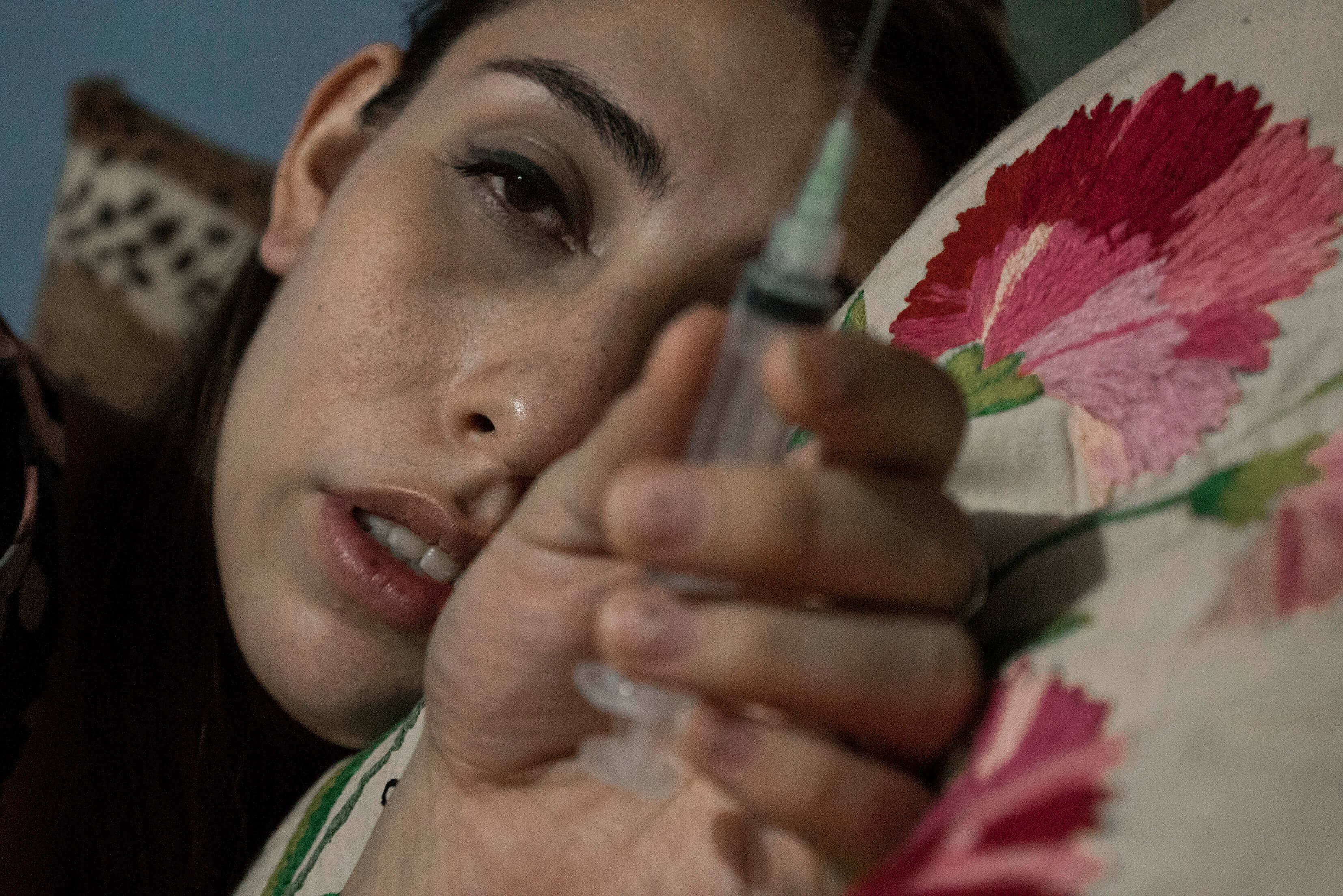 Maria Fernanda lies on her bed while she puts herself a monthly injection of estrogen hormones as part of her gender change treatment. Hormone injections areThis treatment is used to change the secondary sexual characteristics of transgender people from masculine to feminine and develop the secondary sex characteristics of the desired sex, such as breasts and a feminine pattern of hair, fat, and muscle distribution. This injection is part of athe free treatment offered by La Condesa Clinic, where Maria Fernanda has undergone gender change treatment since 2015. Before starting her treatment at La Condesa Clinic, Maria Fernanda used to self-medicate with hormone pills. She stopped taking the pills , and finally after three years, she decided to quit due to a possible thrombosis on her leg. 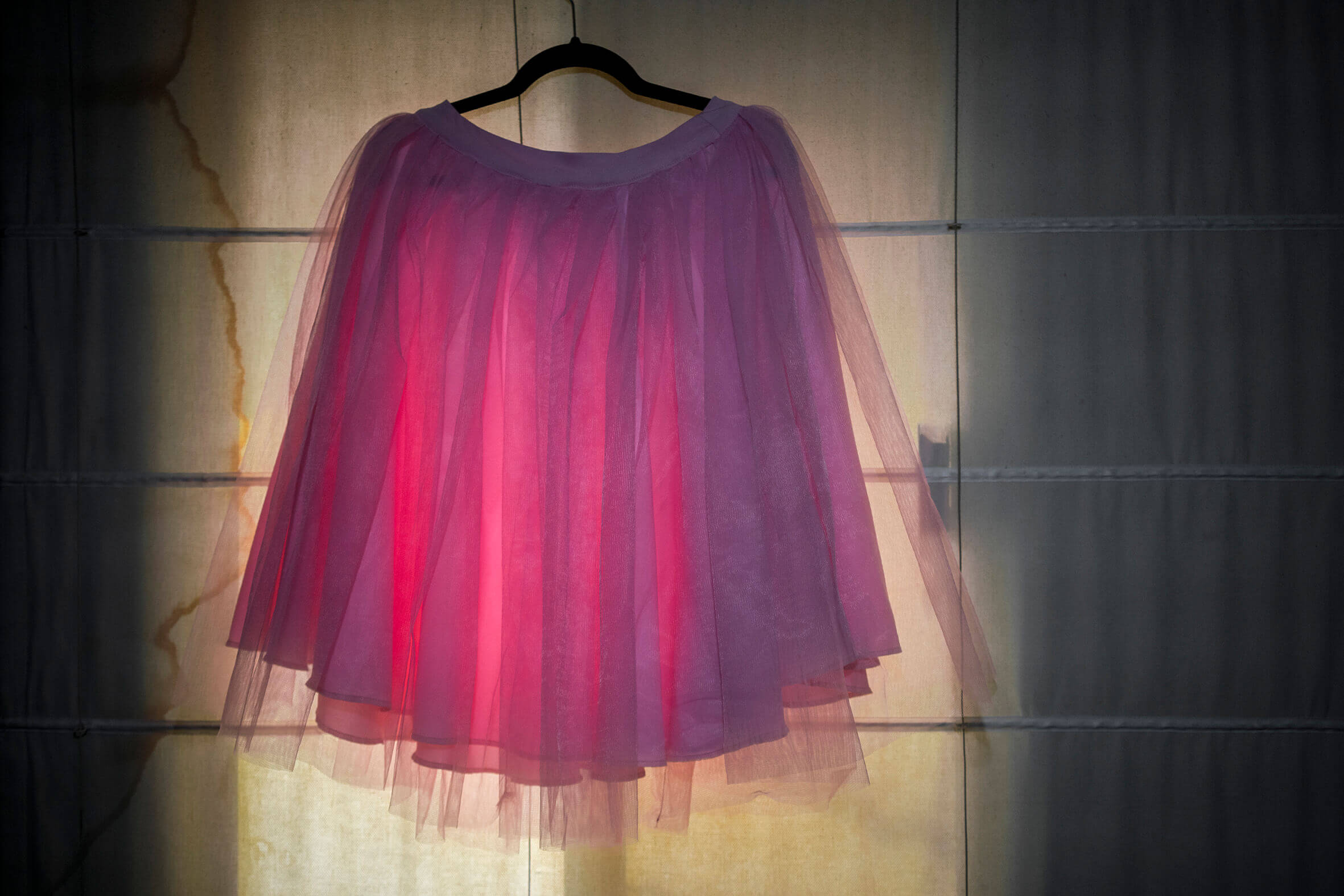 A pink skirt hangs on the window of Maria Fernanda’s bedroom. This skirt was one of the first feminine clothes Maria Fernanda bought when she started to dress as a woman. She said she felt like a ballerina or a princess when she wore it. Today Maria Fernanda is creating her own fashion brand, and for her this skirt is a very special possession. 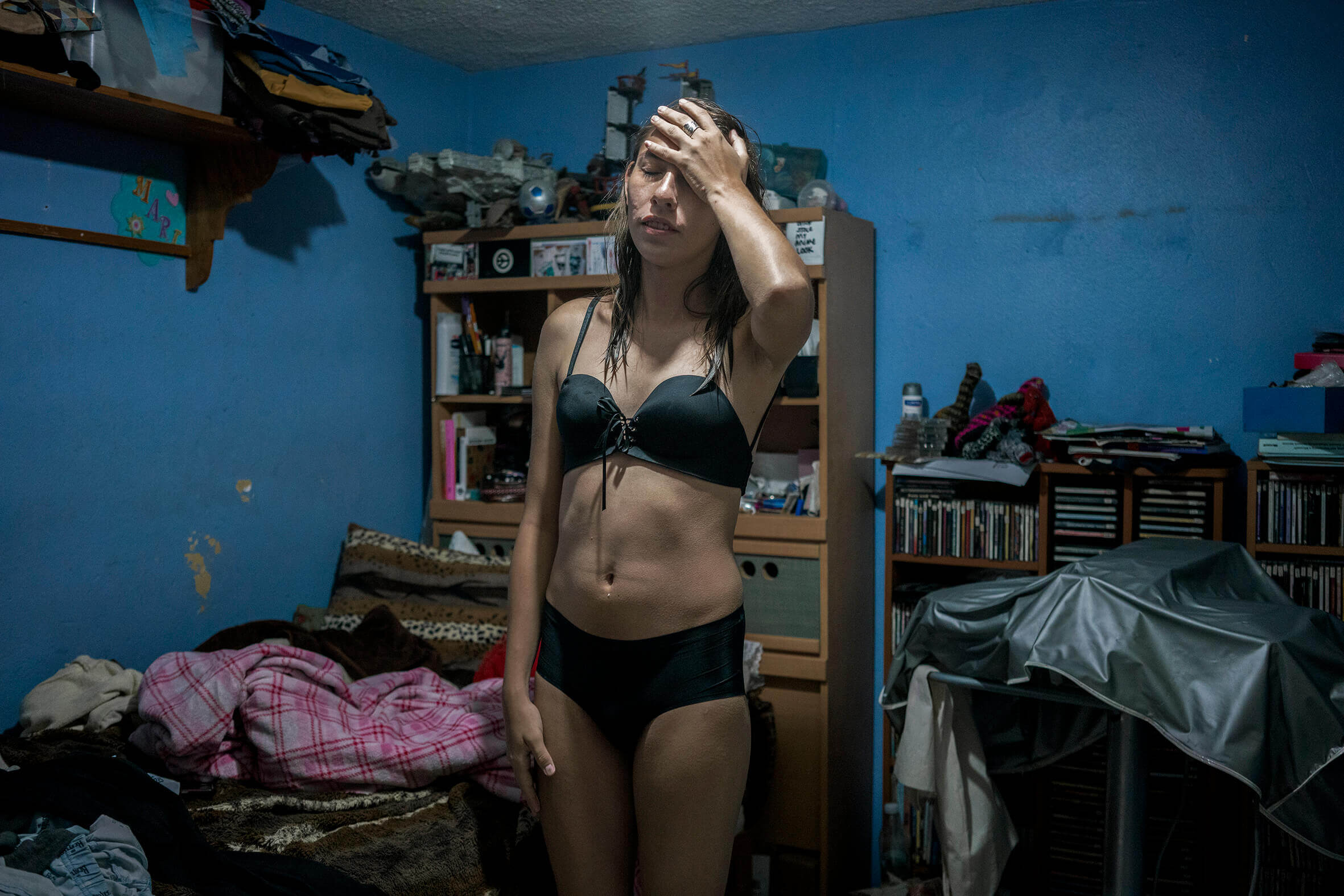 Maria Fernanda, a 25-year-old Mexican transgender woman, gets dressed after a shower and prepares herself to go to a psychiatric appointment. In 2015, she started her gender change treatment at La Condesa Clinic. Nowadays she receives psychiatric treatment at the same clinic, after suffering two sexual harassment assaults at the end of 2016 and the beginning of 2017. 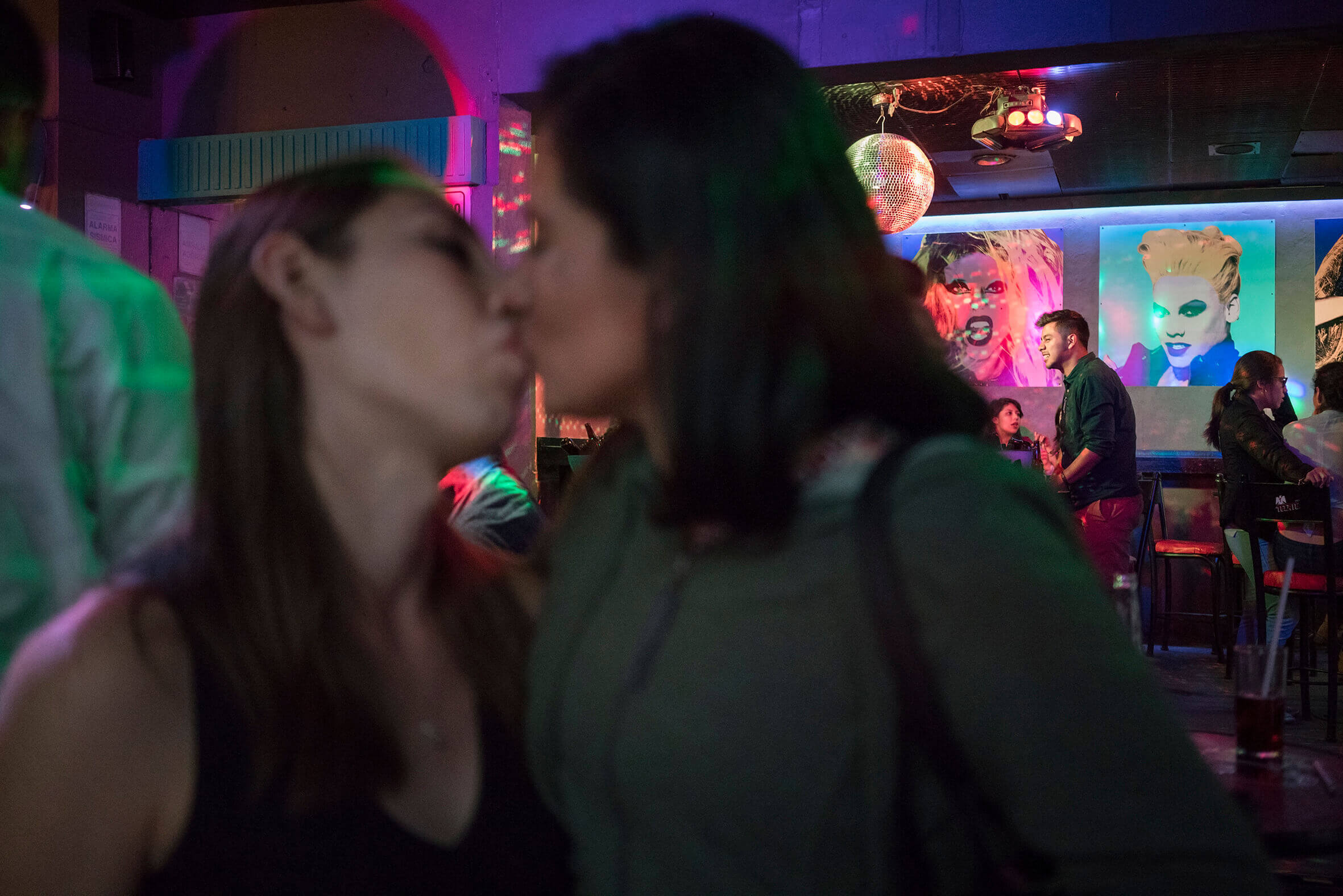 Maria Fernanda and her girlfriend Ana kiss at a gay bar in the Zona Rosa neighborhood. Zona Rosa was the first public place in Mexico City to open for the LGBT community, with several clubs and restaurants. There is no discrimination of any kind, so Maria Fernanda and Ana can express their love freely. 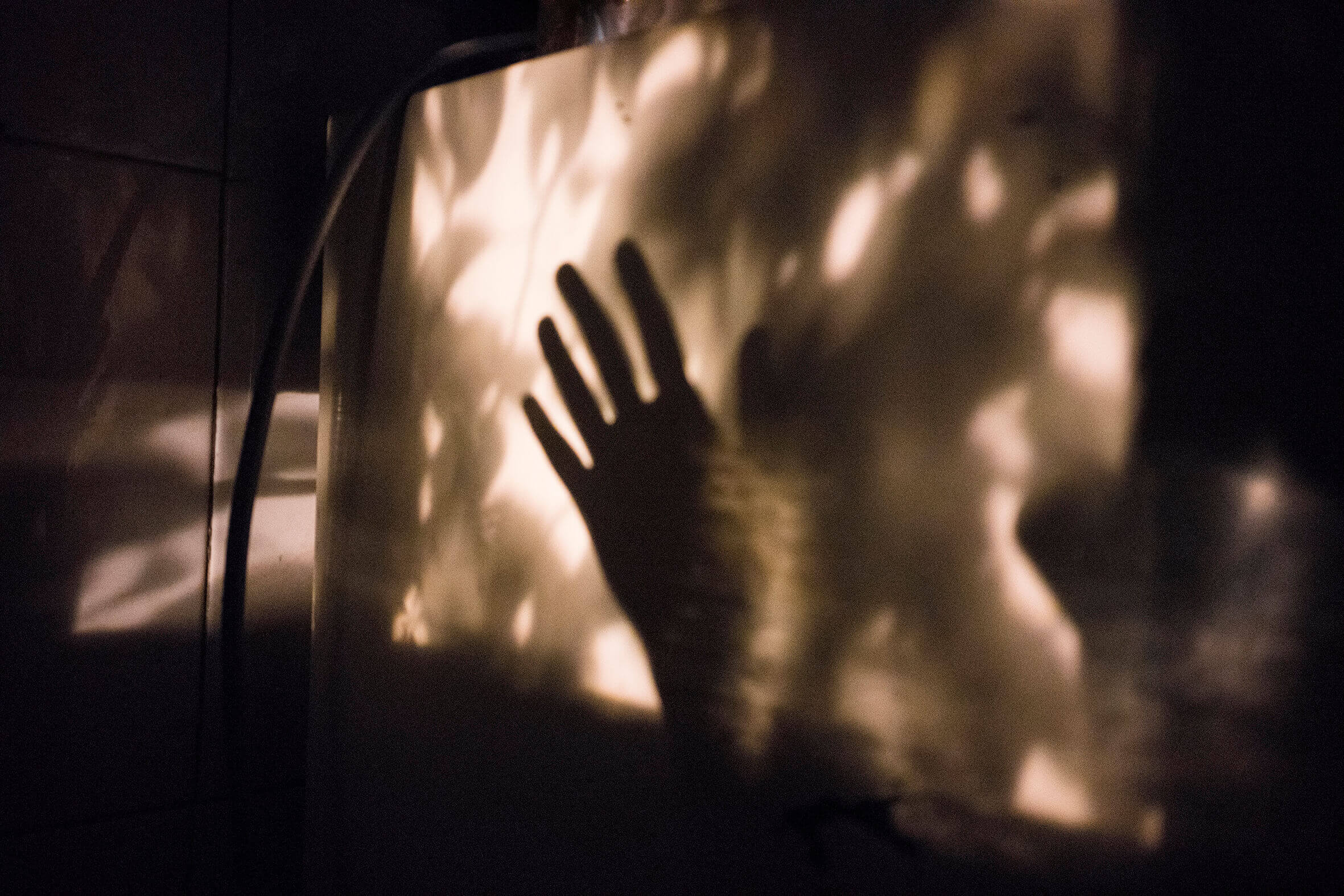