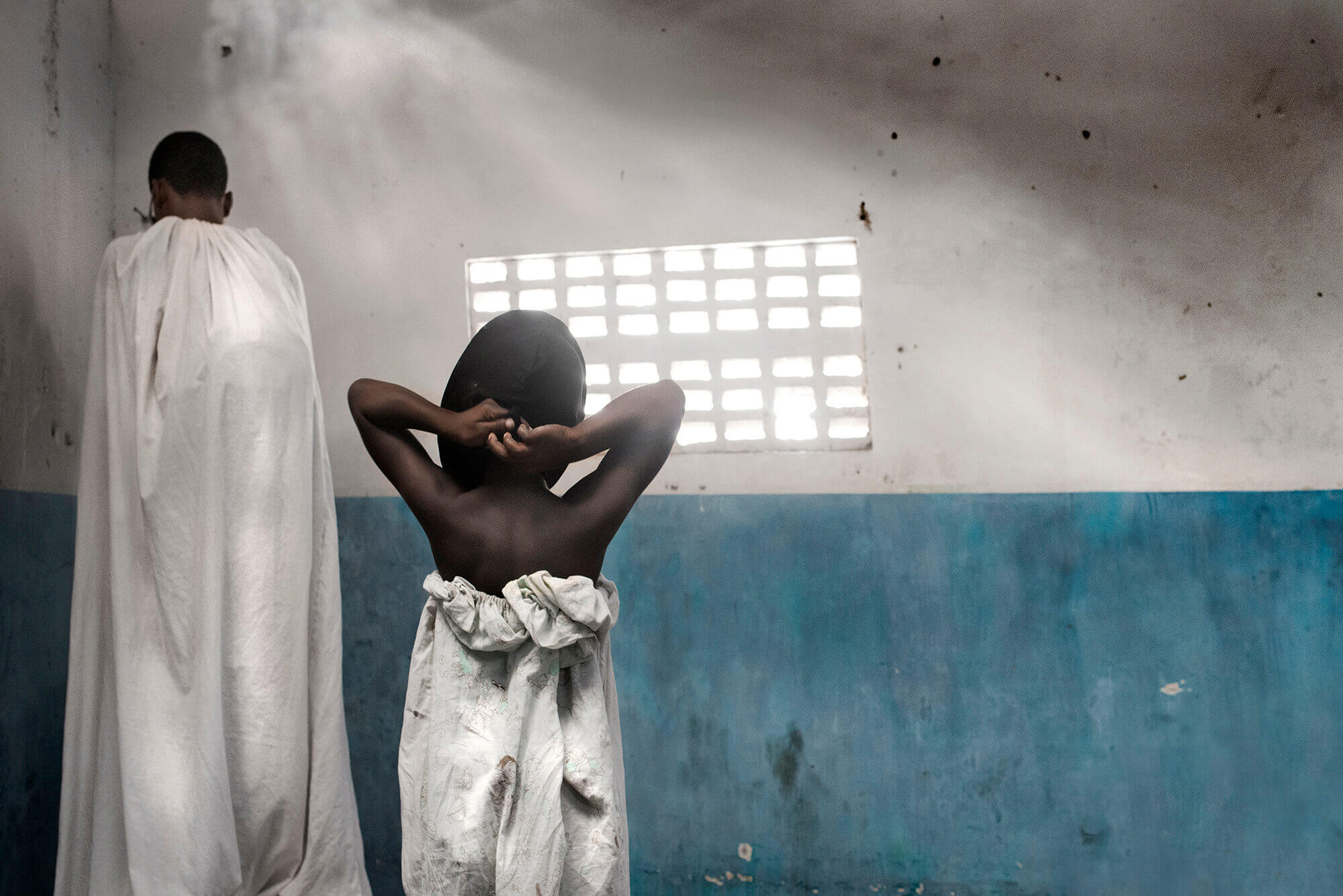 In the late afternoons of the weeks before Lent, children dress in giant bed sheets and run all over town to drive away evil spirits.

“Isolated Soul” evokes a deep emotional state of nostalgia and profound melancholy, known as “saudade.” The term translates as the longing for something that is absent, or someone who one loves. The word was invented by the four million African peoplewho were captured and forced into slavery, the very same who today shape the Afro-Brazilian community. This constant feeling of saudade is actually a poetic way to describe missing one’s homeland. It is the very same engine that kept their people alive for so many centuries, during sadness and torture. The feeling was so strong, it marked the identity of a complete generation. It has been transmitted almost as if it were genetic, generation after generation, into the present day.

‍
During the era of the Atlantic slave trade, in the year 1800, Brazil imported more African slaves than any other country in the world. By comparison, the United States received about 3.5% of the total number of slaves brought from West Africa. In Brazil, the slaves who escaped built communities called Quilombos, some of which exist even today. Most of them retain cultural elements of the African homeland of their residents.  These communities are among the poorest in Brazil. Some people have had difficulty securing legal titles to land that they and their enslaved African ancestors traditionally inhabited, due to powerful agricultural business and government interests.

‍
Though slavery in Brazil has been abolished since 1888, their descendants kept their spiritual traditions alive in their segregation, tying communities together with the unique bond of shared memory. The slaves worshiped their African ancestors in ceremonies that were violently persecuted by the evangelizing Portuguese, who considered it black magic. Portuguese missionaries believed that if they converted enslaved Africans into Christianity, they would be more submissive. As a consequence, much of the religion practiced by these former slaves survived, through its practice in secret and the adaptation of ancestral African religions with Christianity.The conversion was only superficial, and they managed to keep their religion alive. 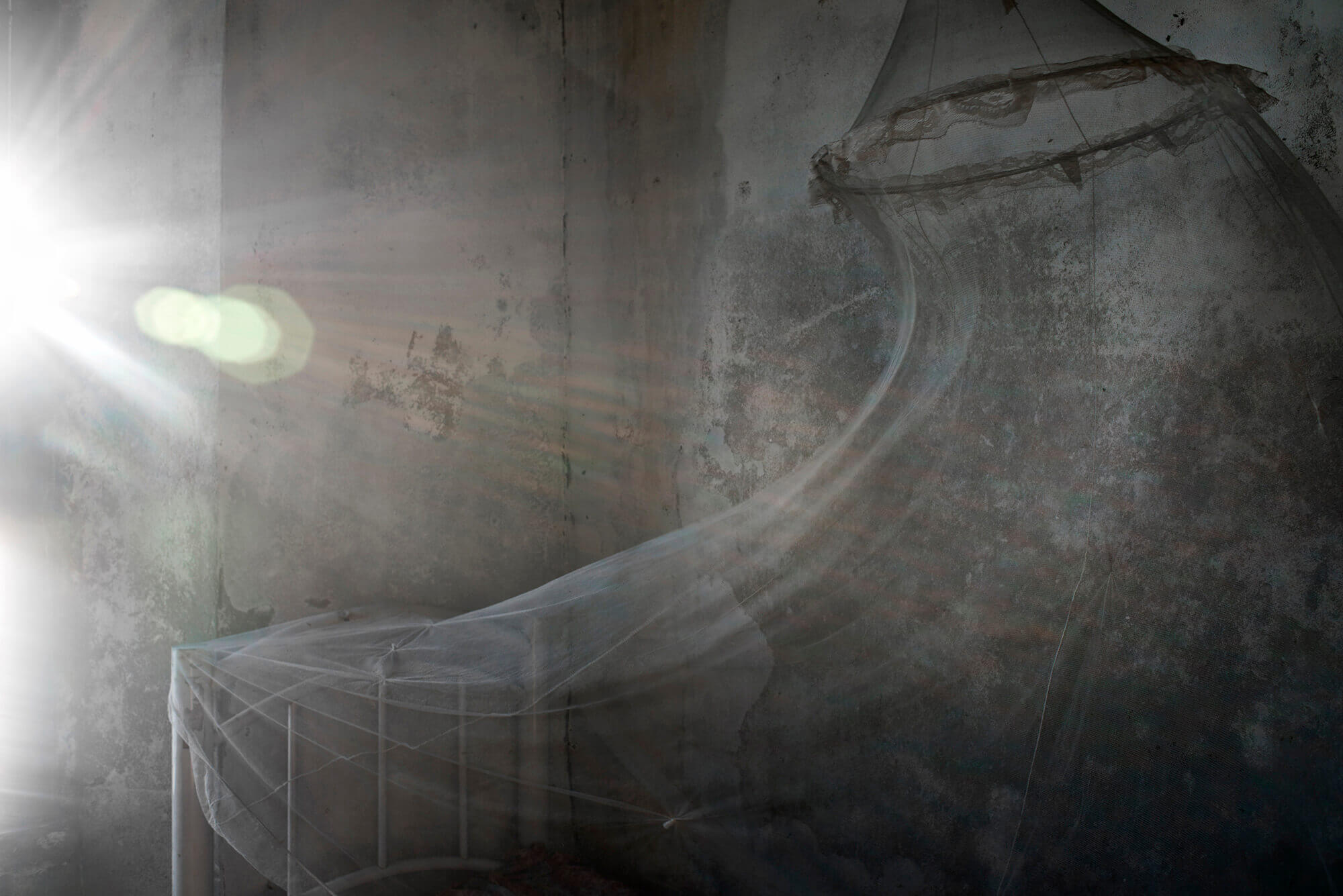 A mosquito net dances in the wind with the last sunbeams of the day. Families living in this “quilombo” do not legally own the land they and their enslaved African ancestors have traditionally inhabited. 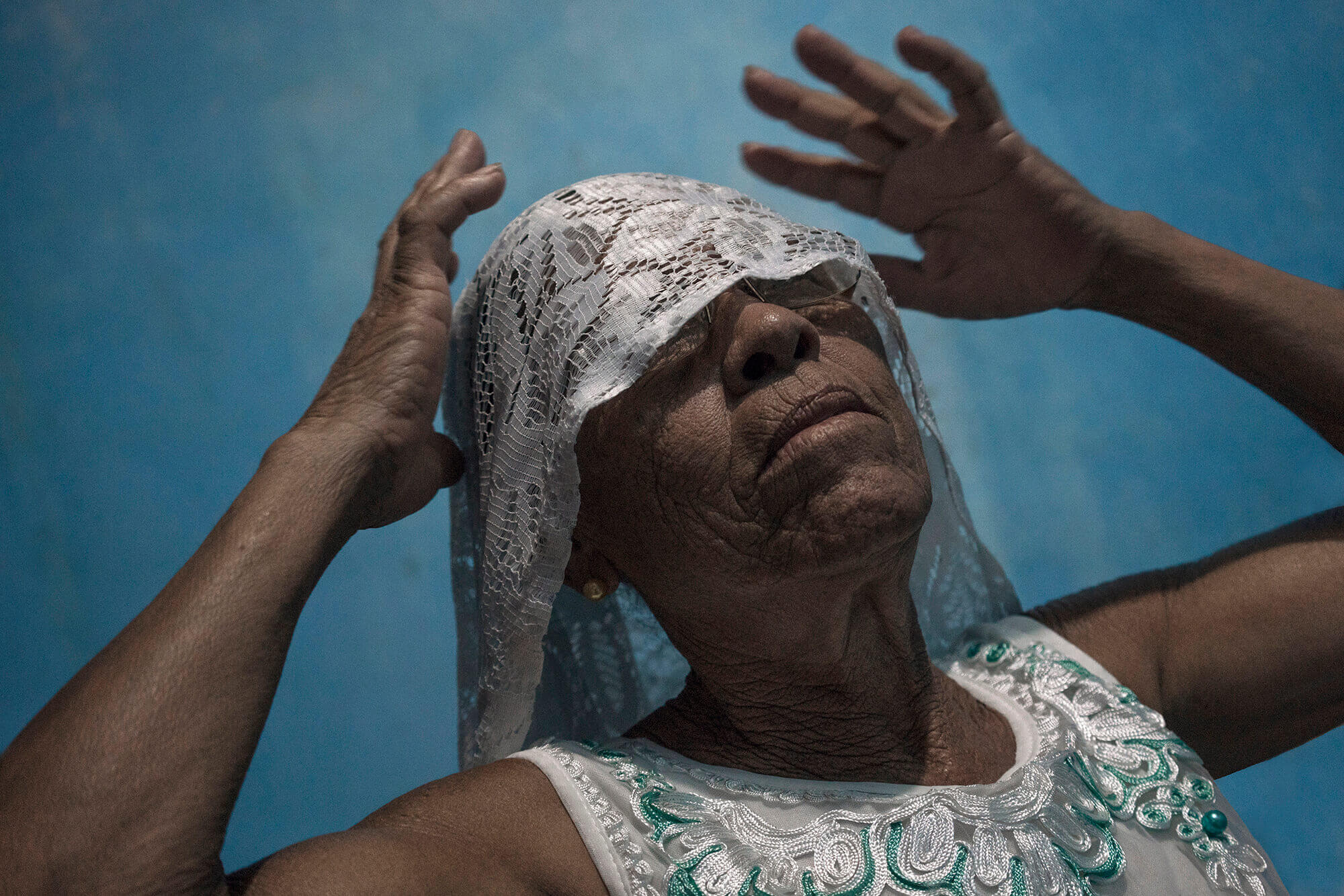 A woman performs a religious celebration called Candomblé. It is a syncretic, Afro-Brazilian religion that blends African traditions with Catholicism, spiritualism, and Indigenous beliefs. 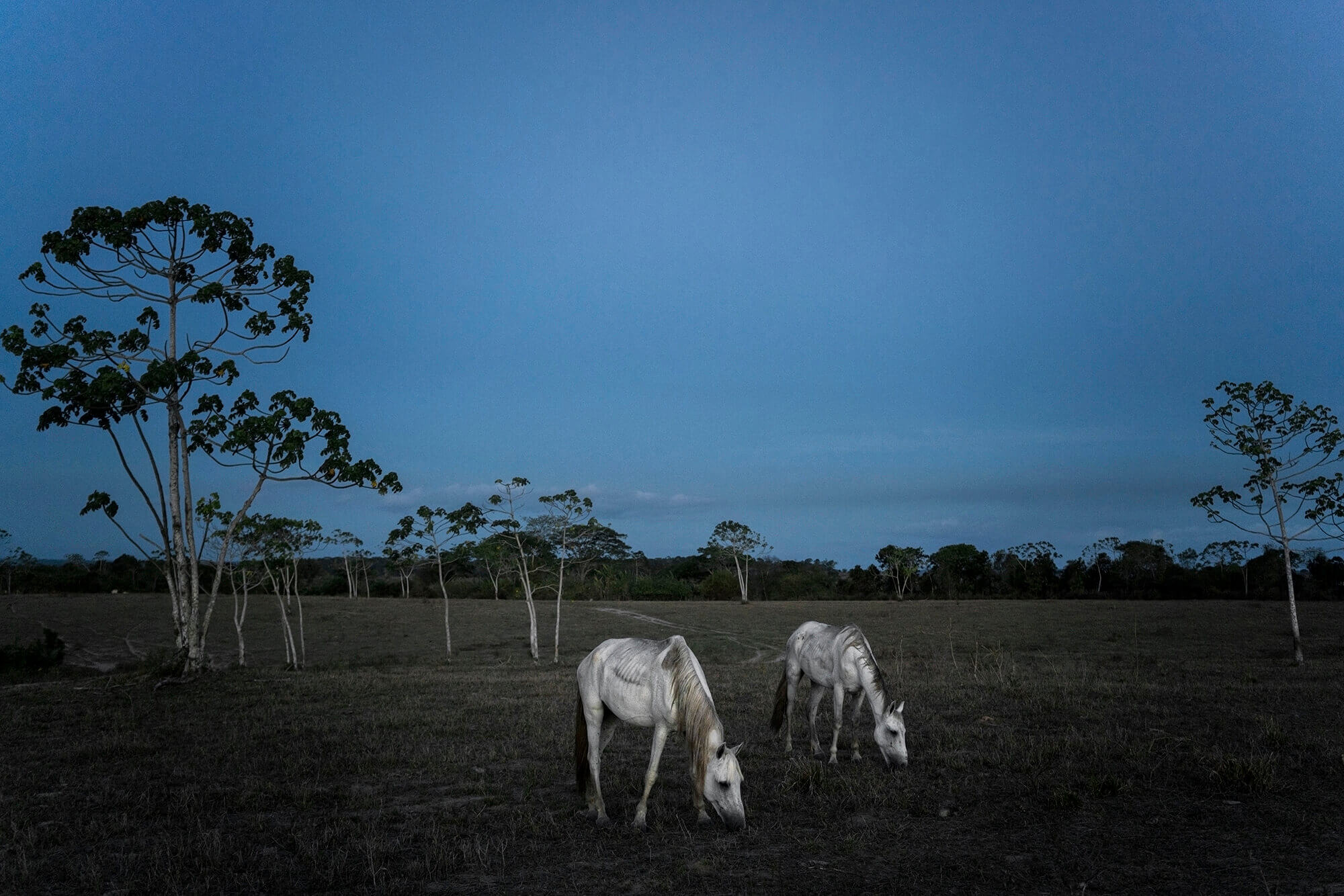 Horses graze in a rural area known as a “quilombo” a hinterland settlement founded by people of African origin. Nowadays most inhabitants of the “quilombos” are the descendants of escaped slaves. 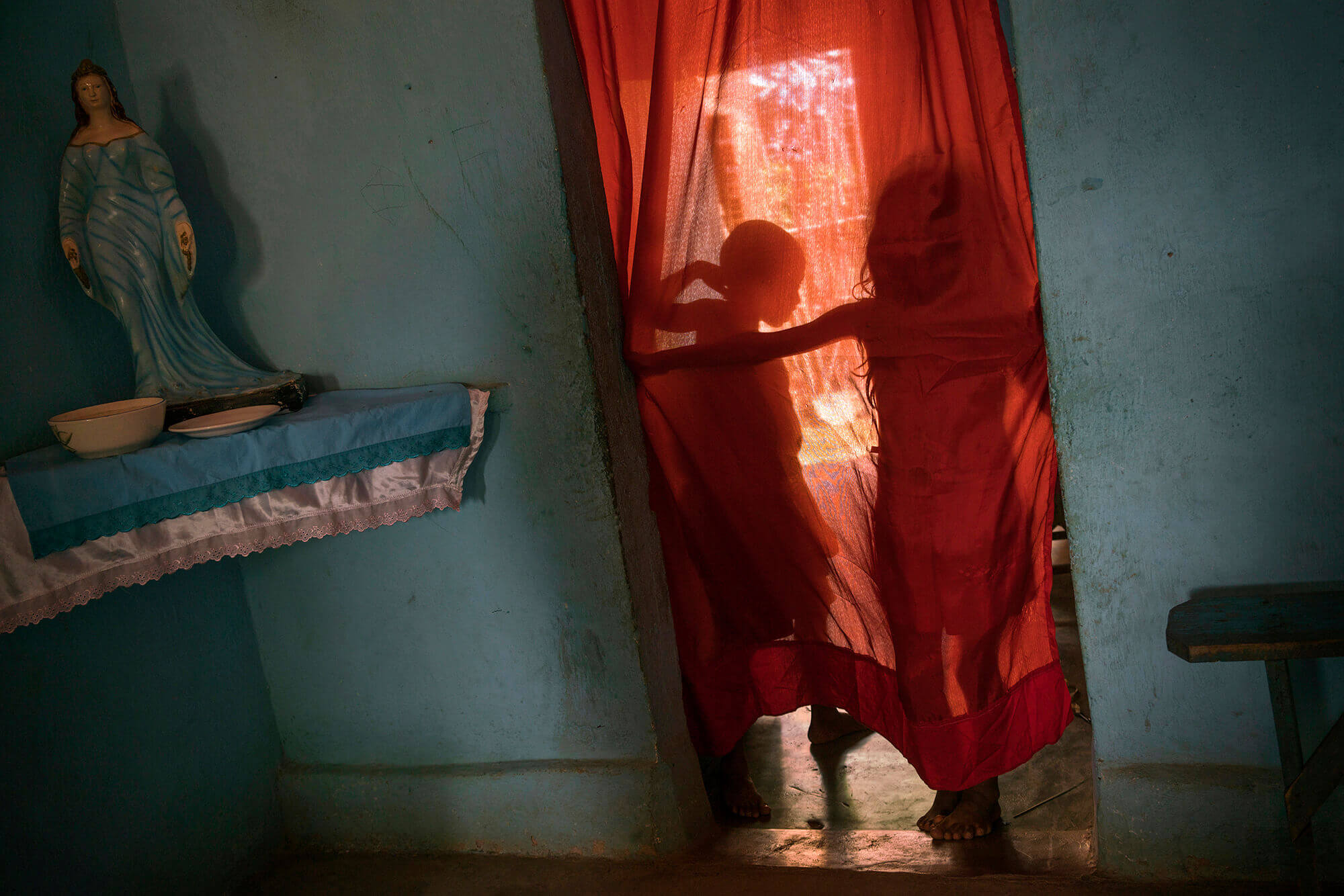 Siblings play at home next to a sculpture of Yemayá, the female water deity from the Candomblé religion. Yemanyá is often replaced with the Virgin Mary of the Catholic Church, due to the synthesis of beliefs that emerged during the slave trade era. Candomblé is a religion based on African beliefs, which is particularly popular in Brazil. 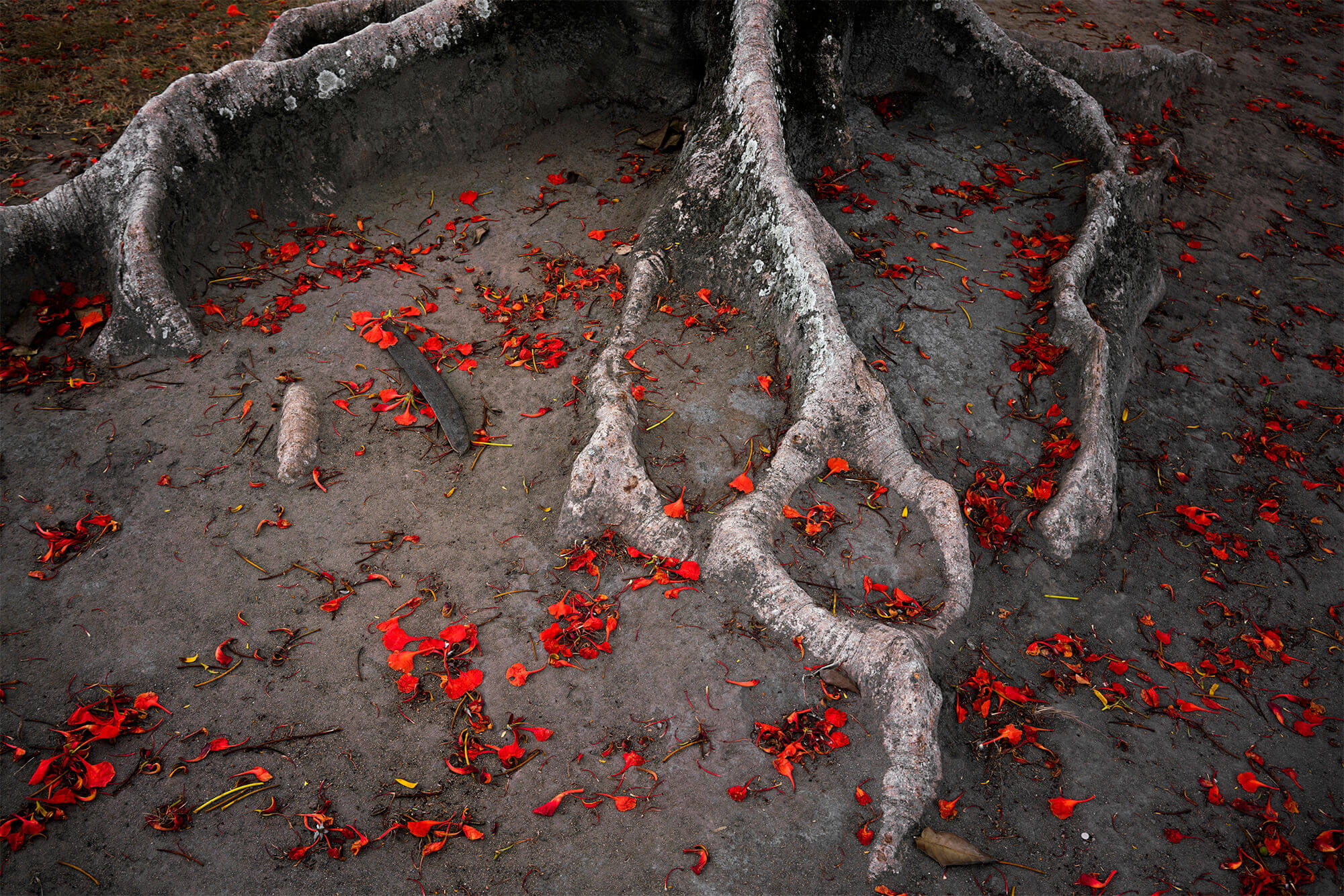 Red petals lie on the floor next to the roots of a Flame Tree, also known as flamboyant, which is widely regarded as one of the most beautiful tropical trees in the world. 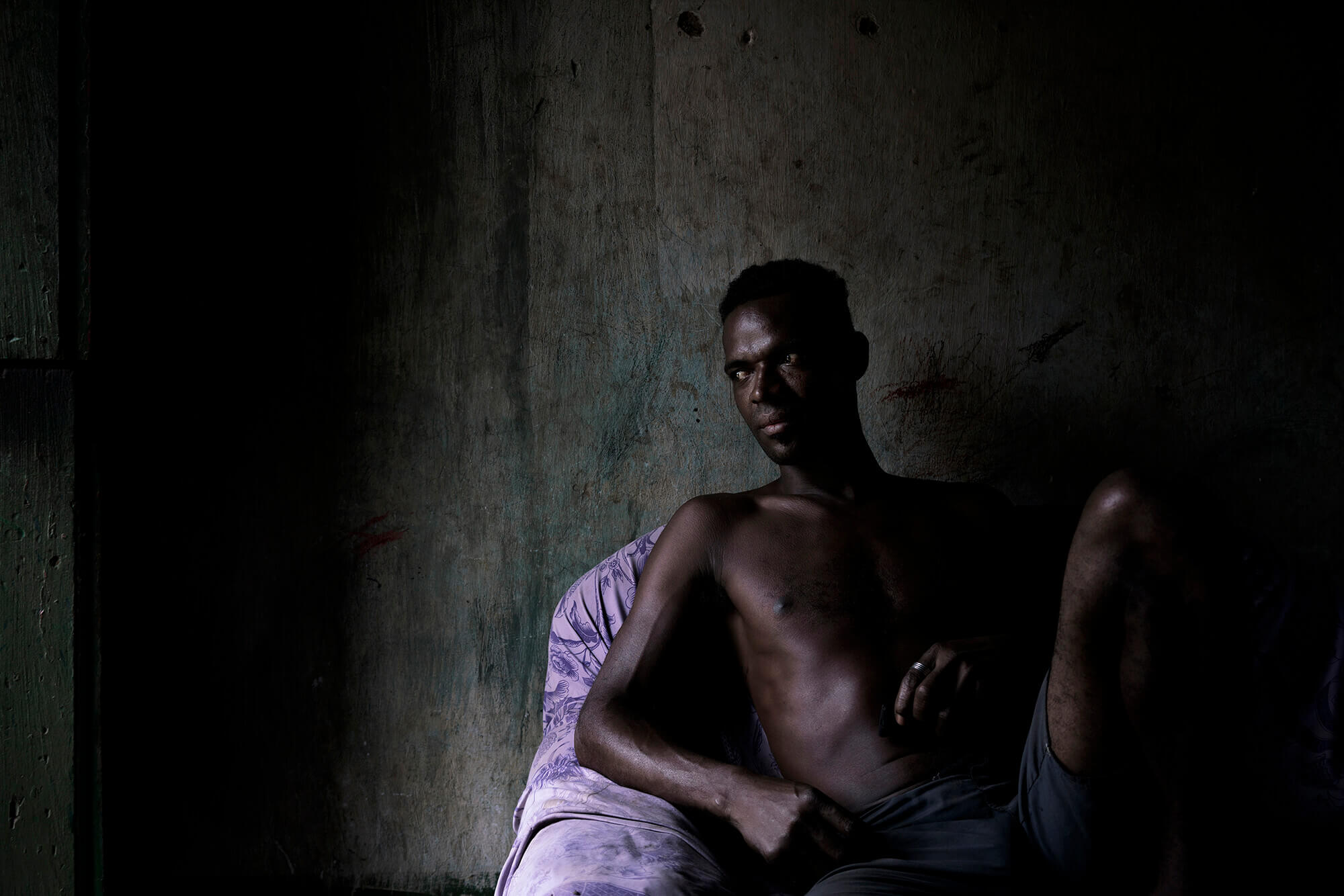 Valdimar is a young man who lives in an impoverished “quilombo”. His ancestors were one of the many captured Africans who were forced into slavery, and later founded this community. 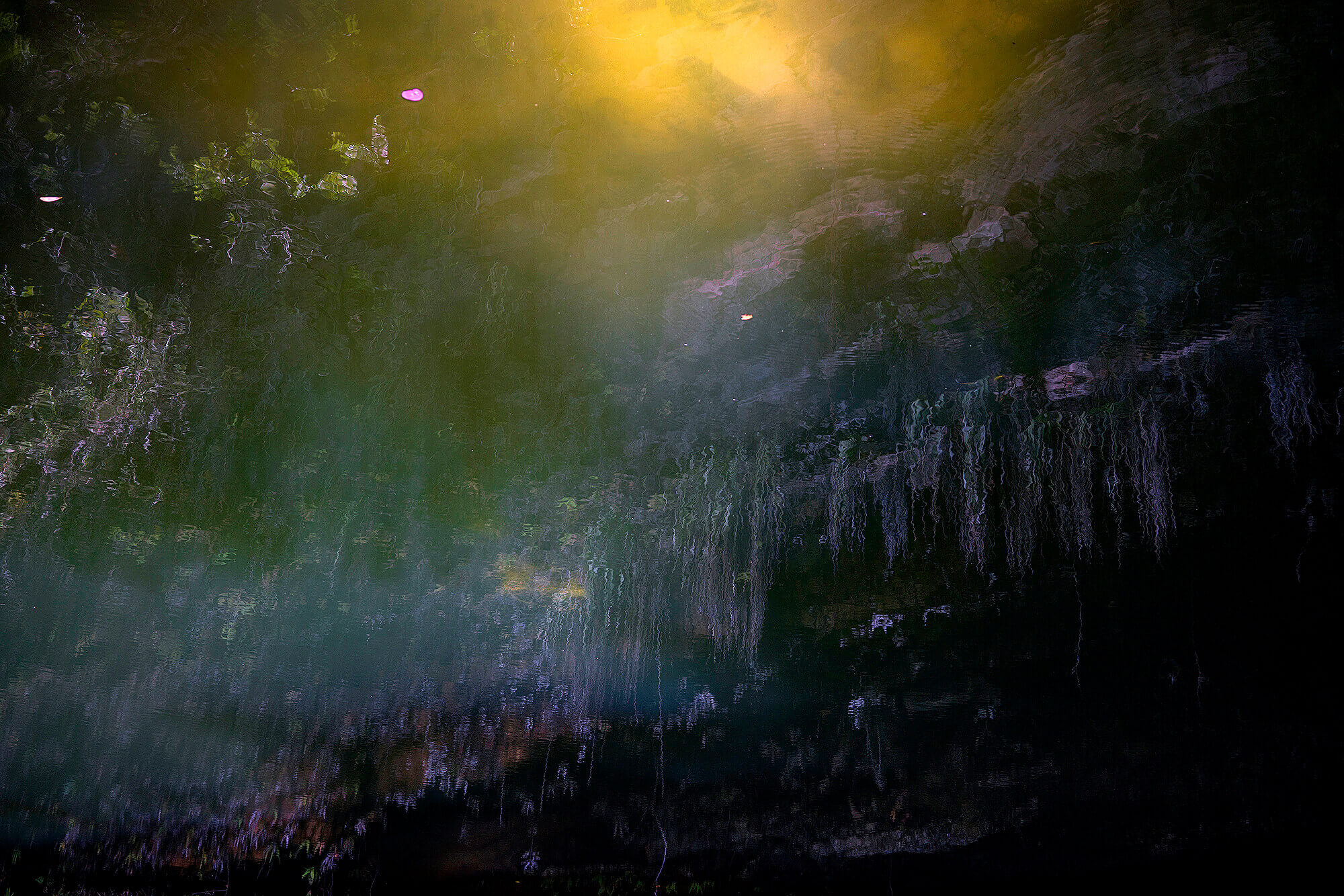 A watering hole reflects the cave entrance of an old mine, where hundreds of African slaves died mining for gold. 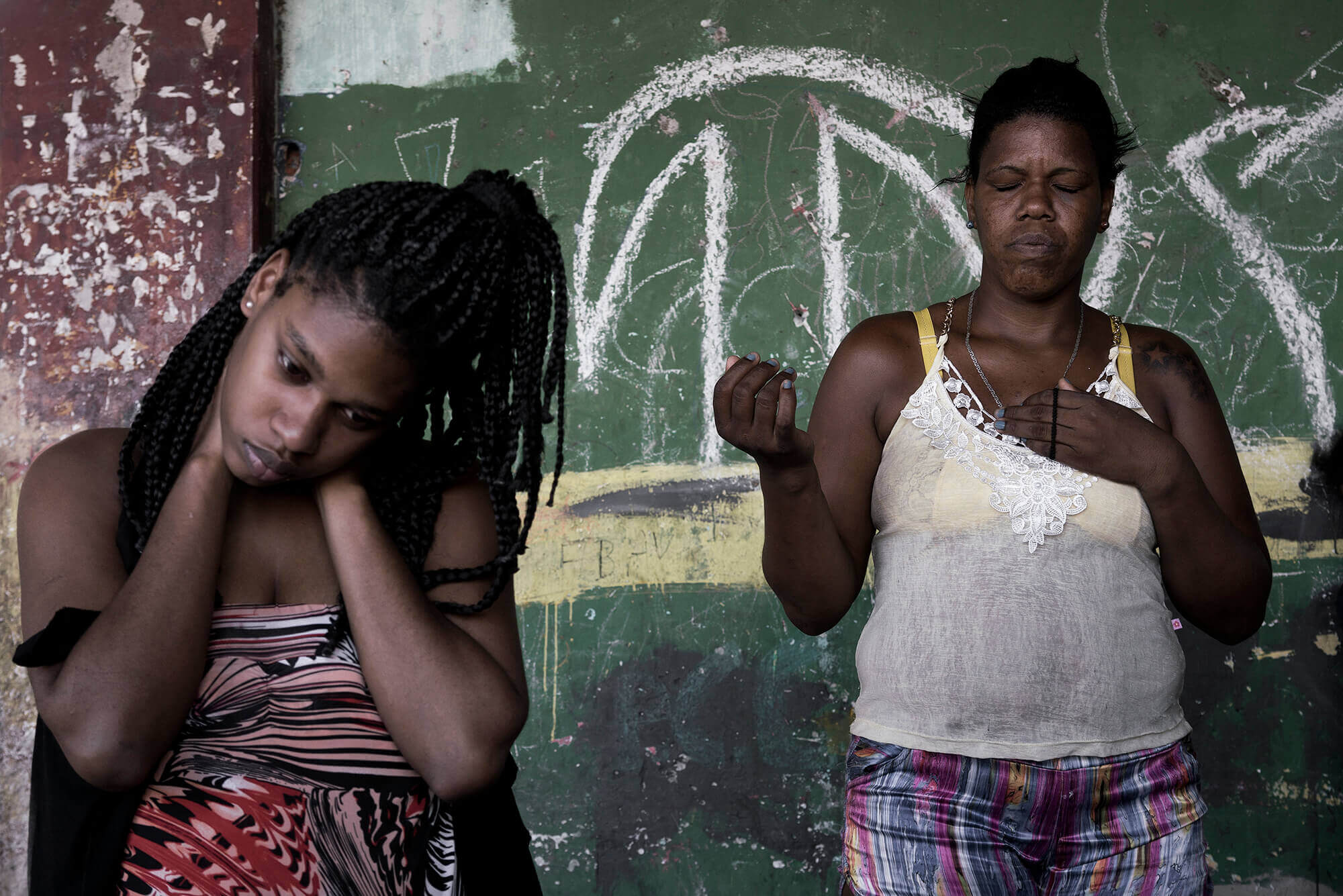 Two women pray during a daily mass offered by a non-profit organization. They live in an abandoned building belonging to Salvador's “Movimento dos Sem-Teto” or Roofless Movement. 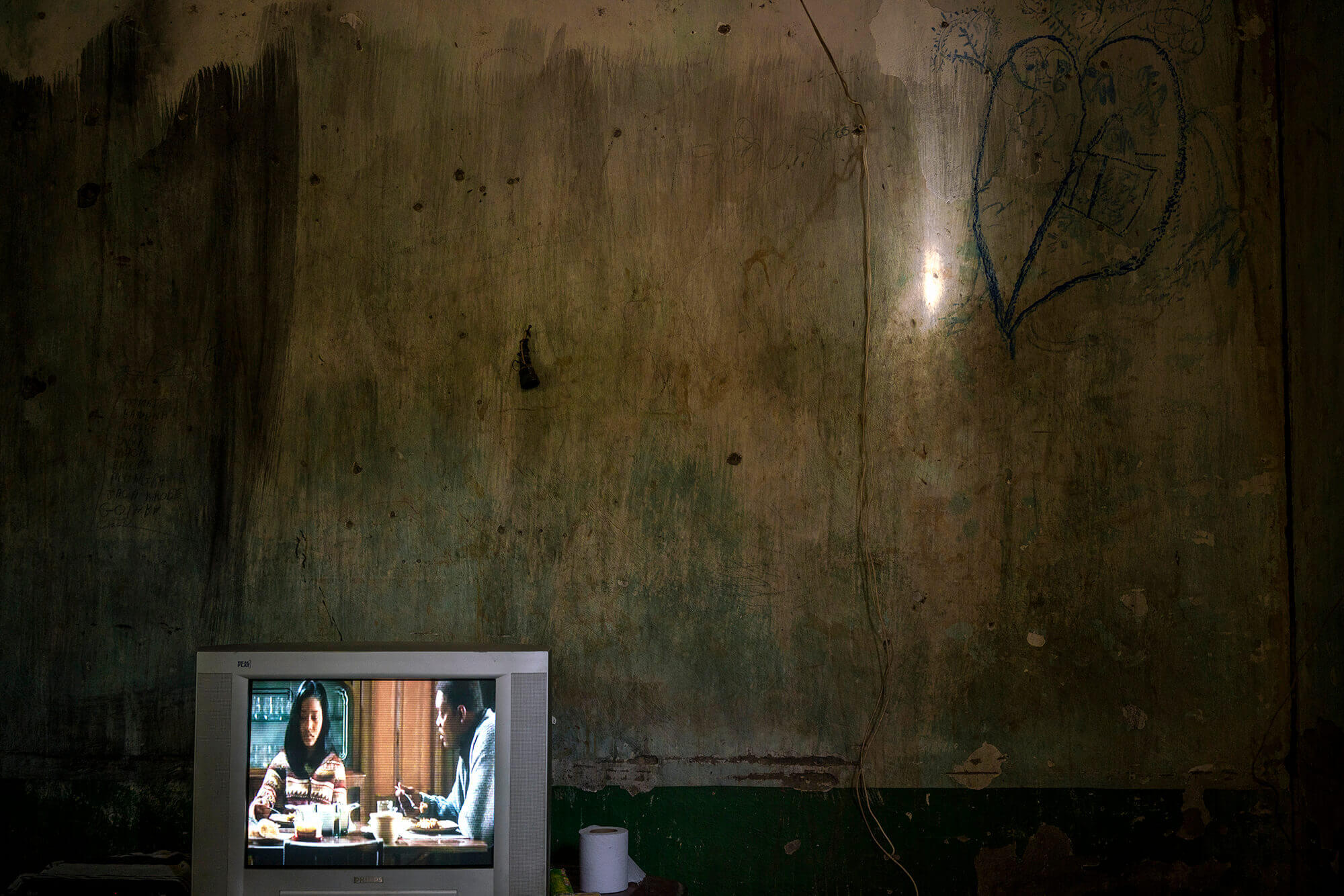 A family living in an impoverished Quilombo watches a TV show. Most of these communities have had difficulty securing legal titles to the land that they and their enslaved African ancestors traditionally inhabited. 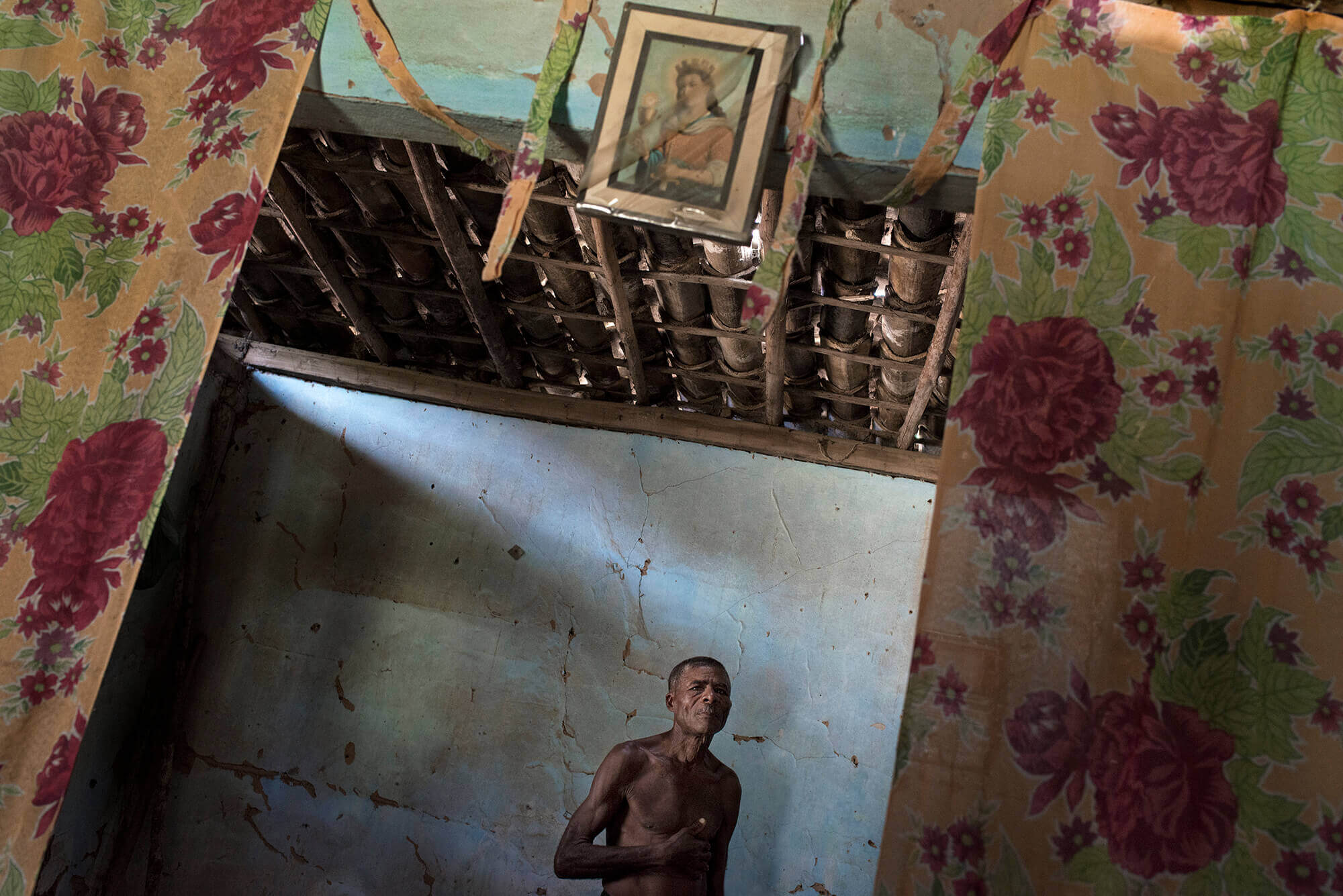 A par of the afro-Brazilian community believe in Christian saints, due to the synthesis of religions that emerged during the trans-Atlantic slave trade. 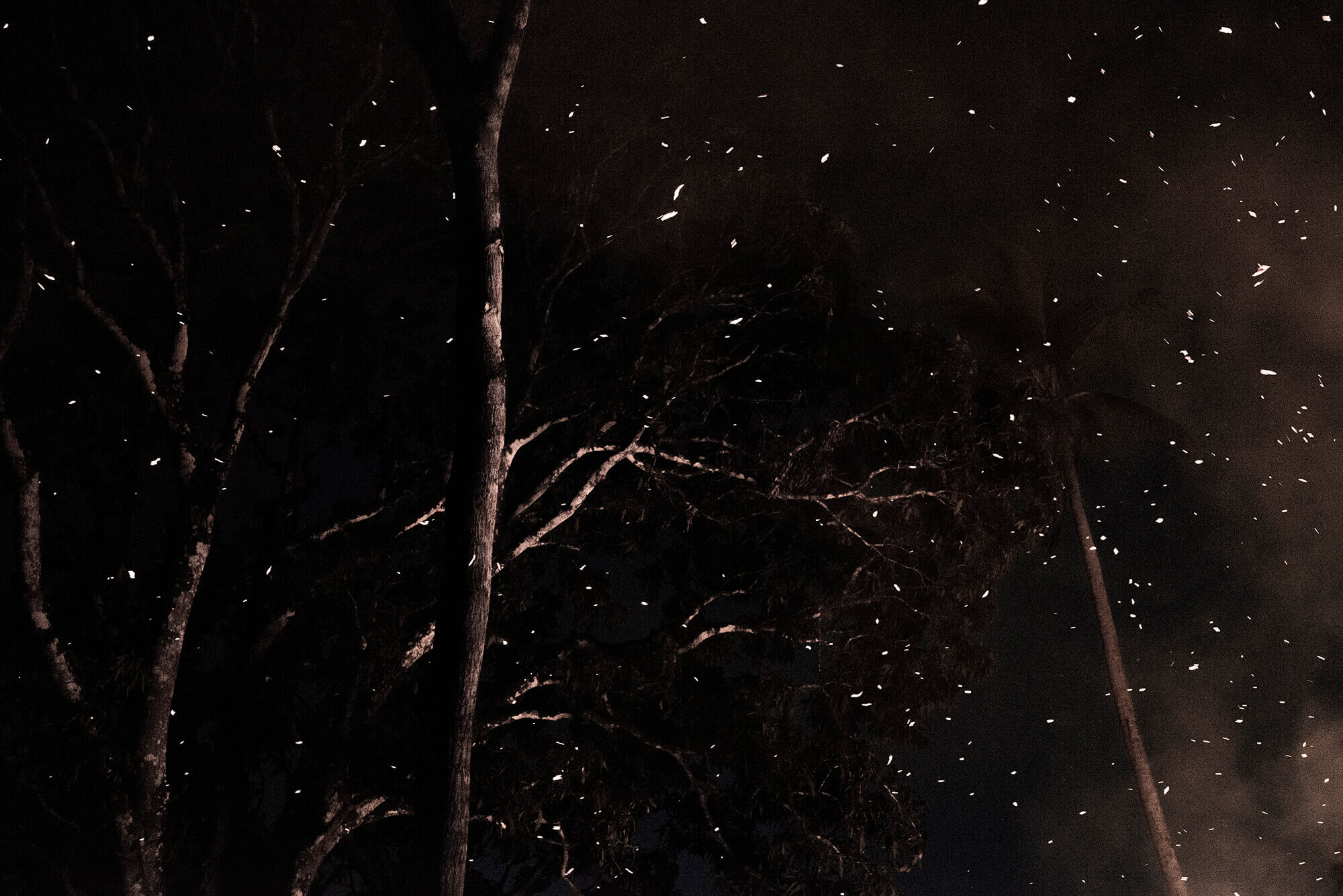 Burning sparks fly through the night air during a controlled burn on an abandoned field, set by locals to keep away poisonous snakes. 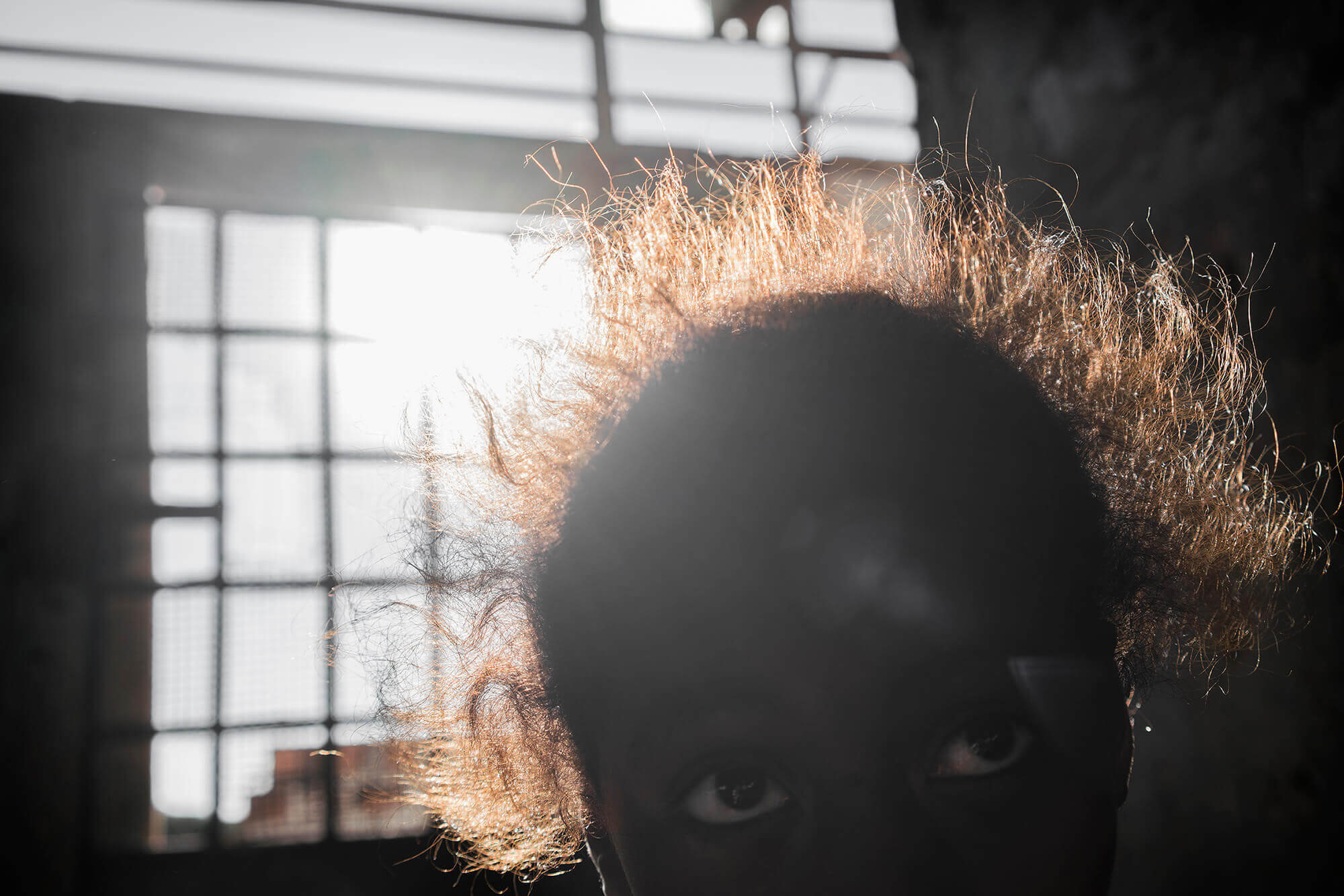 A girl plays alone in an abandoned building, home to more than 20 Afro-Brazilian families living in precarious conditions. 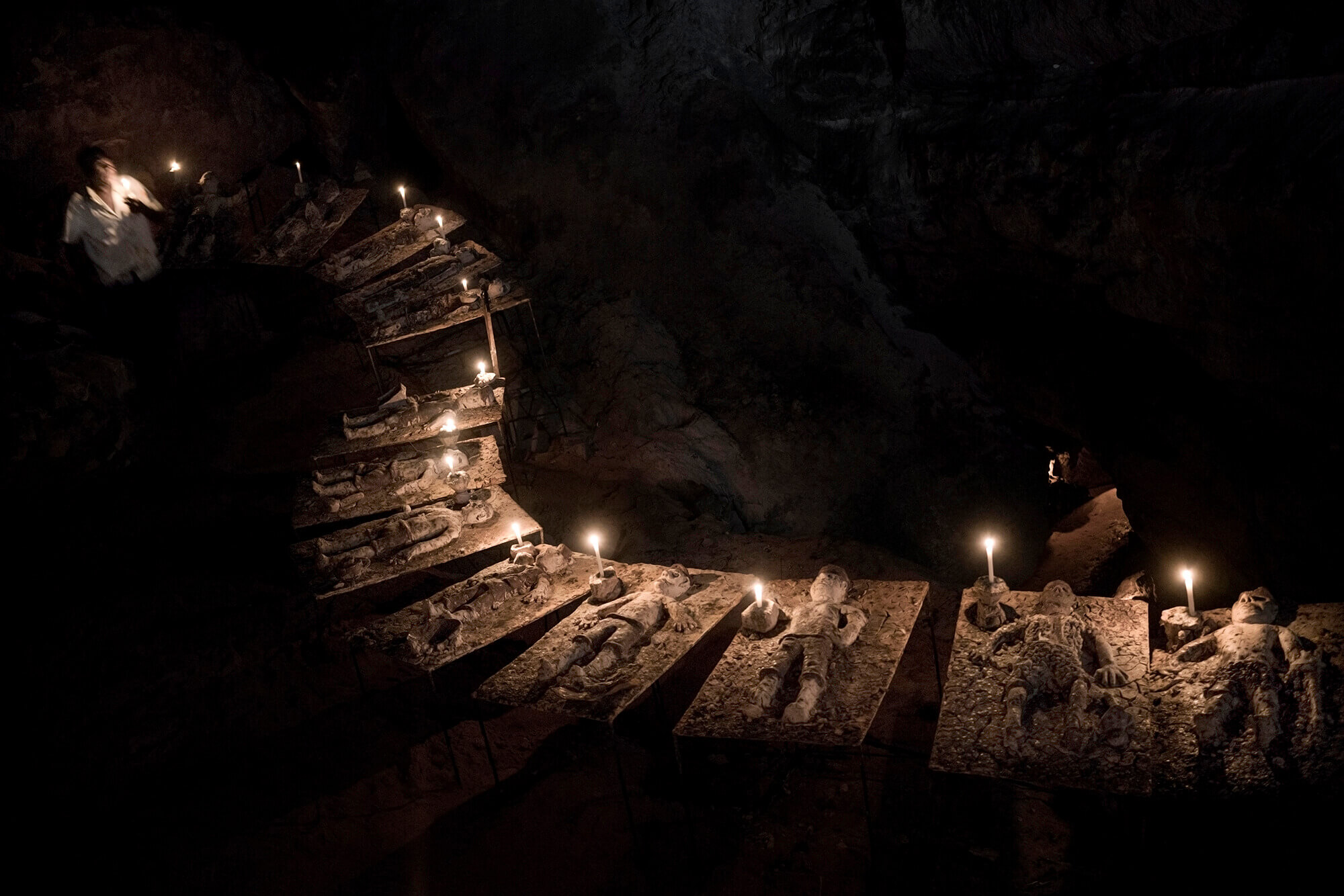 Lying on the cave floor of a former gold mine, dozens of sculptures are kept in memory of hundreds of African slaves who died there, mining for gold during the slave trade era. 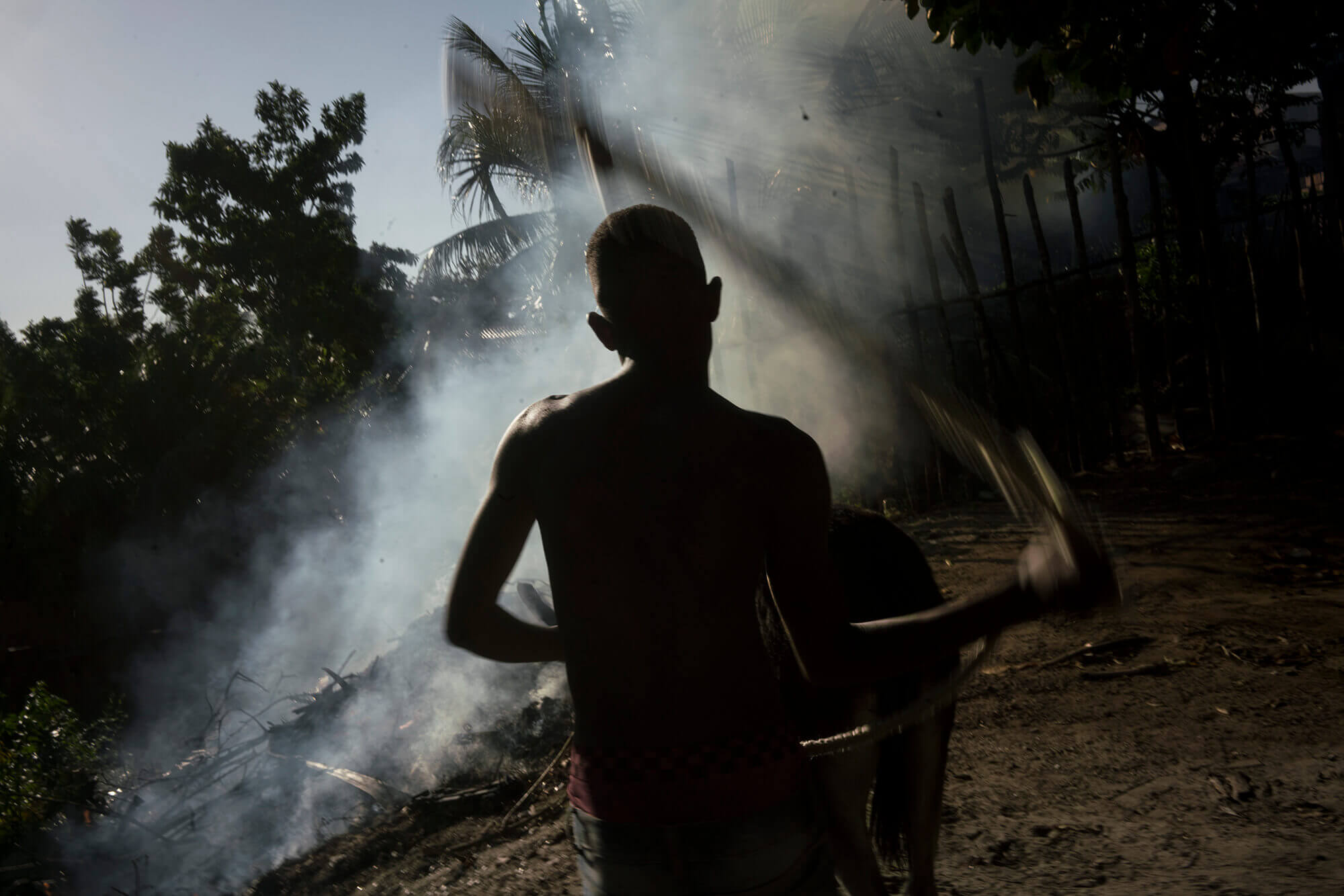 A young man whips a donkey during a controlled burn in a field. 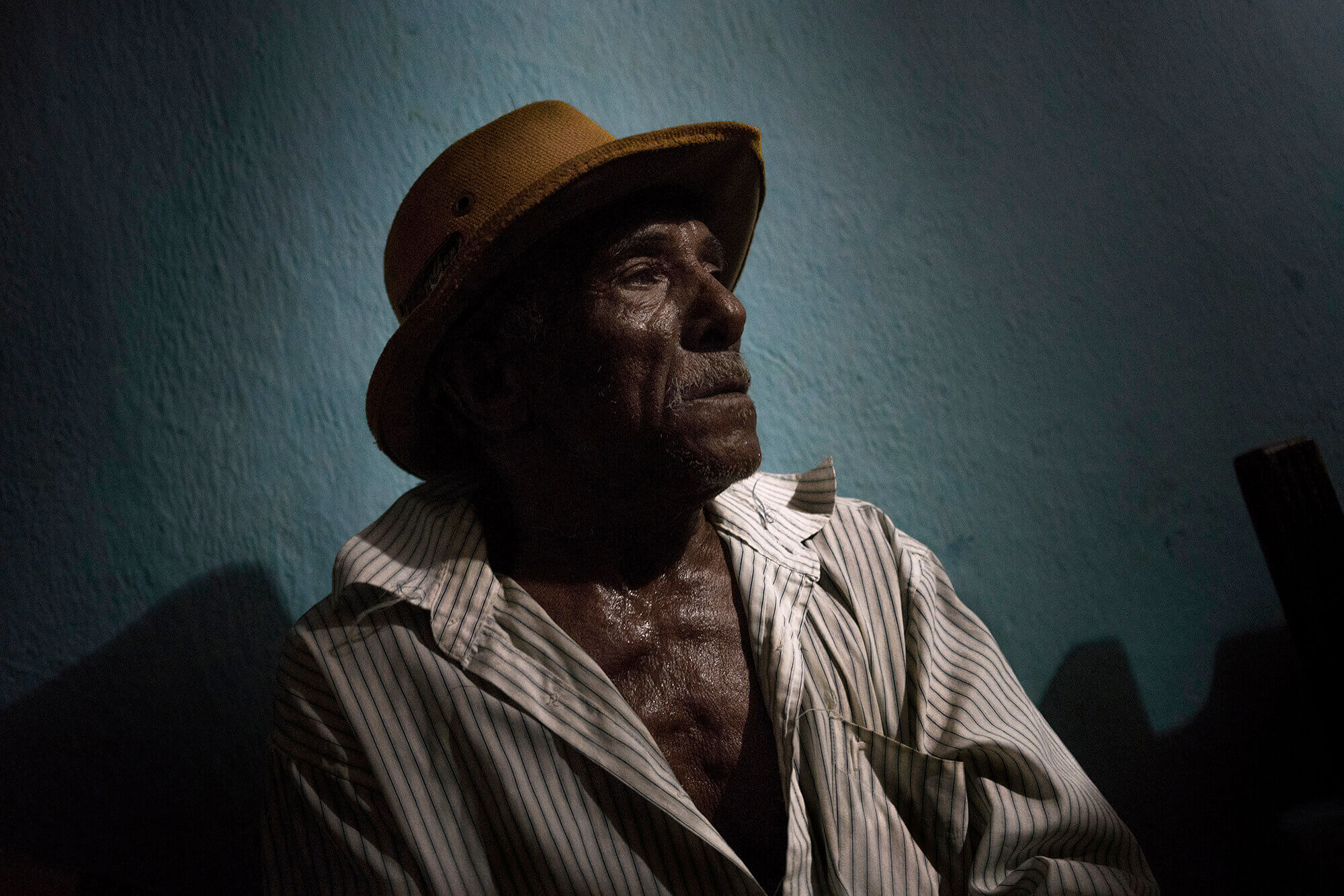 A man attends a Candomblé ceremony, stemming from an-Afro Brazilian religious tradition that originated among enslaved Africans. The people who were brought from West Africa to Brazil during the slave trade continued to teach their mythology, culture, and language on to future generations. 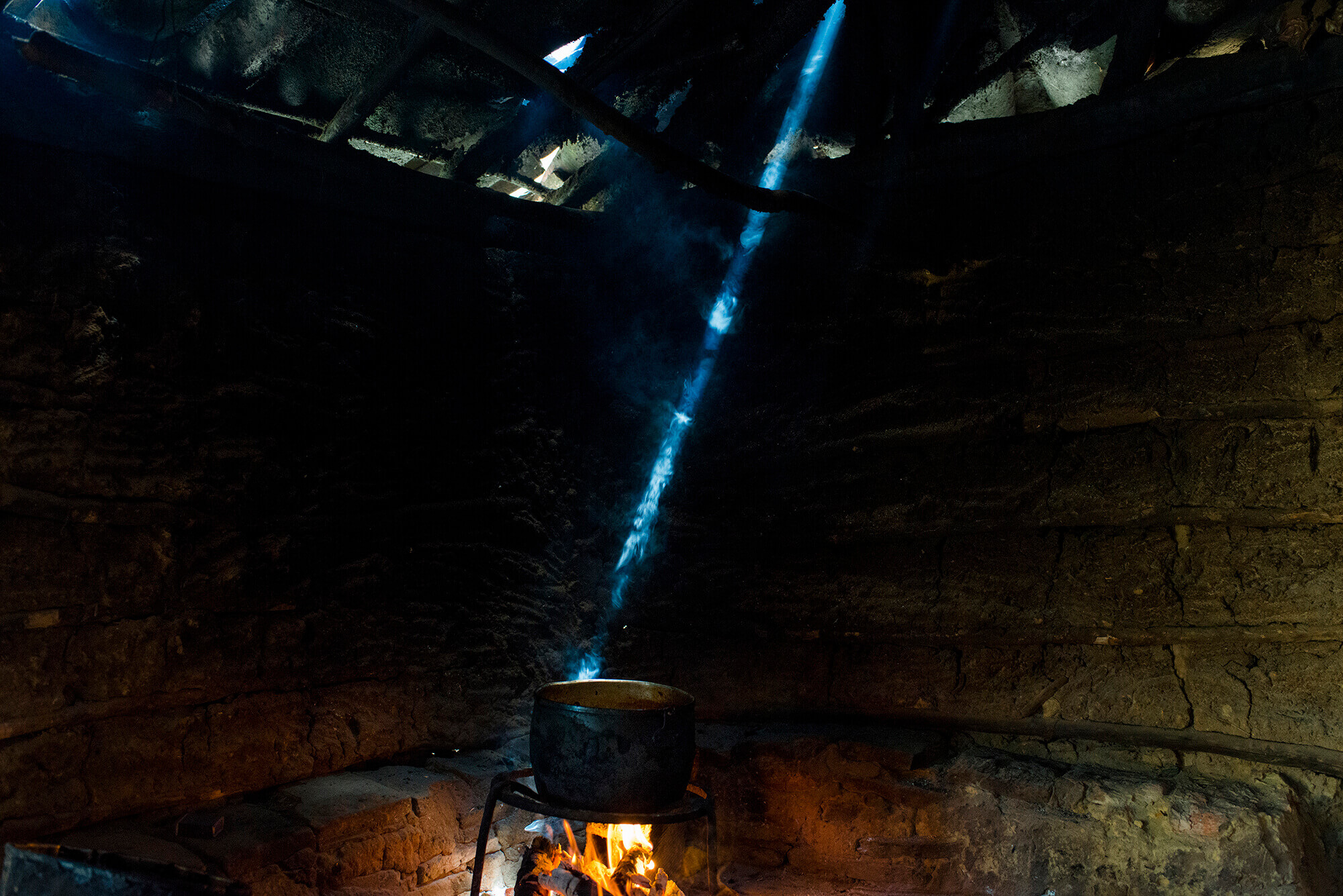 A meal is cooked in a traditional way by a family who lives in a Quilombo; a community built by escaped slaves during the era of the slave trade. 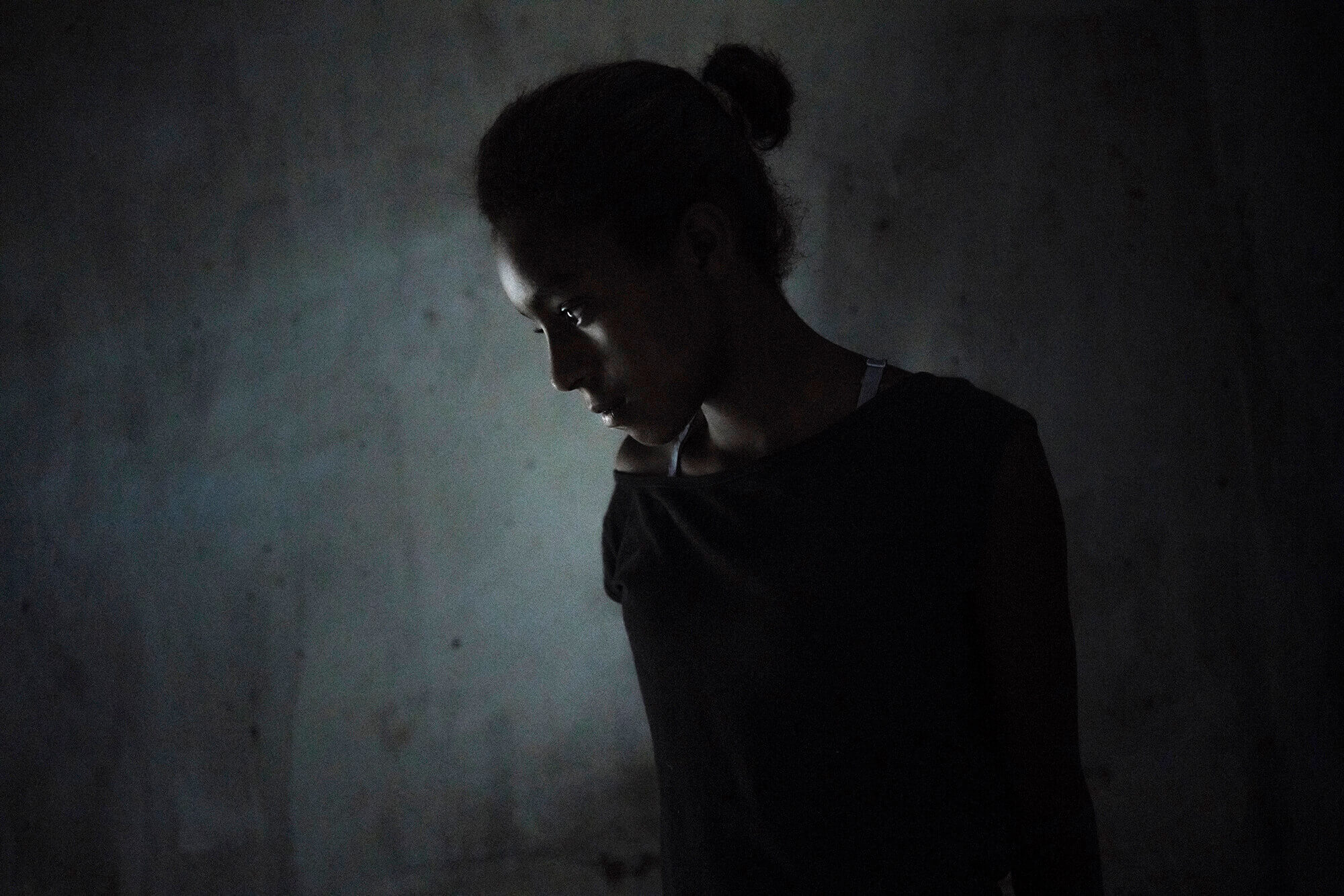 Mariana stands quietly inside an abandoned house that will soon be repaired and inhabited by her family. She currently lives in an impoverished Quilombo in a rural area. 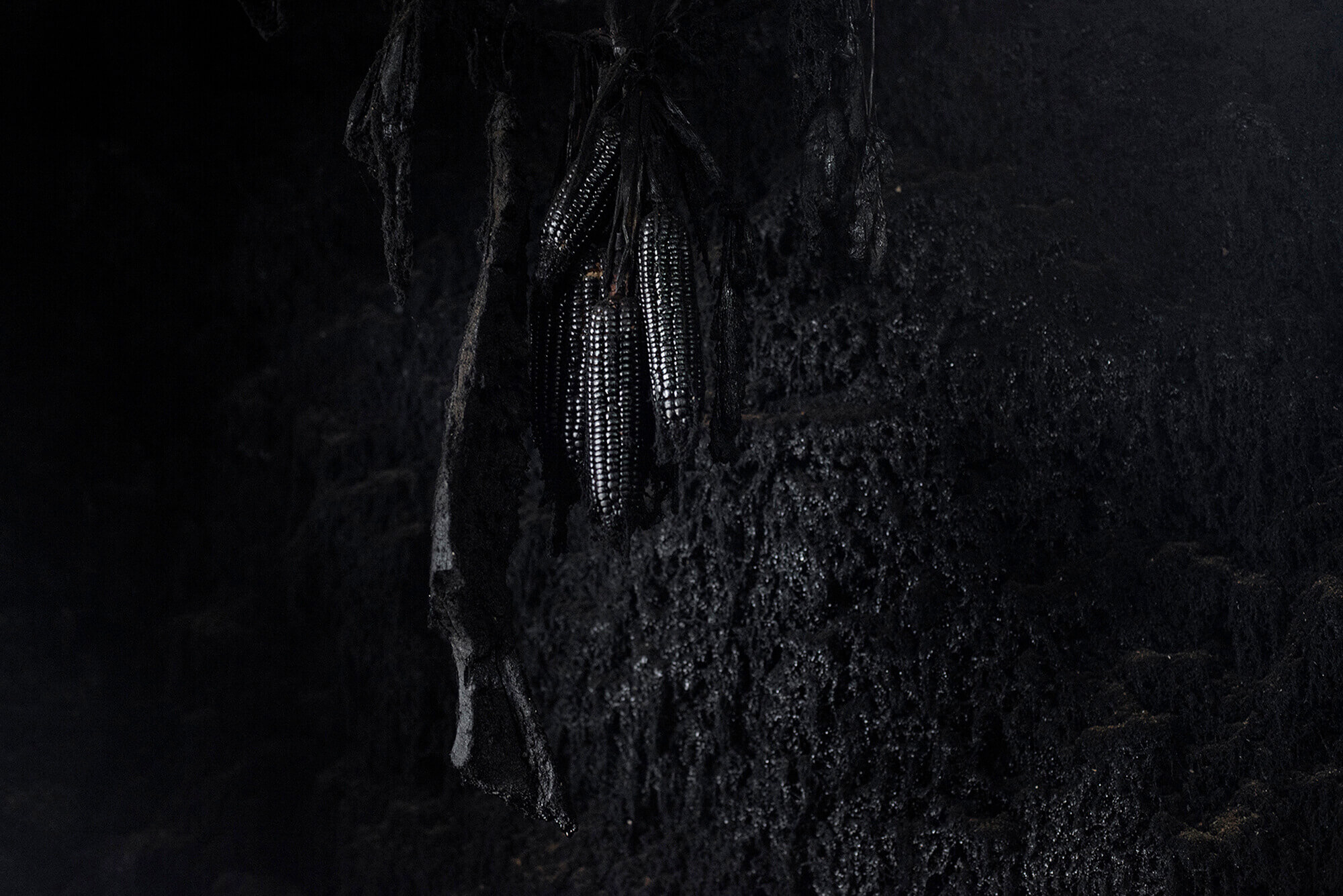 Dry corn hangs on the wall of a kitchen. Due to cooking oil and the dark smoke of the fire, a big part of the house is getting black and sticky. 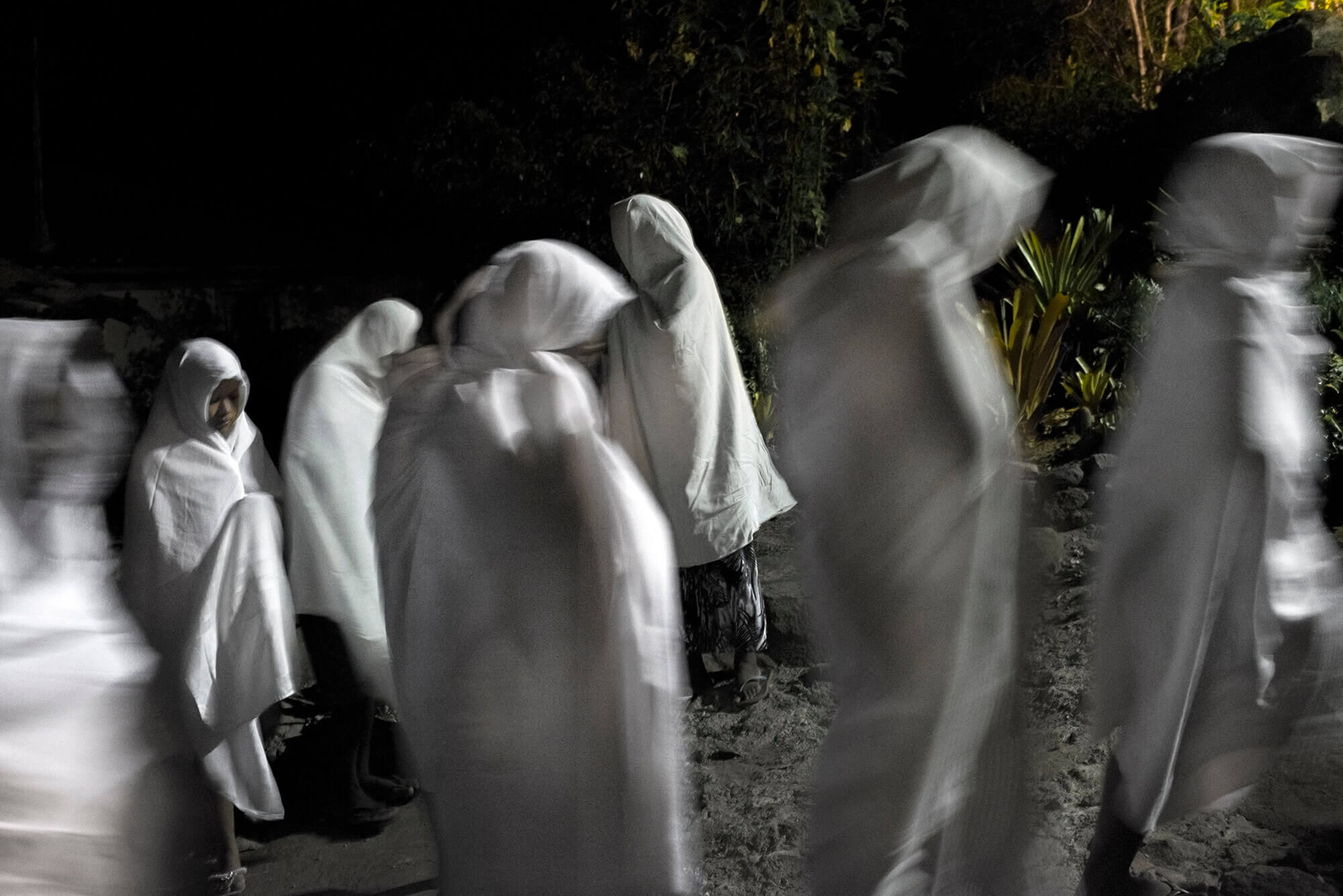 A group of women dress with long white sheets and wander through town, honoring those no longer with us during a ceremony known as “Ternos das Almas,” the Group of Souls. 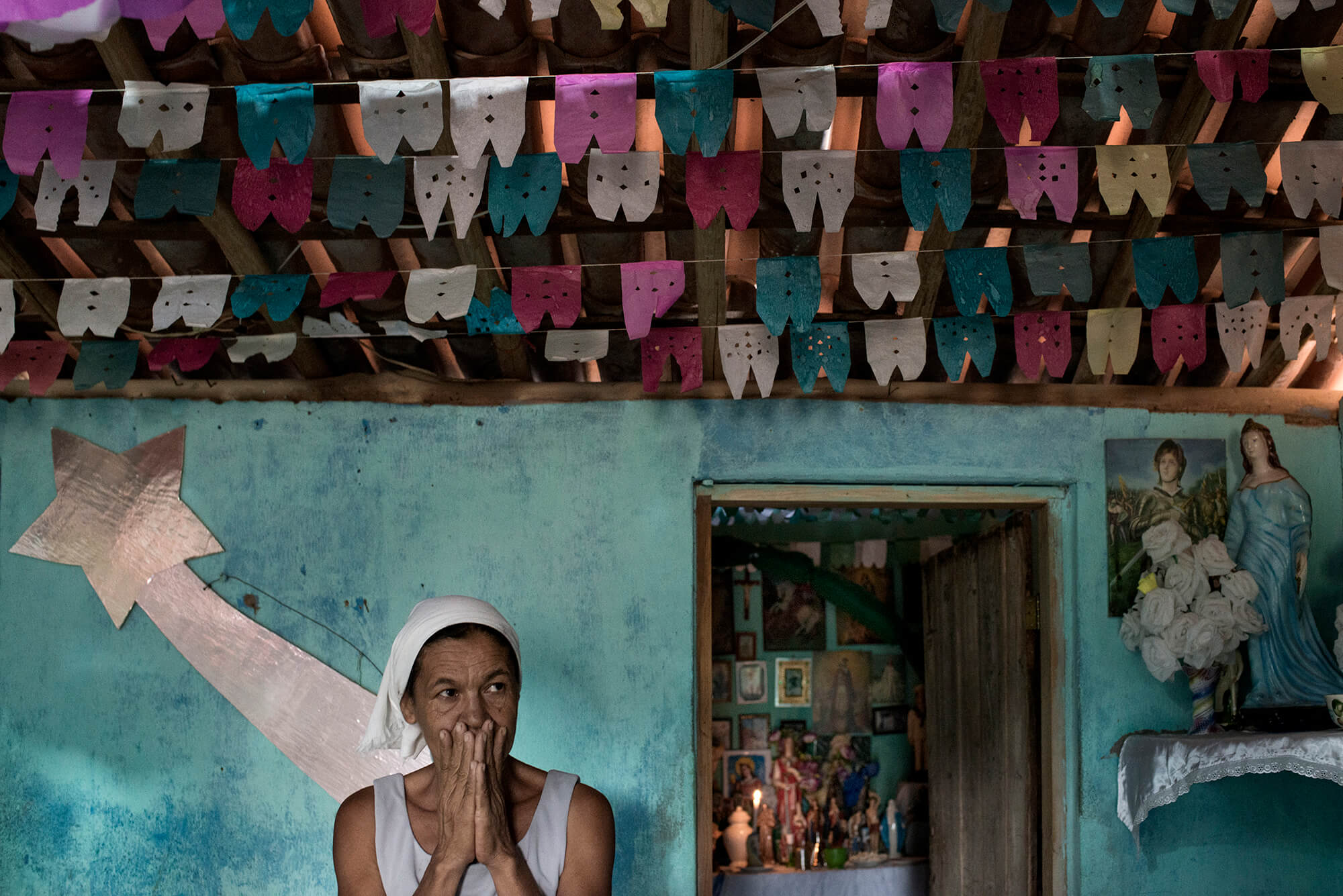 Maria Carmozina is the matriarch of her family and the priest of this “terreiro,” a religious house where rituals and dances are dedicated to Yemanjá, the water goddess of the Afro- Brazilian Candomblé religion.