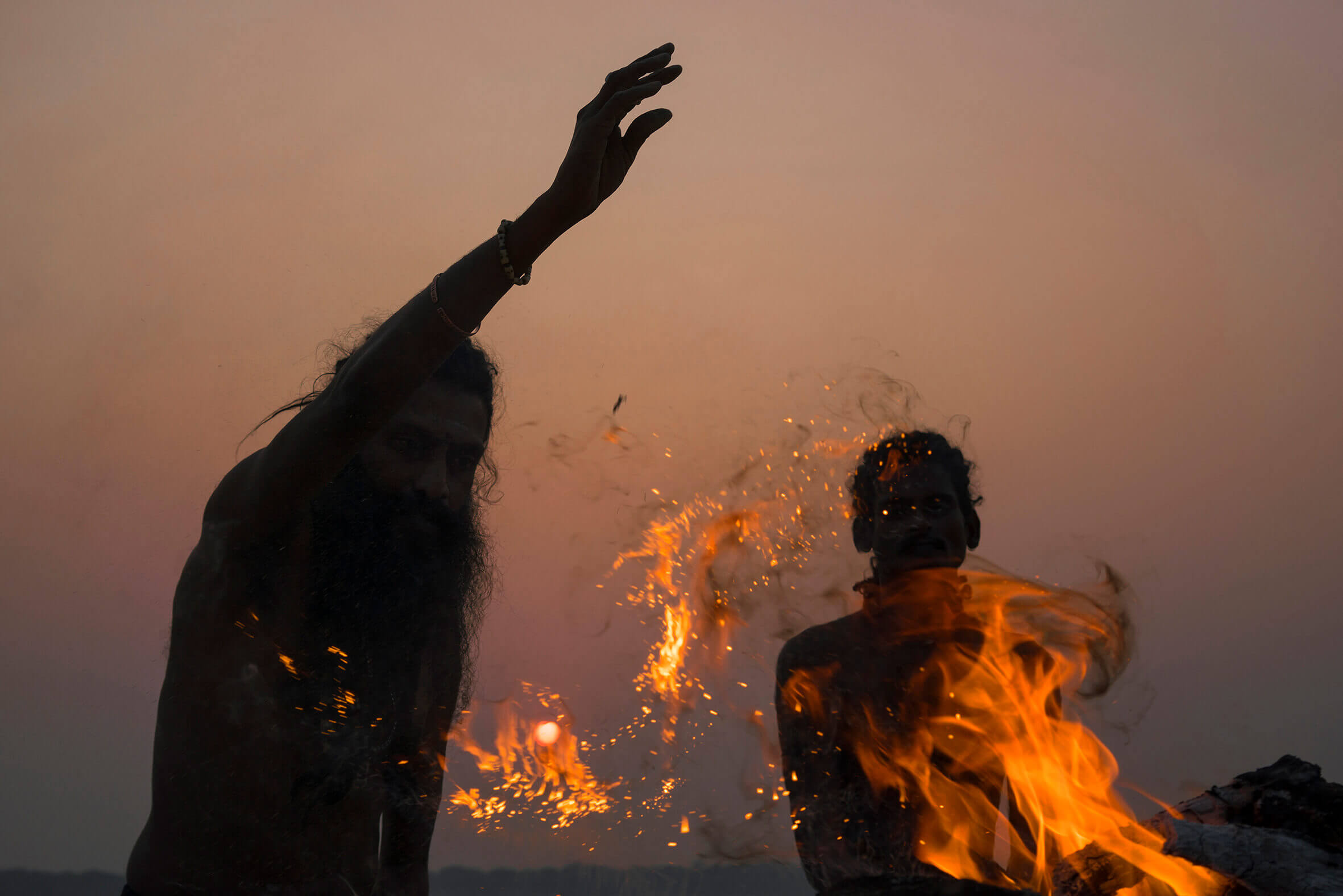 A white sand beach lies on the other side of the Ganges River in Varanasi, India Here, Aghoris perform rituals during the new moon. Baba Ram Mahesh, left, and his disciple Pandi are performing the “Puja,” a ritual in which they chant mantras and offer alcohol and cannabis to a sacred fire, as the god, Shiva, used to do.

It’s 3 a.m. on the cremation grounds in India’s holy city of Varanasi. For the last four hours, six bodies have been burning, one after the other, on a platform in front of the Ganges river. A man with long hair, dressed in full black, recites a mantra as he watches the fire. He belongs to the Aghori, a cult that eats human flesh for specific rituals and uses human skulls and bones for ceremonies and jewelry.
‍

The Aghori believe themselves to be the masters of many spiritual powers; able to cure mental and physical illnesses, saving lives. The man approaches a pile of ashes on the ground, and spreads them over his body and face. “Holy ash is the last and purest state of everything. We spread human ashes all over, to let the body be as pure as ashes,” says Baba Ram Magesh, a 40-year-old holy man who has belonged to the Aghori cult for over fifteen years.

‍
Since the 5th century B.C., the Aghoris have followed the path of Shiva, the Hindu god of destruction. They believe he resides in the cremation grounds, known as shmashana. Aghoris immerse themselves in environments where death is a part of their daily routine. They live and perform their rituals in the shmashana, chanting mantras and making offerings to the sacred fire and the gods.


Aghoris see beauty and brightness in all things That is why, adherents say, they do not feel fear, hate or disgust. Instead, they follow the path of non-discrimination. With the consumption of human flesh, they prove that nothing is profane or separate from God, because for them a corpse lacks the soul it once had. “Why should we differentiate things, if we are all part of nature?” says Baba Ram Mahesh. A true Aghor will keep himself away from killing, he says. Despite their extreme practices and lifestyle,  they will never hurt another person. 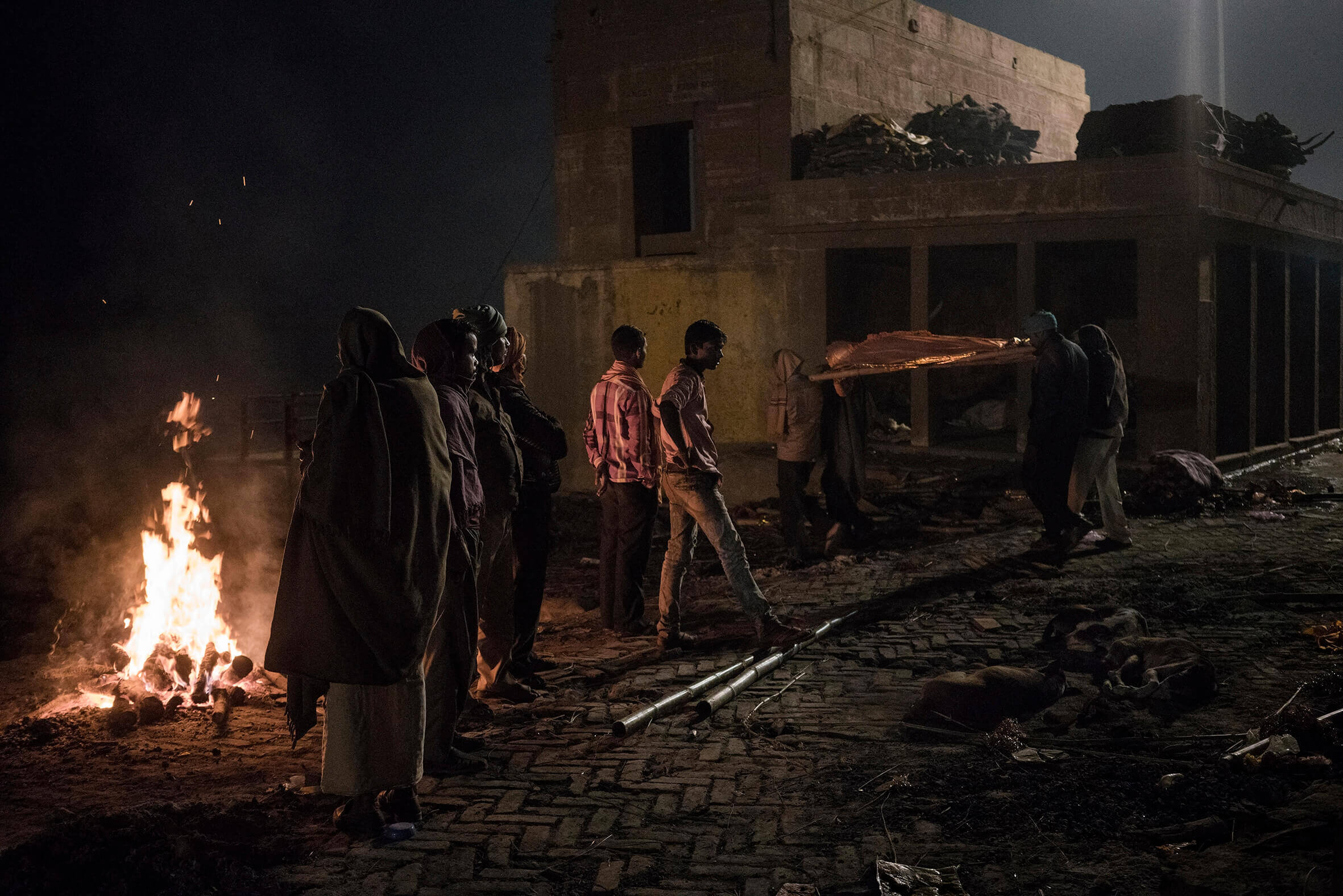 A body is carried into the Ganges River in Varanasi, India, to be washed and purified by its holy power. The body is later placed on a wood pyre for the cremation. Aghoris live and perform their rituals and ceremonies in this place. 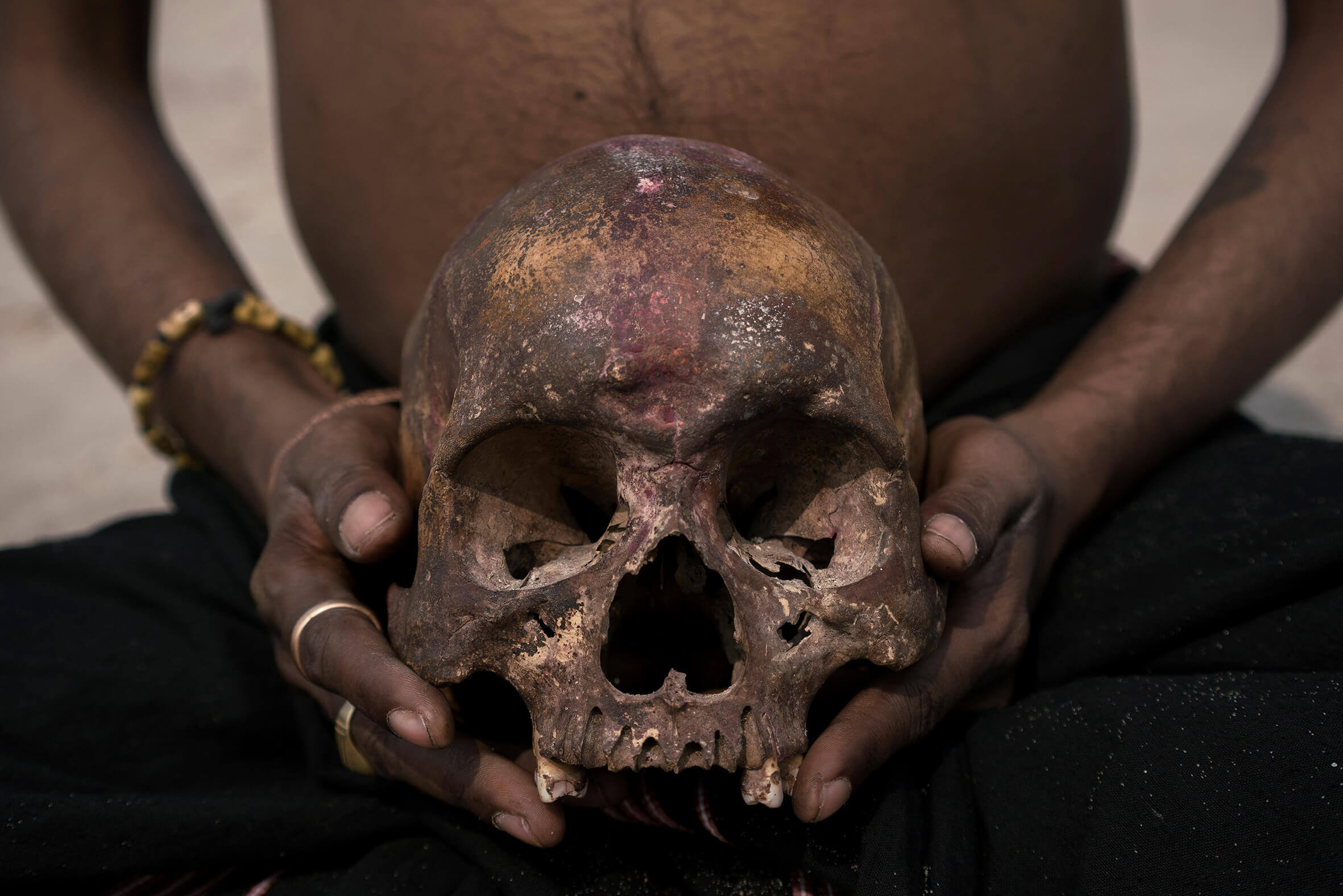 Aghori adherents carry a human skull, or kapala. It is used as a bowl for eating, drinking and ritual practice. It is seen as a reminder that everything is beautiful and pure, because Shiva, the Hindu god of destruction, is present in everything. 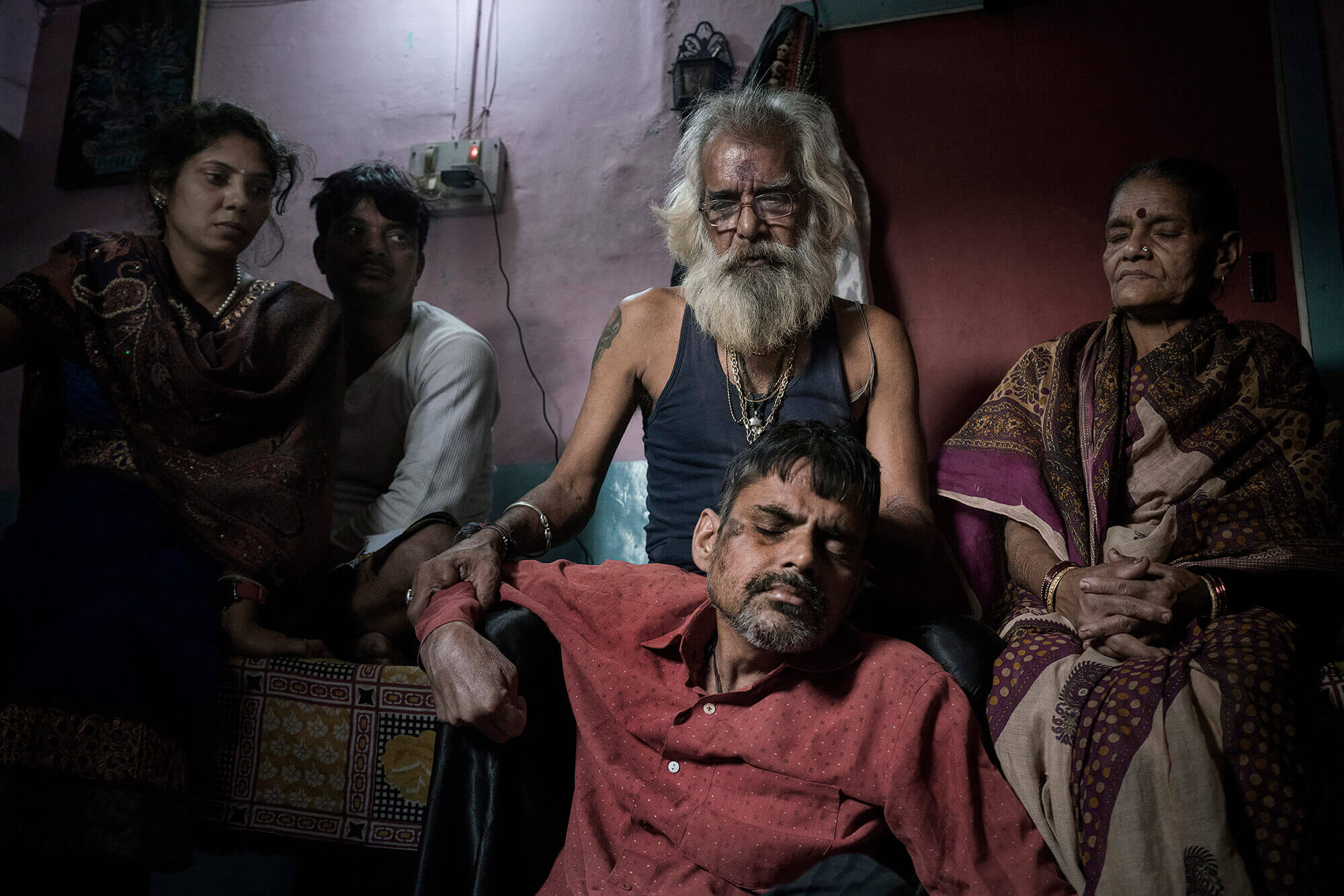 Baba Bambam performs an exorcism on a man possessed by an evil spirit. An Aghori is said to be a master of many spiritual powers, able to cure mental and physical ailments alike. 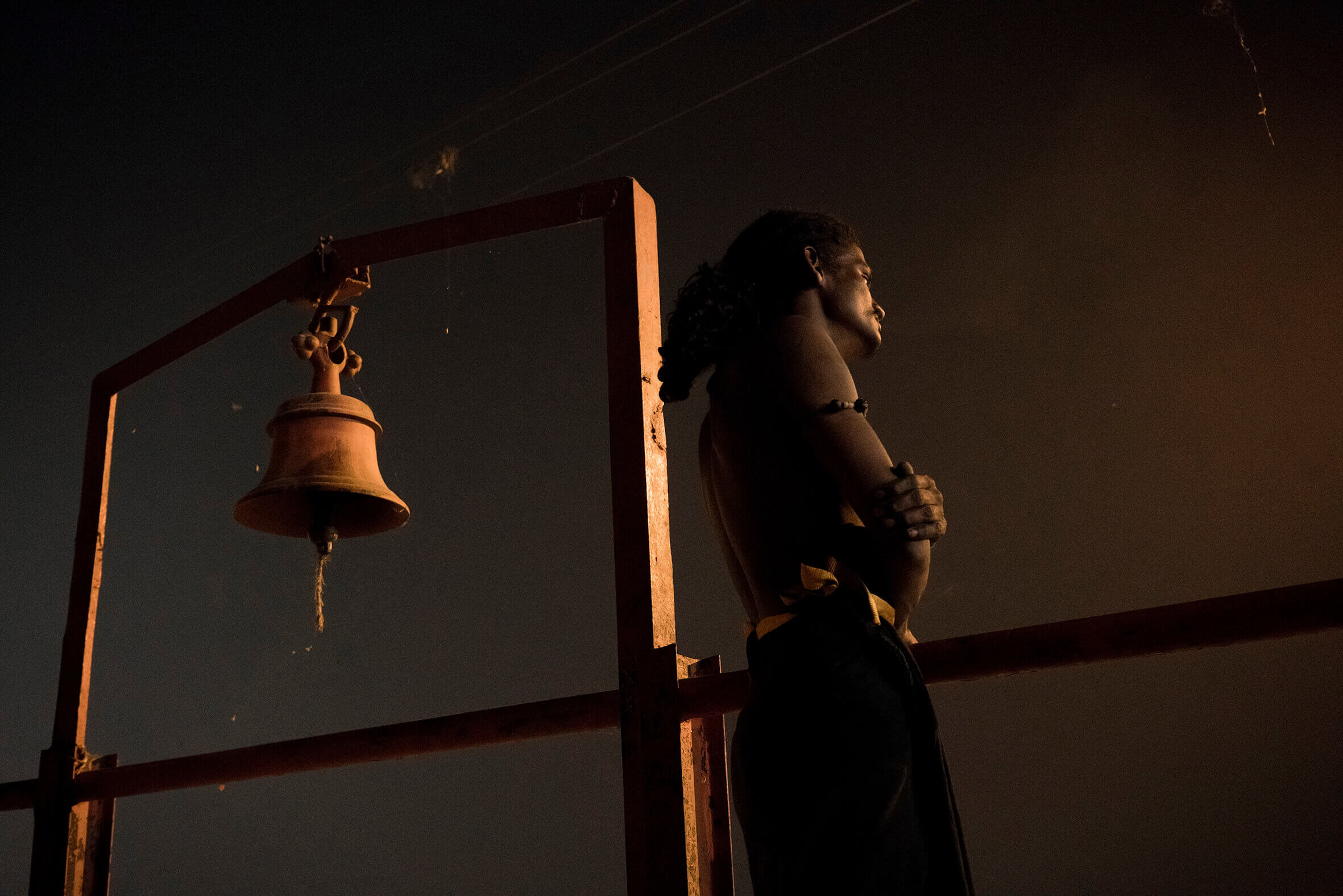 Aghori adherents are more active at night, when they perform rituals and ceremonies. Here, Pandi watches the funeral pyres at 3 a.m. in Varanasi, India; after a ritual in a temple of Kali, the protector goddess of the cremation ground. 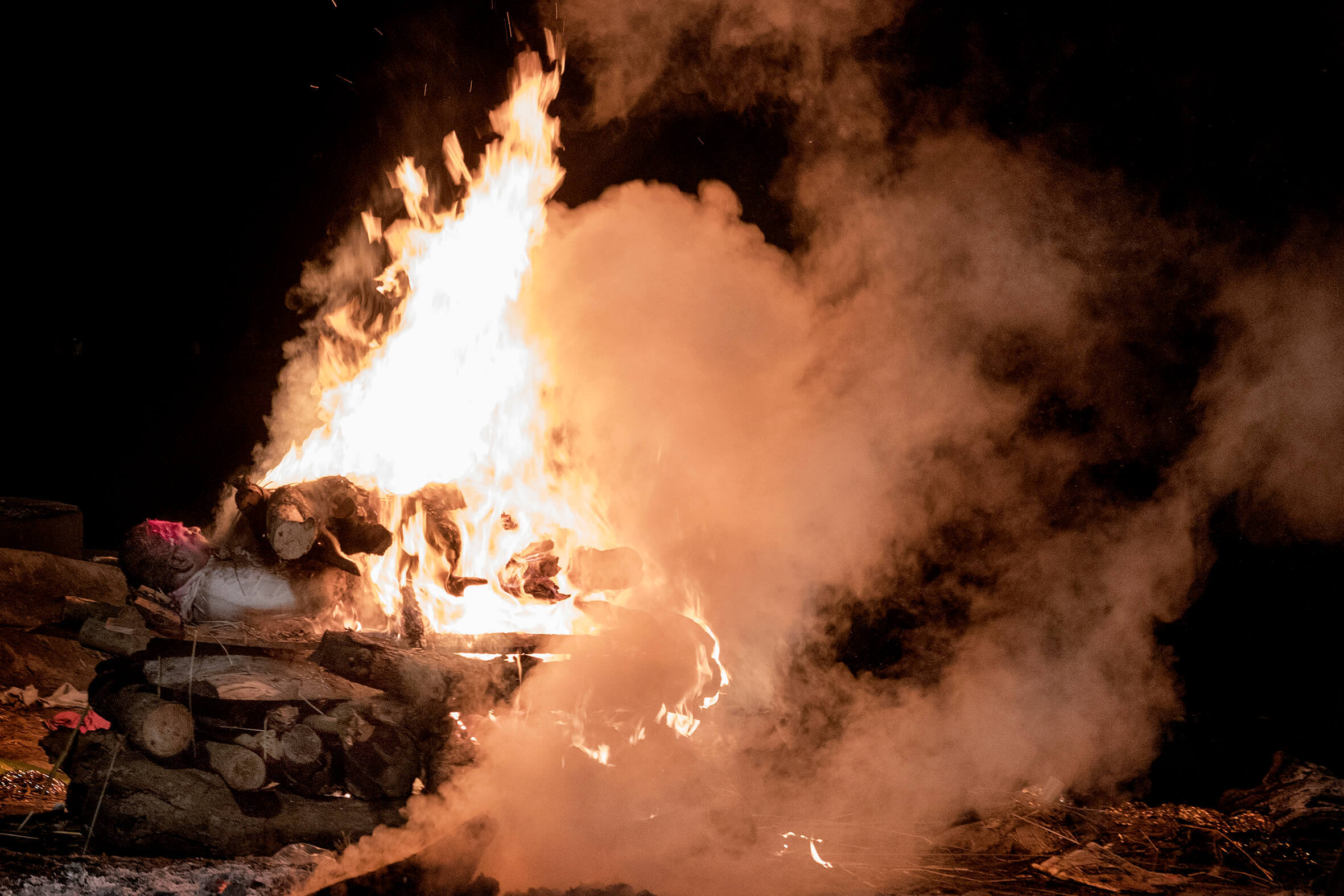 The body of a Hindu man is cremated at the Harishchandra ghat cremation ground. This ghat, home of the Aghoris, is one of two places for this ritual in Varanasi, India. They run around the clock, burning around 100 bodies a day over the course of the year. 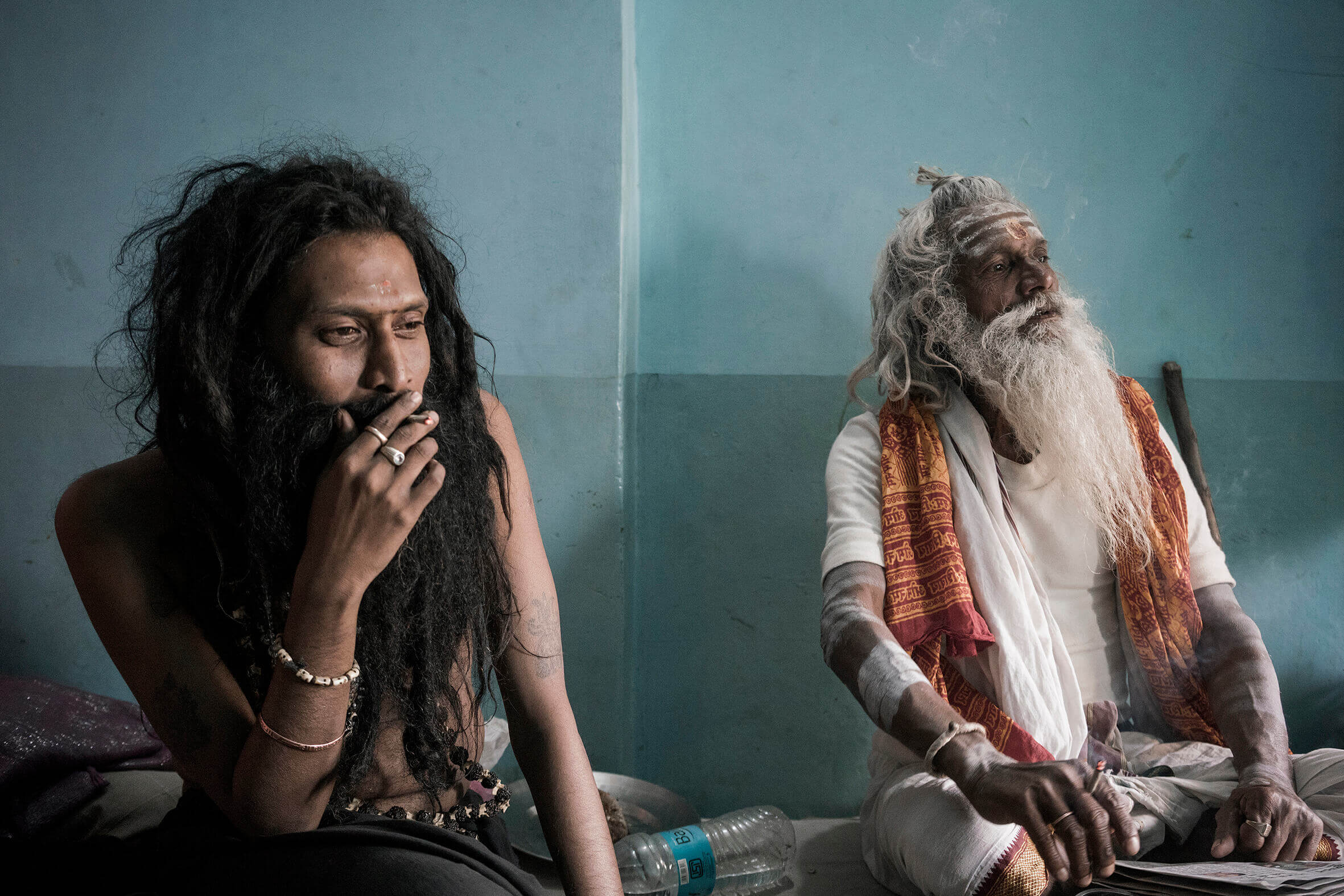 Baba Ram Mahesh, left, shares an intimate moment with Baba Vijay Nund. They are both holy men from the Hindu religion, but differ in philosophy, lifestyle, and their rituals. 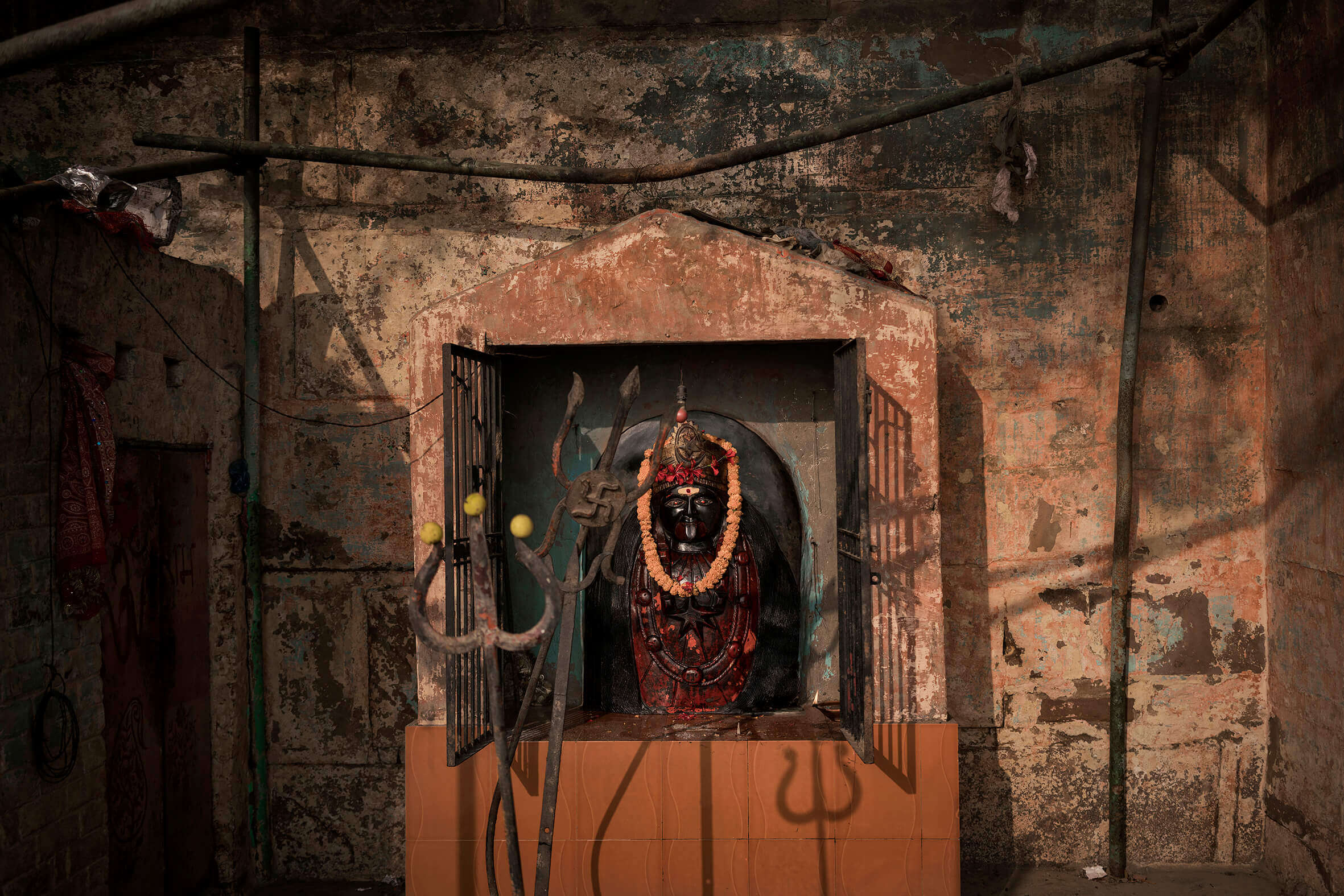 A statue of Kali, a Hindu goddess believed to be the protector of the cremation grounds, is seen in Varanasi, India. Kali is responsible for cutting the link between life and death, ending the cycle of reincarnation. 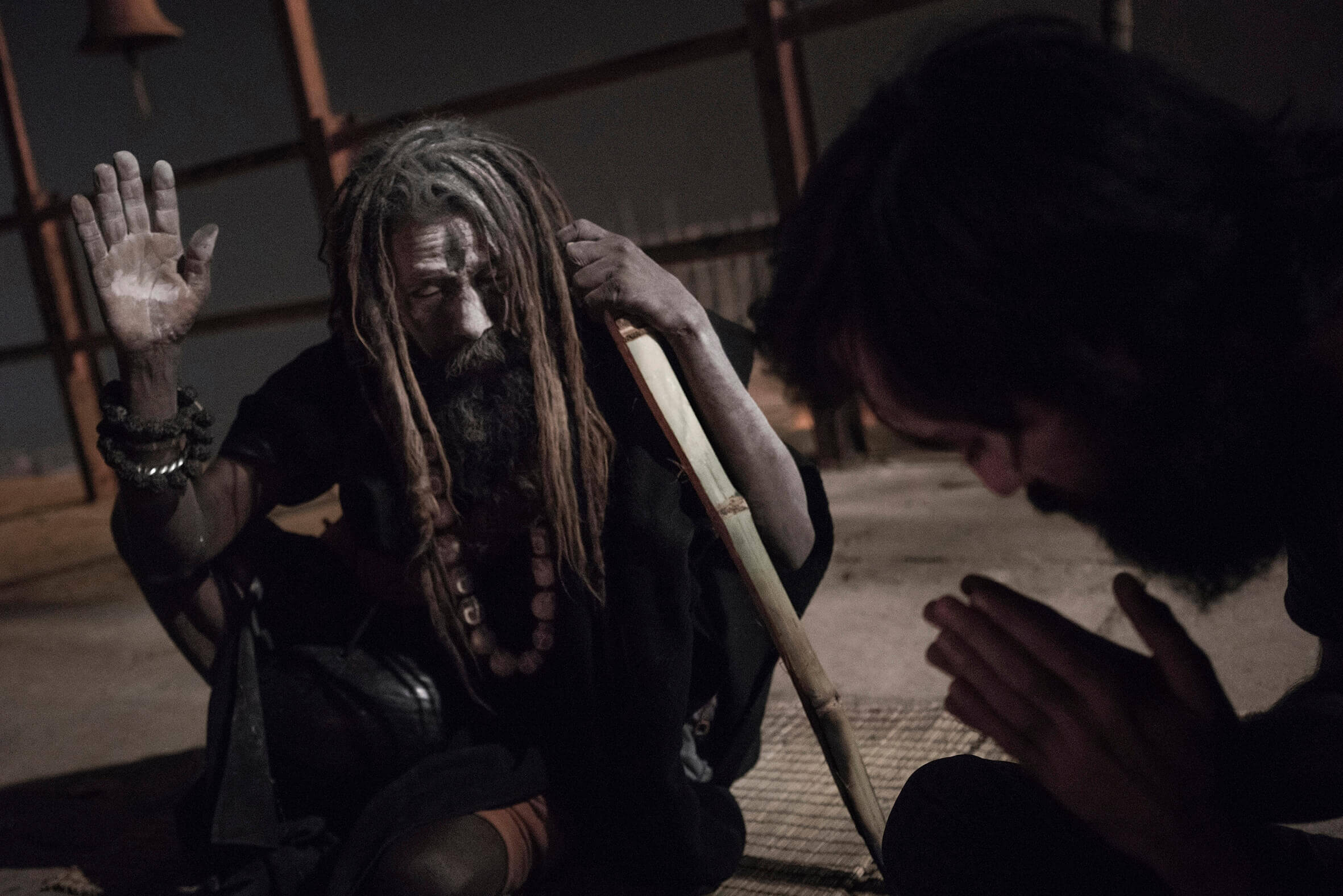 Baba Chintaharan has belonged to the Aghori sect for over 20 years, teaching and passing its philosophy on to new members. Here he takes part in a ritual held at Kali’s temple in Varanasi, India, and gives his blessing to everyone who reaches it. 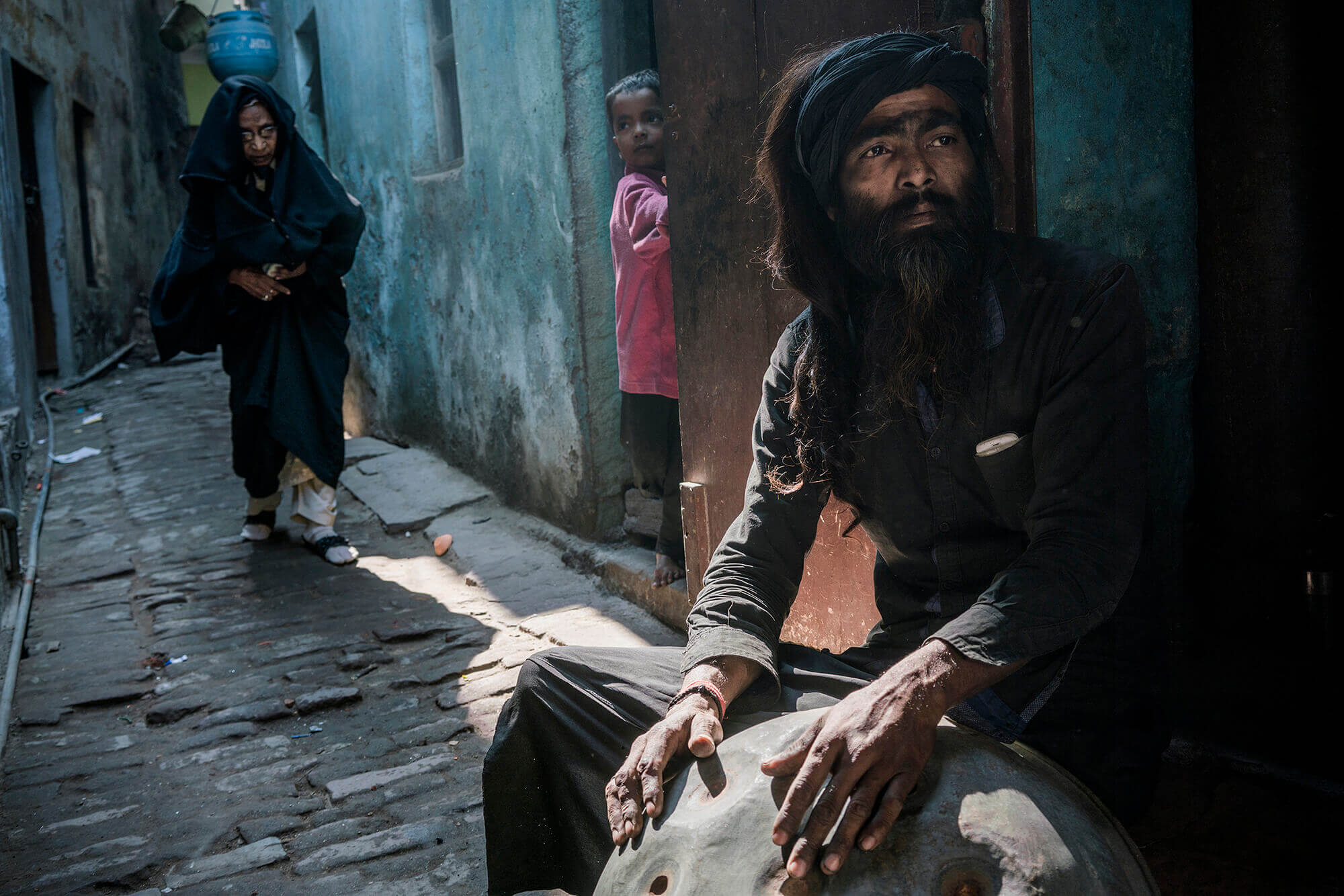 Aghoris must abstain from sex, as doing so is believed to allow them to increase their spiritual energy. Anil, right, fathered three children before joining the Aghoris. He was admitted to the cult under the condition that he follow their philosophy in the future. 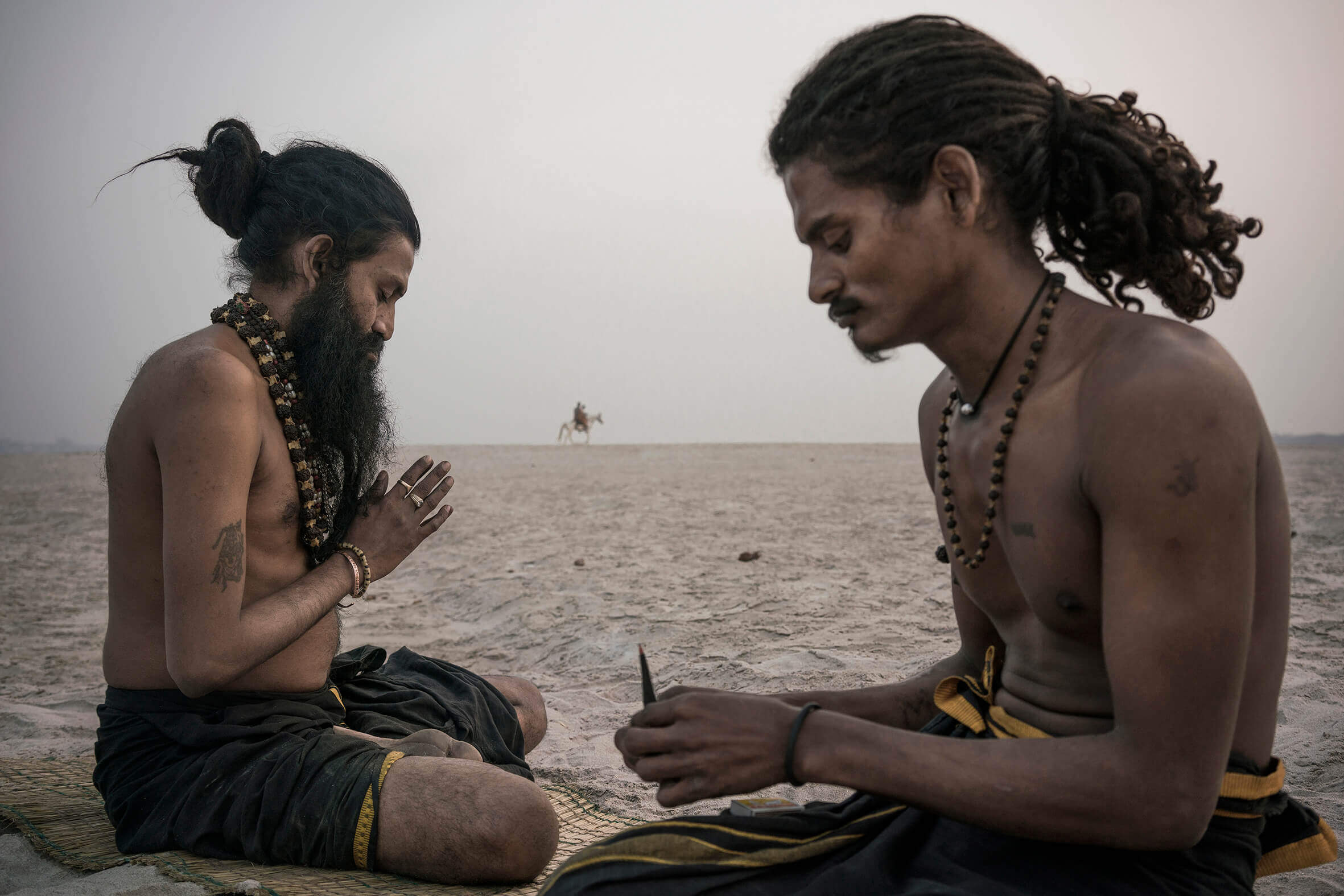 To become an Aghori, each member of the sect must spend at least 12 years learning from a personal mentor, or guru. Baba Ram Mahesh,left, is the guru of Pandi, who has practiced with him for almost five years. 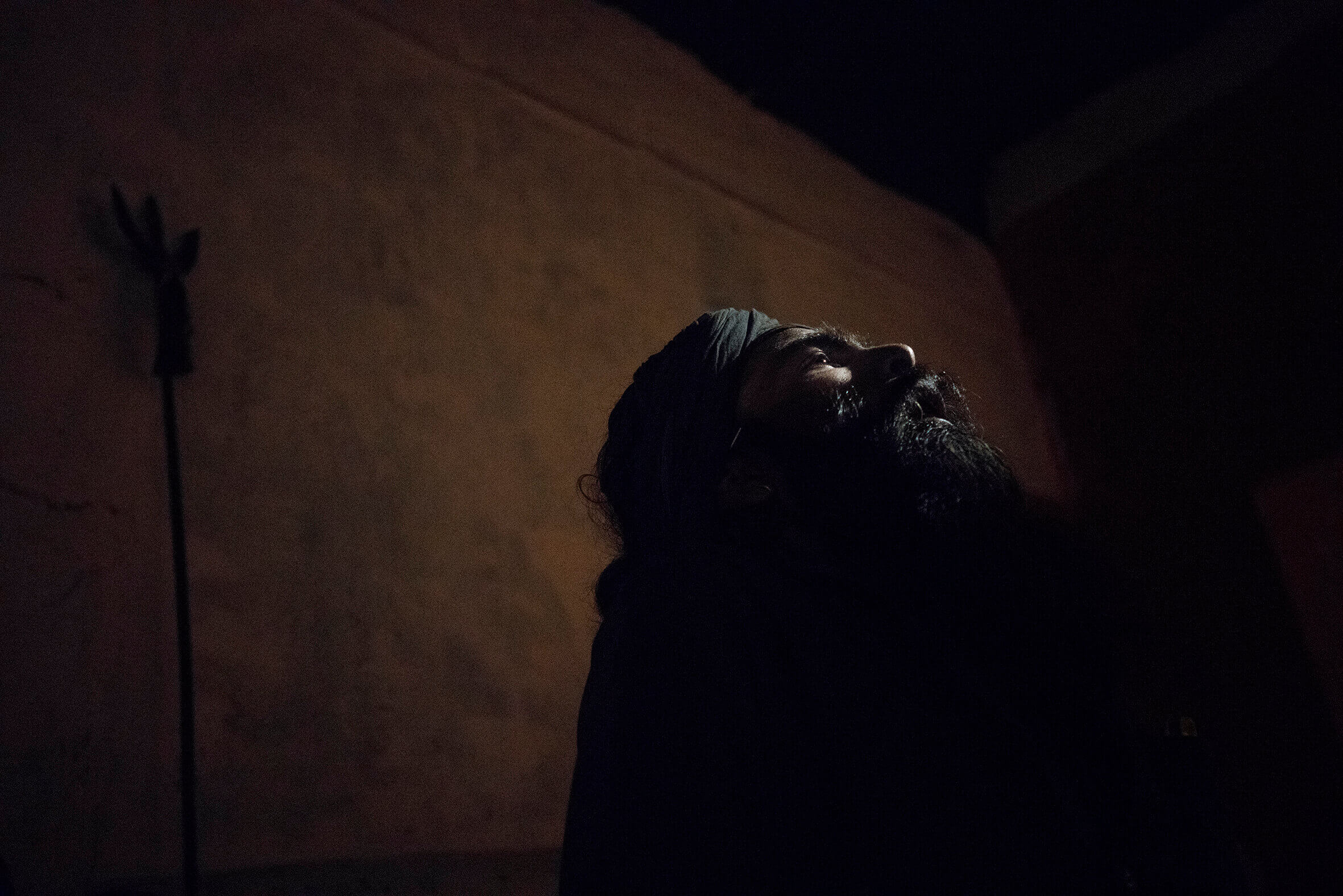